A Quartet of Cool Cavas To Combat Climactic Calefaction

Finally!  A story involving Formosa that is totally unrelated to a bunch of Chinese casino millionaires scooping up bellwether French estates and paying such premiums for futures that you and me can no longer afford the wines.

If this keeps up, Chinese moms will soon be saying to their kids, ‘Finish your Gevrey-Chambertin; little children are going to bed sober in Burgundy…’

In fact, this story doesn’t involve Chinese people at all.  Or casinos.  Or the French.  Or Formosa, now that I think about it.

It has to do with Vallformosa.

And it has to do with cava—that loveable, laughable, lyrical libación from Catalonia.  Spanish spume; Barcelona bubbly; espumoso de España.

Cava is Castilian for ‘cave’, and is somewhat dated is in defining the wine as only a small portion is thus stored today.  But, it was a second choice anyway:  Until the European Union stepped in, cava was called ‘Spanish Champagne’, a nod to champenoise traditional, the method still required in its production.  But one of the mandates of joining the Union was adherence to Protected Geographical Status (PGS) laws, and one of them states that anything called ‘Champagne’ must come from Champagne.  Today, the wine bears a clumsier, cluster cognomen—‘vino Espumoso de Calidad Producido en una Región Determinada’ or VECPRD—which translates to, ‘Good bubbly, but not exactly Champagne’.

Other than means of production, cava has only the sparkle in common with its French cousin.  Made primarily from macabeo, parellada and xarel·lo grapes, the vast majority of them grown in the Penedès in Catalonia, cava is generally simpler, nuttier and more direct than Champagne, which prizes nuance and depth; this is in part due to the flavor profiles of the allowable grapes, but more so from the warmer climate—which further ripens them—than in the cool climate of Champagne.  Not with exceptions, of course, cava is a drink for the for  pasture than the parlor.

Central to the Spanish sparkling wine industry, and home to the largest cava corporations (Codorníu and Freixenet) , is the village of Sant Sadurní d’Anoia.   Otherwise unremarkable, Sant Sadurní has a population of under thirteen thousand—roughly the half the size of Savage City, Minnesota.

Vallformosa is a family-owned winery, currently under the management of the fifth generation of the Domènechs.  It was established in 1865, a decade before the phylloxera plague killed off most of the red grape vineyards of Penedès, leading to a widespread experiment with growing white grapes.   Today, Vallformosa produces wines in several prominent Spanish D.O.s, including Penedès, Cava, Catalonia and Rioja.

Incidentally, the name ‘Vallformosa’ means ‘Beautiful Valley’, and has the same root adjective as ‘Ilha Formosa’—the original name that the Portuguese gave to Taiwan.

Among a set of Vallformosa sparkling wines I recently sampled, a few were some puntos pullers, including Brut Pinot Noir and high-end ‘Gala’.

Keep the following tasting notes under your hat, though.  We wouldn’t want Vallformosa’s vineyards to be snapped up by a bunch of ferocious Formosans, would we? 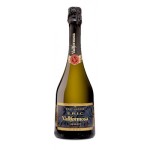 Vallformosa Pinot Noir Brut Cava D.O., Alto Penedès, Spain, around $25:  Cherry red with ruby tones; aromas of Creamsicle, strawberry, orange marmalade with fine, persistent bubbles.  Rosé cava can be a cynical beast, but this one presents round, sensual flavors of summer berries and citrus.  Racy, crisp and refined with a fruit-filled finish.

Vallformosa ‘Gala de Vallformosa’, Brut Gran Reserva, D.O., Alto Penedès, Spain, about $45:  Pricey for a cava, but in terms of pure finesse and harmony, worth it.  Resplendent with fresh pear scents, ripe figs, almonds and orange.  From a swirled glassful, aromas of apricot arise along with honey and baked bread.  Lithe, creamy, with spice notes and lovely length.

This entry was posted in Penedès, SPAIN and tagged Spanish cava, Vallformosa. Bookmark the permalink.