Is Wine Bullshit? Or Would That Be Alex ‘Kiss’ Mayyasi’s Skill Sets?

In the past three days, by crook, hook or pure untrammeled coinkydink, I have been forwarded links to three separate articles pointing out the already-understood and well-documented limitations of wine competitions, wine tastings and wine appreciation in general.  Two of the three articles use the big-boy potty-mouth word ‘shit’ in their scareheads; the third uses ‘junk science’.

Pretty Megs all in a row

Before I tear these wine-challenged loony-tunes any new orifices from which the very ‘s’ word emanates, let’s discuss the use of such (as my buddy Meg Houston Maker calls them) ‘purposefully provocative headlines’.  I am sure Mr. Gonzalez giggled like a schoolgirl when he flexed his newfangled internet swear-word freedom.  Mayyasi, too: He wears a literary curse-smirk akin to the grin he wore when he snuck his first beer from Dad’s cellar stash.  It’s a grin best described as ‘shit eating’.

Dudes, here’s the thing: Street talk has a specific place in responsible blogging.  I get that, and I am certainly not immune to its value in occasional carefully-considered circumstances and contexts.  Tacking it onto a headline is taking a mega-risk; it’s like wearing a t-shirt that says ‘Hey, everybody, look at me!’  Careful what you wish for, because once everyone is, in fact, glancing in your direction, you better hope you intend to bring something to the party other than poorly-researched bullshit.

Lede:  ‘The human palate is arguably the weakest of the five traditional senses. This begs an important question regarding wine tasting: is it bullshit, or is it complete and utter bullshit?’ 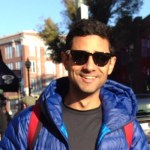 Well, I am not sure if Gonzalez has entry-level training in wine appreciation, but if he has, he slept during the first ten minutes.  Because that’s when we assure you that the biggest part of wine tasting is not in the mouth where the palate is located, but in the nose, where hundreds of olfactory receptors that bind to a particular molecular feature are located.

Gonzo proceeds to quote a single wine critic (term used loosely considering that blogger Joe Powers’ entire claim to wine education is a few Sommelier Guild hours at the University of Texas) and who evidently confesses that what he himself writes is (Urban Dictionary definition of ‘bullshit’):

‘A blatant lie, a fragrant untruth, an obvious fallacy’.

Speak for yourself, Toledo Joe.  While you were learning how to hold a champagne flute in Austin, some of us were taking a course called Journalistic Ethics which prevents us from printing things as fact that we know are bullshit.

Claim: ‘In 1996, research published in the Journal of Experimental Psychology concluded that wine experts cannot reliably identify more than three or four of a wine’s flavor components. Most wine critics routinely report tasting six or more.’

Gonzo then proceeds to quote a ‘real review’ that is so far over the top that he must have had to search far and wide to find one this asinine simply to make his point, as though it were typical of wine blurbs, not exceptionally idiotic wine blurbs.

But, to the point, he fails to indicate where the excerpt came from so that we could fact-check him. Nor does he use quotation marks around the quote.  In Journalistic Ethics class, the prof called this ‘plagiarism’.

Neither does he cite sources for his claim that ‘most wine critics routinely report tasting six or more flavor components.  I don’t claim that, and for the record, in a random sampling of ten Robert Parker Jr. reviews, the grandfather of gustatory gushology averaged four flavor component descriptors per wine.  Jancis Robinson, three to four; both, right on the money according to the nearly two-decades-old JEP study.

Verdict: Bullshit is as bullshit does.

Lede: ‘A Lafite Rothschild Bordeaux sells for a minimum of around $500 a bottle, while humble brands like Charles Shaw and Franzia sell for as little as $2. But as far as “wine economists” are concerned, the level of correlation between the price of a bottle of wine and its quality is low or nonexistent. In a number of damning studies, they suggest that wine is not just poorly priced, but that the different tastes we describe in wine may all be in our heads.’

‘Wine economists’?  Seriously, Alex?  Let’s name names, wanna?  If you can find me one who really believes that a Two Buck Chuck, vintage February is the sensory equivalent of a 2005 Lafite Rothschild, I will personally send you five hundred and two dollars so that you can pick up one of each and do your own blindfold test.  If you still stand by your statement, keep the change, but turn in whatever credential you feel gives you the space to talk about wine with any brand of authority.

And as for ‘the different tastes’ we describe in wine as being ‘all in our heads’, last time I checked, that is precisely where our gustatory perceptions and ability to form articulate opinions about them are located.

Claim: ‘People in the wine industry admit certain shortcomings; that large-scale tastings dull critics ability to identify and enjoy wines, that scales ignore the subjective aspect of taste, or that 75% of the price is cache.

Why is that when somebody wants to critique the ability of wine critics to critique wine, they always bring up wine competitions and ‘large-scale tastings’?  And rating scales?  Personally, I have a congenital opposition to numerically rating wines and have never done it once in twenty years of wine writing.  And I have judged enough competitions and sat through large-scale tastings to proclaim loudly that they are, for the most part, bullshit.  But in that case, your headline reads ‘Are Large-Scale Wine Tastings Bullshit?’  Not ‘wine’.

But, I can assure you without fear of argument that 75% of price is not cache, and I challenge you to let me know who in the industry led you to believe otherwise:  It certainly wasn’t a vineyard owner.  For reference, an acre of prime, planted grapeland in Napa goes for around $300,000; even with moderate pulls of 4 tons per acre, that’s around 240 cases, 2880 bottles, or about a hundred dollars per bottle before farming and labor.  Obviously, the price of a bottle of wine involves far more cash than cache.

Claim:  ‘The best wine tasters in the world, formally speaking, are Master Sommeliers.’

I’m sure the Institute of Masters of Wine would argue that, so I leave it to them.  But…

Related claim:  ‘What makes Master Sommelier Steven Poe an expert is how he brings his formal knowledge of wine production to what he tastes. For example, Poe would be familiar with the flavor outcomes of malolactic fermentation In a blind tasting, he might notice one of the flavors associated with the process—a buttery texture, for example.  This could help Poe narrow down a wine’s region and vintage.’

Trust me on this, Alex:  You couldn’t have picked a worse example.  You don’t need to be a Master Sommelier to recognize the buttery quality that malolactic brings to the wine table, nor do you need to be a Master of Wine to know that secondary fermentation is practiced to some extent in every wine region in the world and in every vintage that God sends, and it would be a very peculiar tool for Mr. Poe to use to try to narrow those down.

Verdict:  At least Alex Mayyasi titles his strange column in the form of a question, which allows for an answer.  And here it is:

‘People’ is pretty all-inclusive, David.  Are you sure you don’t want to rethink that statement?  While you are considering it, let’s do a quick reference check of what ‘junk science’ actually means.  According to Oxford English Dictionary:

Junk Science: Untested or unproven theories when presented as scientific fact, especially in a court of law.

Fortunately, the definition did not say Court of Master Sommeliers, because their entire purpose is to test and prove that a given people candidate can not only tell plonk from Grand Cru, but isolate which particular Grand Cru he/she is tasting.

Claim: ‘One US winemaker claims that even experts can’t judge wine accurately’.

Derbyshire is speaking about Robert Hodgson, a retired oceanographer who operates the Fieldbrook Winery in Mendocino.  Hodgson has, since 2005, run experiments at the California State Fair where he ‘tricks’ a panel of tasters by serving the same wines over and over and analyzes the results.  His findings have apparently shown that even trained, professionals are terrible at judging wine.  And thus, scribes like Derbyshire, along with Mayyasi and Gonzalez—both of whom also reference the Hodgson experiment—gloat and giggle and berate us poor, benighted sad sacks who dare to trust our own palates and think that we can tell a crude Boone’s Farm from a Cru Beaujolais when obviously, we can’t.

Here’s a final thought for them, however:  Access Fieldbrook’s website and note that Mr. Hodgson’s introductory statement is, ‘Fieldbrook Winery is recognized for producing medal winning wines in both national and international wine competitions for over 30 years,’ then proceeds to proudly list over ninety awards and medals his wines have taken at various competitions, including the California State Fair.

Messers. Derbyshit, Gonzoloid and Mayasshole:  Yes, everyone in the wine industry knows—and no one more so than Robert Hodgson—that that the most useful purpose of wine competitions is to provide marketing fodder to distributors, tasting rooms and retail shops which they then use to sell wine; nobody claims any high and mighty flawlessness and guaranteed consistency about them.  Sorry to break it to you, but the same goes for all competitions for all products everywhere.

Derbyshire goes on to quote Richard E. Quandt, a Princeton economics professor whose paper ‘On Wine Bullshit: Some New Software?’ quakes before  an ‘unholy union’ of ‘bullshit and bullshit artists’ who are impelled to write about wine.

That would be me.

7 Responses to Is Wine Bullshit? Or Would That Be Alex ‘Kiss’ Mayyasi’s Skill Sets?