Not saying that they are all simply crackers pastoral folk in Languedoc-Roussillon, that hillbilly heaven bucolic land in the south of France, but here is their recipe for Bœuf Bourguignon, one of the most beloved classical dishes of French culinary antiquity:

People who follow this column with any degree of regularity know that about 80% is made-up on the spot, the product of a deranged, feverish and generally drink-soused mind.  But this one is absolutely true; at least the ingredients part.

Languedoc-Roussillon winemaker Jean-Charles Tastavy and his partner, cow-cropper Claude Chaballier came across a study that suggested that happy cows produce tastier steaks, and being French, they knew instinctively that only four things make French people happy:  Festivals where you have to wear a wig, dogs the size of voles, making fun of British people and drinking wine. 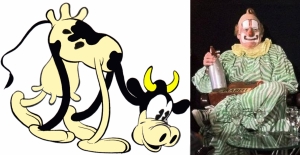 They also knew instinctively that only one of the four was a feasible option for Clarabelle.  At first, Jean-Charles donated his grape leavings, but the pair soon went with full bottles of wine.  Calculating the feel-good amount of wine for human beings into a Queen Latifah-type conversion, decided that two bottles, once a day, would have Elsie jumping over the moon.

But What About The Cost, French People?

That was my first question.  But after a short stint in research-ville, I learned that the average cow at say, 1000 lbs, eats around 50 pounds of food a day.  Purina Cow Chow—there actually is such a product, though it goes by Accuration Sup-R-Lix—runs $515 per ton, making the daily cost of cow feedage around $20.

Figure that by going with Two Buck Yuck, wine would only add four dollars to the equation.

And considering that meat from Claude Chaballier’s wine-wasted bovines tips the scales at $50 per lb. (it said to be sensational), the whole wacky notion begins to make perfect sense.

Except for one tiny little issue:

Drunks don’t particularly care for grass and silage; they eat stuff like Little Caesar’s Pizza Pizza, 7-layer burritos from Taco Bell and—especially if they are ghetto cows and it’s three in the morning—buckets of Popeye’s fried chicken.  That, I think, is the ‘x’ factor that would ultimately throw the whole experiment into irretrievable, unmitigated financial chaos.

And yet they carry on, those Languedoc troupers.  They’ve even named their  beef ‘Vinbovin’, French for ‘wine cow’.  How superlatively imaginative of them, non?

At any rate, consider that feeding a Vinbovin on Hungry Howie Value Meal Number 4s, as they surely would demand—and like most slobbering, hootched-up sots, probably not pleasantly—and you’ve taken their food cost to an unmanageable, totally ridiculous $500 per day!!

Methinks that some French clodhopper dairy farmer out there in the boonies has contracted a touch of the ol’ Mad Cow Disease.