I Am Woman, Hear Me Pour: The International Women’s Wine Competition

People are always winging on and on and on about things they hate—Monday mornings,  the Westboro Baptist Church, Rush Limbaugh, root canals, giant spiders in the basement, the U.S. military massacring innocent Iraqi civilians…

Yeah, granted, all that stuff blows the whaling wiener.  But, do you know what I hate?  I mean really hate? I hate that just because I have a Y chromosome, seven kids that call me ‘Dad’, great fuzzy bollocks and a trendy goatee, people automatically assume that I’m a man. 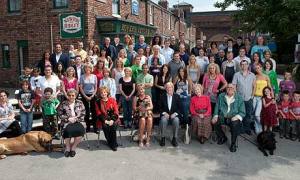 I am the only man in America that cried when Betty died.

Because you know what else I have?  (Of course you do, I post about it ad nauseum on Facebook): I have an effeminate flower garden, a girly dehydrator in which I make chicky chick chick-schtick like sourdough bread, yogurt and dried gay fruit, a television tuned permanently to Coronation Street, a juicer I use to make drinks for which my strapping teenage sons mock me, (including a fresh, healthful, scrumptious blend of celery, apple, carrot and beet—the recipe is available for a nickel).

So really, at the end of the day, when all the estrogen is added up and all the testosterone subtracted and St. Peter hands me my halo—either pink or blue—I think I’m on the short list for one with unicorns, bunnies and rainbows.  Made by Uggs.  Over brunch.  At Nieman Marcus.

As a result, you know what else I hate?  I hate that I can’t enter my shitty basement wine into the The International Women’s Wine Competition, to be held on September 18 in Santa Rosa, CA.  They don’t want my $75 entry fee, they don’t want four (4) 750 ml bottles or six (6) 375 ml bottles of my half-assed syrah, and I am reasonably confident that they don’t want my throbbing you-know what anywhere near their competition.

My mom with a teapot full of my basement syrah.

As Vineyard & Winery Management magazine (the contest’s producer) and Womenwine.com (official media sponsor)  make abundantly plain, the IWWC is for, about, because of, and judged entirely by women, who—according to a survey conducted by  Vinexpo 2009—purchase eight of every ten bottles of wine consumed at home.  So, it makes total sense for them to aim a competition directly at those wanker-challenged, eight-of-ten buying felines to (and I quote) ‘help professional wine buyers and consumers identify wines that women enjoy – and ultimately help wineries sell more wine.’

Helga aiming for the family jewels.

And to ensure complete and utter rule compliance, the IWWC has engaged Helga, She-Wolf Of The SS—out of work since 1945, incidentally—to check the squish of every single entrant prior to judging.

So Be It, Helga 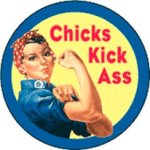 I will concede the ownership of a slightly under-sized doinker, a couple of kerbangers, some chest hair and a non-lesbian craving for members of my species who do not possess such things.

Therefore, International Women’s Wine Competition, I suppose I have only one question for you left:

Does this wine make me look fat?

This entry was posted in GENERAL and tagged Iinternational Women's Wine Competition. Bookmark the permalink.