Moscatos and Mosquitoes: Summer In The Motor City

Whenever I travel this wide and wonderful land, wherever I go—from purple mountain to fruited plains, beneath spacious skies and through amber grain waves, from sea to shining sea—I tell people I’m from Detroit and the response I get is the same:

‘Oh well, geez, dude; I guess everybody has to be from somewhere.’

Among outsiders, Detroiters face a sort of cautious, kid-gloves pity—the result of murder stats of around 50 humans per 100,000 (compared to a national average of 7 per 100,000), a housing market that leads the nation in foreclosures with a third of the city living in poverty, a school system in which a first-year student has a better chance of going to jail than graduating and weather patterns so insanely awful—constantly humid and often either below zero or (like now) above 100.  In fact, to find somewhere in the solar system with worse weather than Detroit, you’d have to go all the way to the Galilean moon of Io with its four hundred active volcanoes, atmosphere made of atomic sulphur and temperatures averaging minus 262° F.

“Oh, Daddy! You stole me an air conditioner!”

Our Rep Takes a Rap, But At Least We Haven’t Rioted in a While

And by we, of course I mean they—I don’t want any trouble.  I’d rather kick back on the porch, suck wine and watch mosquitoes the size of sparrows embrace destiny as they are systematically electrocuted on the high voltage grid of my stolen Blackflag Bug Zapper while I—judge, jury and vicarious executioner—ponder the poetic enigma of reality, wherein people zappers have been replaced by more humane lethal injection, which we’d also do for the mosquitoes if we could figure out how to get the needle into those skinny little arms.

And also, I ponder a more universal puzzle: How the hell did a bunch of urban street-kid rappers out there in mileage-free Lexus Land decide that moscato, one of winedom’s best-kept secrets, should be the sudden trendy hip-hop ‘it’ bevvie of choice?  Isn’t that why God invented Salon?

Nonetheless, the gangsta geeks have been name-checking moscato like crazy lately:

Kanye West: ‘Hypno, Cris, though, I mean whatever; Saracco Moscato, it do taste better.’ (Make Her Feel Good)

Ab-Soul: Dolphin pills and moscato spills; Everything she need to get her thrill; No Hennessy on the bartender bill; Just a good wine and a good place to chill’ (Moscato)

Drake: ‘It’s a celebration clap clap bravo; Lobster and shrimp and a glass of moscato.  Let’s finish the whole bottle.’ (Do It Now)

Genuine, if random hip-hop status post (verbatim): ‘OK I just had the funniest shit happen I went 2 the store 2 get some moscato & this bitch gone tell me we don’t have any of Sutter Home moscato cause the distributor ran out of grapes.’

Being that moscato, and its frizzy cugina Moscato d’Asti, are fairly obscure wines, the reason for its sudden, chart-rocketing hip-hop popularity are likely one, or all, of the following:

Whatever the motivation, moscato has managed to not only tap a previously elusive wine demographic, but to strip mine the entire mountaintop away.

Twenty-something African Americans on a limited budget, who have previously managed to duck wine marketers with the efficiency of a dead-beat dad dodging an F.O.C. warrant, are now at least partially responsible for moscato being the fastest growing varietal in America.  According to Danny Brager of Nielsen Research Analysts, sales of moscato-based wines (including Asti Spumante) have increased a gobsmacking 95% since 2010, mostly among ‘Millennials’ (17 – 34) and Hispanics.

‘This is explosive growth,’ Brager brags.  ‘A couple of years ago, moscato wasn’t even on the list of top 12 varietals.’

Like any rapper worth his bath salt, moscato changes its handle to suit the occasion.  More than two hundred unique varieties of the grape exist, with associated nicknames numbering into the thousands—likely due to its antiquity.  Moscato was one of the first varietals to be cultivated commercially, probably in Greece. 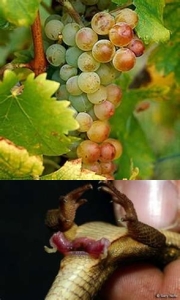 Can you tell the difference?

In the English speaking world, of course, the most common name is muscat—a reference to the wine’s so-called musky aromas.  ‘Musk’ is defined by Funk & Wagnalls as dried glandular secretions from the cloacae of Central American alligators, Asian civets and longhorn beetles (among other species) and named after the Sanskrit word for ‘testicle’.   I’ll sign off on all this unpleasantness once you introduce me to the wine writer who first squatted down and sniffed an alligator’s anus for reference or licked a beetle as a sanity check; until then—unless a civet’s butt secretions happen to smell like honeysuckle, orange blossom and nectarine—I will have to confess that I miss the sensorial musk connection entirely.

Anyway, the grape more than likely traveled from Greece to Southern France in the 13th century, where it settled in among the viognier and syrah and today produces fortified dessert-style wines in the Frontignan and St-Jean Minervois regions.  A few hundred years later, it found amazingly accommodating digs in Alsace, where unlike the sweet wines of Languedoc-Roussillon, it is vinified to compete dryness.

Drake with his moscato.

In Italy, it is planted everywhere and produces wines of all descriptions,  but the style that originally tweaked hip-hop’s twinkies was Moscato d’Asti, a light, perfumed sparkling version made primarily in the Piedmontese province of Asti and nearby Alessandria and Cuneo.  Confusing, perhaps, is the formerly-known-as Asti Spumante, which has more bubbles and slightly higher alcohol content and is now known simply as ‘Asti’—just as Aubrey Drake Graham, Degrassi Street actor turned Juno Award winner, is now known by the mononym ‘Drake’.  Not sure why Drake shortened his name, but one of Asti Spumante’s emotional issues was that it was almost universally panned by wine bon vivants, being disparaged (in specific) by Napanese know-it-all and really hot hotshot Karen MacNeil as, “…a poor man’s Champagne.”

Did or didn’t this Left Coast biznachissima just diss ‘poor men’ like we all once were?

Nonetheless, Ms. MacNeil does not win the award for Dick of the Day—an honor I dole out so rarely that frankly, I’ve never done it before.  That is forthwith bestowed upon one Gil Kulers of accessatlanta.com.

‘Dick of the Day’ Automatically Qualifies Mr. Kulers for the ‘Dick of the Year’ Run-Off in December

Gil Kulers, Dick of the Decade

On September 16, 2011, Kulers—a self-styled ‘wine connoisseur’—wrote a column entitled Rappers Ruin Moscato in which he suggested that hip-hop homies have no business falling in love with light, playful, effervescent moscato because they don’t understand the science of wine, and insist on drinking it at all the wrong times during a meal.  A former sommelier, Kulers seems generally incensed that ‘rappers’ and their minions, many of whom are new to wine, would dare enjoy Moscato d’Asti during the ‘non-sweet portion of the meal’, or even worse, inside their limousines, at a nightclub, or basically, at any time not expressly dictated by him.  He shakes his bald, wine-wise head at the folly of ‘celebrating’ with Moscato d’Asti, saying it ‘ranks among my last choices for a celebratory drink.’

Kulers even goes so far as to mock Drake’s lyric, ‘It’s a celebration clap clap bravo; Lobster and shrimp and a glass of moscato.  Let’s finish the whole bottle…’  by pointing out 1) that ‘moscato’ and ‘bottle’ don’t rhyme and 2) that moscato doesn’t go with lobster or shrimp.

Far be it from me to argue with a genuine wine connoisseur and genuine former sommelier like Mr. Dick O’Day, despite his desperate discursion into dastardly dickery.  But frankly, as long as the residual sugar is in check and what’s left behind is balanced by acidity, moscato should pair wonderfully with naturally-sweet lobster, and depending on how it is dressed, with shrimp as well.

Oh, and Your Holiness?  I believe the ‘moscato’ rhyme in the lyric was meant for ‘bravo’, not ‘bottle’.  ‘Bottle’ went with the next line, to rhyme with ‘model’.

You Can’t Get Cooler Than Kulers.  Or Can You?

When it comes to making well-informed decisions as to what, when, where and how to drink wine, Kulers sees his purpose on Earth as saving young people from themselves. Even young people who earn more in a week than O’Day has in his entire wine-wanking career.  And if they don’t hearken to his superior grasp of enological propriety?  If they think that dragging themselves up from degrading poverty and truly awful childhoods (L’il Kim grew up homeless on the streets of Bedford-Stuyvesant after being booted out of her single-parent house) to the very pinnacle of their chosen discipline should afford them both respect and leeway in deciding whether or not to drink Moscato d’Asti with Lobster Thermidor?  Or to pop a cork to toast their fiftieth consecutive Grammy?

Well, according to the Daily Dick from arrogant Atlanta, they’ve ruined the varietal not only for themselves, but for everyone else.

‘You really ought to think about what makes you happy and forget about what other people declare that is good/bad or otherwise about a wine.’

‘Wine is too pretentious…’

‘The world is full of wine lovers and wine writers with a snobbish streak a mile wide.’

‘Read Whoever You Want, But Drink What You Like.’

Here in Detroit, our population has dipped below what it was in 1920. Even the dead people are moving out; in the last decade, over a thousand corpses have been disinterred by surviving kin and moved to safe cemeteries in the crime-free suburbs. Meanwhile, there are 36 square miles of vacant land—roughly the size of San Francisco—and over 12,000 abandoned houses.  With nearly a quarter million Detroiters out of work, you’d think we’d have plenty of time and patience to develop the empty lots, to tear down the ruined houses, and at very least, to deal kindly with hypocrites.

Strangely, Mr. Kulers, on all three counts, we don’t.

3 Responses to Moscatos and Mosquitoes: Summer In The Motor City