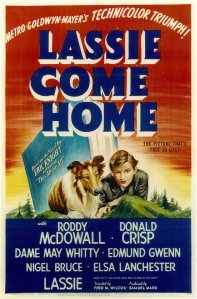 In setting the kibble-strewn stage, Lassie Come Home was a 1943 MGM tearjerker starring Roddy McDowell (as young Joe) and ‘Pal’ (who played Lassie) that ultimately launched the syrupy television series; in the film version, the Yorkshire Carraclough family, having fallen on hard times, are forced to sell Joe’s border collie to some rich Scottish laird, and the rest of the flick involves the dog’s idiotic, utterly-implausible journey from Scotland back to Yorkshire, where Lassie is reunited at the last possible second with poor, forlorn Roddy, who’d by then given up all hope of seeing her again.

As you might suppose, there was not a dry eye in the house, except among litigation attorneys who realized that the dog’s sale had been final and she’d soon be wrenched from Roddy’s trembling arms and returned to Nigel Bruce, Duke of Rudling—the rightful owner.

In the re-telling, I play Lassie, Chris Baldyega of 2 Lads Winery is Joe, and if you can do a passable Highland brogue, you can be the Duke of Rudling.

Thus far, alas, our story does not have a happy ending.

Since having met Lad 1 (Chris Baldyga) at a 2009 wine tasting and threatening him with an interview ever since, thrice have I made the arduous trek from my suburban Detroit dog kennel to the spectacular 2 Lads Winery on the Old Mission Peninsula, crossing mountains and rivers, encountering  evil shepherds, conniving traveling salesmen and kindly old people who sell me beer at gas station convenience stores.  And yet, panting, drooling, tail wagging, every goddamn time I get there, neither Laddie is home. (Lad 2 is Cornel Oliver).

I strongly suspect the script writers.

A Tasting Room Fit For a Duke 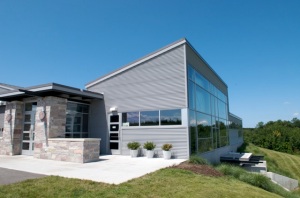 Every time I walk into the 2 Lads state-of-the-art facility—an awesome blend of ultra-contemporary aesthetics and functional, gravity-flow grape-processing practicality—I note that if for no other reason, they need the massive size to contain the elephant in the room:

That is, although Cornel and Chris command the press attention (or would, if I could figure out when the heck they’re coming home), there’s a 3rd Lad with pockets deeper than those in the Duke of Rudling’s kilt.  Arguably the most stunning winery design in Michigan, there likely are not enough border collies in the contiguous United States that you could sell in order to afford this joint.

But, no matter.  It was not the poured concrete bar or the sensational view of the East Bay beyond which drew me North, nor in the end, even a chance to shit-shoot with either of the Lads: It was their wine.

And pouring that early May afternoon was assistant winemaker/wine educator Caryn Chachulski, a woman of vinous charm and substance who can not only carry the torch during the 2 Lads’ AWOLishness, but kick the flame up a notch—which is probably why she sports the additional title of ‘Social Media Marketer’.  Trained at CSU in Fresno, she came aboard the good ship 2 Lads in 2007 after a stints at L. Mawby and can walk a taster through subtleties in the selections that you’d really require extensive process knowledge to acquire.

Here’s what she was offering:

2 Lads Winery, Pinot Grigio, Old Mission, 2010, (about $17):  Of the 22 acres that 2 Lads has in vine, about a quarter is pinot grigio, and as a result, it’s the grape on which Laddish reputations are staked.  Oddly, their two blocks—600 feet apart—have such markedly different terroirs that one is used for still wine; the other for sparkling.  The 2010 still grigio was drier than the vintage it preceded and followed, and predictably, it is shivery with tight acidity underlying honeysuckle on the nose and apricot, citrus and tangerine on the palate.

2 Lads Winery, Sparkling Reserve, Old Mission, 2009, (about $25):  The first, and as far as I can tell, only vintage of this blend (75% chardonnay/25% pinot grigio) is produced via traditional, painstaking méthode champenoise and shows delightful, yeasty brioche notes, with the chardonnay offering bright lemon, apple and a bit of pineapple; the pinot grigio kicks in a little Bosc pear.

2 Lads Winery, Reserve Chardonnay, Old Mission, 2010, (about $ sold out):  Harder to find than a Lad, so I report on it further only because the irony of sampling a wine you can’t buy is identical to writing about winemakers you can’t interview.  French oak fermentation and seven months on the lees lent the wine vanilla cream and sweet butter; pleasant, fruity and nicely complex, with lemon zest, fig and Granny Smith apple.  I’d tell you what clones they use, but you probably can’t find those either.

2 Lads Winery, Cabernet Franc Rosé, Old Mission, 2011, (about $19):  2011 may be the Northern Michigan vintage that ultimately raises the bar for cabernet franc; being a big fan of dry, Cabernet d’Anjou-style rosé, I don’t have the slightest issue with the Lads sinking a good portion of the harvest into just that.  The wine has as much punch as plenty of cool climate pinot noirs, with such springtime flavors as instantly recall those of Loire’s versions: Rhubarb, strawberry and raspberry followed by a distinct and succulent whiff of grenadine.

2 Lads Winery, Cabernet Franc/Merlot, Old Mission, 2010, (about $25):  The sensationally warm season brought both the cab franc and merlot (45% of the blend) to full ripeness; as a result, the wine boasts opulence and breeding with rich ripe cherry, Damson plum and licorice—and none of the weedy pitch of pepper that may show up in this blend during chilly seasons.  Bold and self-confident, the wine finishes with a long, silken sigh.

Speaking of long, silken sighs, while I sit at my lonely keyboard and wait to see if either Laddie Comes Home, or if this column draggles a sound bite from at least one of the Lads (which I’ll then promptly add), I shall fill up the remaining space with some trivia regarding Lassie Come Home which may not help you in your quest for Old Mission Peninsula wine appreciation, but may net you a winning berth on Jeopardy: