Zima, Why Can’t I Quit You?

I have a friend called Cori who recently asked me for some bourbon advice because she planned to give her boyfriend a fifth of small batch for his birthday, and although she’d already found the liquor, she was iffy on giving him a pewter hip flask to pour it into.  In posing to me the question of whether or not a pewter hip-flask was sufficiently macho, she referred to me as seeming like a ‘man’s man’.

Now, if the truth is told—even though Elton John, Clay Aiken, Neil Patrick Harris and Ricky Martin are all clearly men’s men—other than being told, ‘Gosh, honey—are you ever handy with that reciprocating saw,’ being called a man’s man is a consummation devoutly to be wished.

And thus, we all aspire to it.

Personally,  I don’t smoke Le Bijou Churchill cigars, I douse them in a pewter hip-flask’s worth of Ass Reaper Hot Sauce and eat them.  I swim naked in Lake Michigan in December, even when sober.  I hunt wild Barbary boars with nothing but a butter knife and I run marathons with a Yugo strapped to my back.  I read my teenage daughter’s diary.

And frankly, hon, screw the power tools.  Real men believe that only a wuss would use a reciprocating saw when the same job can be accomplished with the fingernails.

Add to that the fact that bourbon is indeed my chug of choice, and in my own mind, my man’s man status is confirmed.

Repression: One of the Most Haunting Concepts in Psychology

In fact, repression is the foundation upon which clinical analysis rests—I know, because I studied it at college for many years before I realized that I had accidentally checked ‘psychotherapist’ instead of ‘alcoholic vagrant’ on the back of the career-day matchbook.

I recall (without needing therapy) a landmark case that was presented in one of the few classes where I actually paid attention:

In Redwood City, California, a middle-aged dude named George Franklin was convicted of murder twenty years after the crime based solely on the re-emergence of childhood memories in the mind of his now-adult daughter Eileen.  Her flashbacks apparently impressed not only her shrink, but also the San Mateo district attorney and a jury of Franklin’s peers, because he was convicted of 1st degree murder in less than twenty-four hours.

Thanksgiving with the Franklins!

Unfortunately, the whole thing wound up being bullshit, and after six years, Franklin’s conviction was overturned and he was released.

Bet Thanksgiving dinners in that family are a riot, huh?

Repression: One of the Silliest Concepts in Psychology

I use that anecdote merely to reference a personal memory that unsuppressed itself shortly after Cori’s kind and perfectly accurate assessment of my testosterony character:

In my mind’s eye, out of the blue, I saw myself cutting the grass in 1994—not with my teeth, either, but astride a chartreuse-green and canary-yellow rider mower.

And it gets worse.  Inside the mower’s cupholder (an asinine but requisite accessory for those of us who at least minored in alcoholism) was not a beer, not a manly tumbler of single malt scotch, not even a borderline-prissy Jack-and-Coke.

It was a douchey, lemon-lime flavored Zima.

Bet You Didn’t Know That Bulgarian Winters Were Made For Girly-Men, Did You? 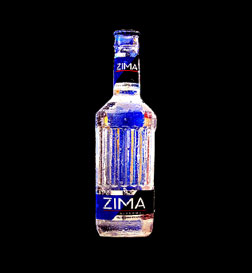 Back in the ‘90s, when no self-respecting male would drink a wine cooler, somebody at Coors Brewing Company had the genius notion of marketing to us a clear malt beverage instead.  Had they referred to it as an ‘alcopop’ as they might in 21st century nomenclature, we wouldn’t have touched it with a ten-foot pole; instead, they called it a ‘beer alternative’ or (absurdly) a ‘malternate’, and suddenly, according to statistics, fully half of male American drinkers decided that they needed to try a ‘malternate’ at least once.

The fact that Coors named it ‘Zima’ didn’t hurt, either: Zima is a Slavic word meaning ‘winter’, and you don’t get much more butch than January in Belorussia, do you?

Allowing myself to further circumnutate the soot and cinders of my severely dissociative mind, searching for other cases of ego-abuse so egregious that I probably padlocked them inside some inaccessible mental crawlspace, I came up with many Zima-related memories—including me jettisoning empty after empty into a wooded area on my property.

See, that’s it.  Game, set, match.  The whole idea instantly becomes nuts:  Me, Mr. Earth-First Greenpeace Save-The-Whales-But-Carpet-Bomb-Monsanto-Headquarters, polluting the planet I will leave my bratty, misbehaving and dress-like-alcoholic-vagrants children, throwing returnable, non-biodegradable bottles into the woods where I might easily hit an endangered species of squirrel, simply because I—who might climb the daunting Slavic peak Hora Hoverla mid-winter, dressed in skivvies—was too lazy to walk to the house… (??!)

These so-called ‘memories’ are merely manifestations of my terror, rage, guilt, depression and overall behavioral dysfunction based on my awareness that Zima was ever foisted upon us men’s men Y chromosome carriers.

So, just to be sure, I went out back and gamely dug through the area where I ‘remembered’ having thrown Zima bottles, braving poison ivy, spider webs and icky, slimy gastropods like the badass stud that I am.

And now, damn it all, after I’m done with repressed memory therapy, I have to start in on this sudden outbreak of hallucinations.

Back To the Zima Story

In his paper entitled The Long, Slow, Torturous Death of Zima delivered before the 99th Annual Convention of the American Psychological Association in San Francisco, Brendan Koerner confirmed what most of us had already suspected:

Zima’s popularity peaked in 1994, when 1.3 million barrels were sold, but constant mockery by the gap-toothed, late night television yuckster finally awoke those of you metrosexuals who actually did drink Zima while mowing the lawn that after your Bottega Veneta man purse, your hair highlights, your electrolysis and your nuclear tan, no further emasculation was necessary.

Shortly thereafter, Zima stock began to plummet as precipitously as Letterman’s Nielsen ratings, and a mere two years later, sales were down by two thirds.  Domestic production of the effete sugar water—which is actually made by filtering cheap beer through charcoal, then adding fake citrus flavor and corn syrup—ended in 2008.

Today, Zima is Produced, Marketed and Sipped Only in Effeminate Japan

See, Prime Minister Noda; there’s something else we suspected all along:  In the end, all that Banzai! and kamikaze and fight-to-the-last-man-in-the-rathole crap was about as phony as Eileen Franklin’s repressed memory, wasn’t it?

Thanks again, Cori.  This Bud Light Lime-A-Rita’s for you.

This entry was posted in BEER and tagged David Letterman, Zima. Bookmark the permalink.