How To Buy Wine In The Most Dangerous City In America

“How ya gonna keep ‘em down in the slum,

I won’t say the name of the Flint lounge where I had this conversation, because the bartender has been there twenty years and probably shouldn’t be talking about her customers in a manner that results in being publicly quoted.  But what she said tickled the bleep out of me:

“Back in the day, he used to come in all frowzy and stuff, in sweats and a ball cap, just like a normal guy.  Last time he was in, he had a bunch of handlers with him.  He was dressed in slick clothes and was all tan and had his hair brushed and everything.”

See, this amused me, because I thought Michael Moore cultivated his Moonbat McWacky public scruffball image as carefully as Alfalfa did his phallic, pomade-soused cowlick.  Which I think he did, until Laurent D. of Privé Salons in Beverly Hills got a hold of him and finagled a makeover that included highlights and lowlights for the vaguely spiky do he sported at the People’s Choice Awards.

Can you make a silk purse from a sow’s ear?  Likely not, which is why Mr. Laurent had to use the whole sow.

Okay, That Was Mean…

Michael Moore is one of those people about whom one’s opinion is unilateral, with no middle ground, no equivocating and absolutely no waffling—the latter in fear that Moore might grab your waffle and devour it before you could pop him with a Nugent-approved assault rifle.

Michael Moore you either love or hate, but not both—correct?

Not:  And I’m Living Proof

“We shall see thee no Moore.”

See, I wrote a bunch of stuff for Moore when he was editor of Michigan Voice, and he complained about, snickered at, rewrote or rejected every damn one of them.  Frankly (ever the vindictive one), I did an ebullient Irish Sean-nós stepdance when I learned that Moore’s tenure at Mother Jones (for which he abandoned Flint a heck of a lot quicker than Roger Smith did) was only four months long, and that he’d been shit-canned for doing unto others as he’d done unto me.

That’s the hate part—at least half of it.

The other part is self-hate: I hate myself for loving his films, every last one of them.  And that’s the love part.

Alright; so, I’m a messed up bundle of cognitive, intervention-worthy contradictions; at least I appreciate a good joke:

Guy goes into a bar and sees another guy trying to light his Bic with a match.  “Are you out of flint?” he asks.  “Nope,” replies the second guy.  “Hamtramck”.

Moore was right about one thing: In the wake of GM’s wake, Flint has really let itself go.  Currently, the average household income is under $30,000—46% below the national average.  Flint’s poverty rate is 36.2%, making New Orleans (at 21%) seem like Monte Carlo during high-roller tourist season. The city’s 2013 budget includes higher taxes, apparently meant to fund comprehensive cuts to every single municipal department including police and fire; part of the wit and wisdom of Emergency Financial Manager Michael Brown.

To gild this particular lily, last year in commemoration of 22 instances of violent crime per 1,000 residents—including 53 murders and 1,500 aggravated assaults—Flint was named ‘America’s Most Dangerous City’ by numerous publications including The Wall Street Journal and Huffington Post.

It’s enough to drive a fella to drink, so it sure would be nice to have a place to do it.

Flint: Between a Rock and a Hard Place

Other than the seedy, erstwhile factory-rat bar where I had the Moore conversation, Flint is really remarkable as being one of the very few American cities of more than 100,000 residents that has no restaurants.  I mean, literally, none.

I’m not talking about chains like Fuddruckers or coney joints where the kitchen staff curses at one other in some bizarre Balkan dialect or anywhere that has the word ‘Family’ tacked onto the name and actually advertises their goulash instead of trying to sneak it past you—I mean decent, ambitious places where they have a chef instead of a cook and you pay at the table, not at the cash register on the way out. 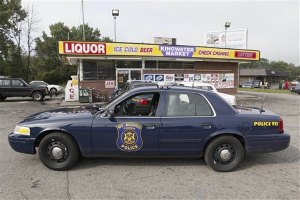 What they do have is a plethora of package liquor outlets—‘party stores’ in Midwest parlance.  The city of Flint alone has sixty (eighteen more  than authorized by the state) and if you can get past the folding iron bars, wade through the pork rinds, cheese-flavored carbohydrates, Keebler Sugar Wafers and Rolling Rock displays, you’ll find that most actually stock a few dusty bottles of ‘stuff in which the word wine appears somewhere on the label’.  And if you don’t mind waiting twenty minutes in a line in which nearly everyone else is buying Daily 3 and 4 tickets and half-gallons of Black Velvet while clutching bridge cards and diapered, dysgenic kids, and then dealing with a clerk who is still bleary from his/her nightly ten-minutes-to-two-until-two AM rush, you’ll find that you can actually pay for one.

What it is that you’re paying for is a different story.

Therefore, in my never-ending anti-journalist’s crusade to bring useful, hard-hitting information to shut-in drunks, I made the personal pilgrimage to Flint, risking life, limb and liver disease to uncover just what that may be.

The following compendium of crapola is not meant to be comprehensive; these are merely the liquor stores I hit before becoming overwhelmed with the need to do some personal ‘celebrity spotting’ like that silly drink jockey and her braggadocio Michael Moore story.

Now, realistically, this is Dort Highway, not Wilshire Boulevard or Fifth Avenue, and I knew I had a better chance of spotting Dudley Moore than I did Michael Moore, who’s now become far too Ulmer Scale A-List to hang out in Flint more than once in a coon’s age—if it was him I wanted to ‘encounter’, I’d head up to Torch Lake in Northern Michigan, where the ‘Voice of the Occupy Movement’—who encourages we militant 99% to continue our good fight against the wealthy—has his two million dollar lakefront luxury mansion.

But who’s to say I couldn’t find some Moores who were neither dead nor bankable nor in current Tinseltown demand—which for them may all be the same thing?

How about Demi?  Or Roger?  Or Melba?

I’ll report in on that when I feel like it. In the meantime, here’s where you can buy wine in the most dangerous city in America:

The Biblical proportions of this smart, well-appointed junk foodery may be lost upon the staff, but not upon Judaic scholars who know, of course, that ‘Zerka’ is the Hebrew term for the River Jordan.  Yet there is no Jordan Cabernet to be found amid the Ding Dongs and Ho Hos, nor even any sacramental Manischewitz, although Lisa the Cashier—whose elegant ensemble and simple hairstyle evoked the ‘Old Hollywood’ of Hedy Lamar or Jean Harlow—recommended Barefoot Moscato, her personal favorite, or, if I wanted something with a little more ‘oomph’, Seagram’s Sweet Tea Flavored Vodka.  Which is technically not wine, but like I’m going to give Hedy Lamar enology lessons?

Any place that so unabashedly caters to extremely cheap people bent on self-destructive habits is at the tippy-top of my personal Ulmer Scale; this boutique—mere yards from Zerka’s—shows that the Flint zoning and planning coordinators have testicles of titanium when dealing out SDD Off-Premise licenses.  I asked the salesperson—looking stunning in her coral, strapless (Louis Vuitton?) poly-cotton smock, by the way—for a wine recommendation, and she asked if I’d ever heard of Sutter Home.

Obviously I walked in with sommelier/wine writer written all over my Salvation Army AKOO hoodie.

In the boondocks of suburban Flint, the Last Chance is helmed by a tan, t-shirted, gnarly old dude who keeps tabs on area shootings, reporting two the night before I stopped in, one per day on average in Flint, including three party store owners over the past few years.  No word on whether the crimes were precipitated by frustrated connoisseurs who will find several brands of charcoal on the Last Chance shelves, multiple kinds of Copenhagen and Red Seal tobacco, dozens of colon-canceraries like Twinkies, Doritos, Kit Kats and True Moo Chocolate Milk, but only a single wine label: Gallo Family Vineyards.  This screams ‘Mafia bootleg infiltration’ to me, but what do I know?  I opted for the sauvignon blanc because it looked less brown and contained more alcohol per volume than its sister varietals pinot grigio and ‘Sweet Chardonnay’ and found it to be predictably and generically gluggable. 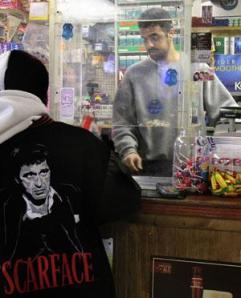 “Give me a pack of Swisher Sweets, a Mega Millions ticket and something I can use to blow up airplanes.”

Here on the non-Caucasian side of town, you can do some serious bargain hunting—provided your thing is Magnum Malt Liquor (two 40-ouncers for three dollars), Tilt Premium (containing 12% alcohol along with caffeine, ginseng and Guarana; ideal for the health/trend-conscious derelict) or methamphetamine (there’s a ice cream truck stationed permanently out front which I guarantee is selling more than Good Humor Jimmy Cones).  It’s strictly self-serve, of course, since all transactions are done through Armormax thermoplastic so thick that advice solicitation is impossible.

Now, I’m not as big on conspiracy theories as, say, Michael Moore is, but something rotten is clearly at work here:  The Corner Stop’s fine wine selection is limited to the effeminate kaleidoscope of MD 2020 flavors like Banana Red and Kiwi Lemon, wine coolers and girly Riunite labels like Lambrusco and Lancellota, and for a few pennies more, a genuine imported stocking-stuffer: Opera Prima Sparkling Pink Moscato from Tierra de Castilla, Spain.  Isn’t it obvious that there is some sort of methodical eunuchization being imposed upon Flint’s wino community?  Possibly part of a massive government eugenics plot to ensure that undesirables like unemployed ghetto drunks are so wussified that they cannot reproduce??

Come on, Mike: Flint, bad guys in Washington, oppressed masses being systematically sterilized via the one product they can’t live without, cheap booze?

This one has your name written all over it.