Posted on November 4, 2015 by intoxreport

That, of course, makes Domaine du Pegau the most exclusive jug wine in the world.

As for pronunciation, DdP may also be the most mispronounced wine name in the world: Even Pegau winemakers Paul Féraud and his daughter Laurence disagree. The original word has an umlaut (in French, a tréma) over the ‘u’, making it Peh-GOW; Domaine de Pegau uses no tréma, making it ‘Pay-GO.

Regardless of pronunciation, the Féraud family has been making wine in the lauded commune of Châteauneuf-du-Pape in Southern Rhône since 1670.

Although the Domaine itself was not officially named until 1987, Laurence Féraud confirmed that the Pegau style originated many centuries ago: 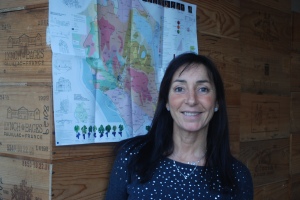 “We have always made powerful wines with elegance and sophistication. We look for complexity both in the grapes and their treatment, and we achieve this by choosing the correct soils for our varietals and the barriques in which we age them. Wine in a barrel is like money in the bank, always earning interest.”

Laurence credits her palate to nature as much as nurture, believing that taste is a genetic inclination. Indeed, with a pedigree that reaches back centuries, it is hard to disagree. Still, her personal wine resumé began early: She tells tales of being assigned to check the wine level in foudres (600 liter barrels) when she was five.

“My grandmother Elvira was the winemaker—my grandfather was more of an intellectual; he tended the vineyards, along with my father when he became old enough. In 1964, the family decided to bottle 2000 annually under the name Domaine Féraud while the rest went into foudres and was sold to merchants.”

Then as now, the Férauds grow primarily Grenache, Syrah and Mourvedre, among the the eighteen grapes permitted Châteauneuf-du-Pape, including a few white varieties.

Laurence points out that her only biodynamically certified vineyard plot grows only white grapes. 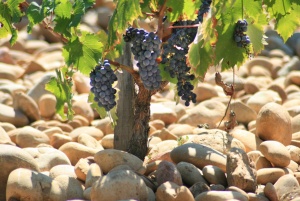 As a winemaker, Laurence Féraud favors the rich licorice qualities her fruit exudes, based in part on the red clay soils that make up the terroir.  Various other soils, including the famous galets roulés stone, impart notes of white pepper, the herbal quality known as garrigue and a nice undertone of leather and roasted meat.

These are qualities which has seen Domaine du Pegau ranked among the top three labels in the appellation since its inception.  These days, Laurence Féraud is passing along family traditions to her son Maxim, insuring that it will remain a force in CdP for yet another generation.

Château Pegau Côtes du Rhône Blanc, ‘Cuvée Lône’, 2014 ($18):  Leesy and floral, with a sight touch of oxidation; the wine shows more mineral than fruit, although there is some latent peach notes on the amazingly long palate. 40% Clairette, 30% Bourboulenc, 20% Grenache Blanc and 10% Ugni Blanc, for the blend-curious.

Domaine du Pegau Châteauneuf-du-Pape Blanc, 2014 ($42 ): A better selection for fruit lovers, this wine is a juicy—albeit pricey—tropical paradise, with a flamboyant nose of pineapple, mango and ripe pear.  The blend here is weighed heavily in favor of Grenache Blanc and produces a deep, refreshing package with lovely, fresh aromatics and bracing acidity.

Château Pegau Côtes du Rhône Rouge, ‘Cuvée Maclura’, 2012 ($18):  The concentrated raspberry quality of this wine, made primarily from Grenache, is so intense that I was prepared to pick seeds out of my teeth after a sip.  Cassis comes into play as well, and a firm tannic undertow that lingers on the palate with a slight bitterness.  According to Laurence, since this wine is aged in vats, the tannins are primarily from the stems and seeds with which the grapes were macerated for ten days.  A beautifully luscious Côtes du Rhône.

Château Pegau Côtes du Rhône Villages, ‘Cuvée Setier’, 2012 ($25):  The fruit notes are darker here, with mulberry and black currant predominant.  This is the somewhat wilder cousin to the Maclura, heavier, fiercer, with pepper tones and untamed tannins.  Needs some time to mellow, but provides a lurid glimpse into what Villages level in this AOC can do. 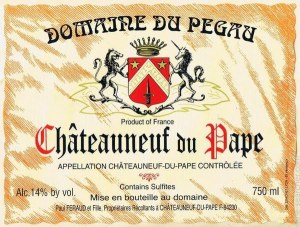 Domaine du Pegau Châteauneuf-du-Pape, ‘Cuvée Réservée, 2012 ($79):  A blockbuster, with layers of varietal flavors that seem to isolate themselves before blending together in a massive, earthy mouthful that suggests a judicious dose of brett.  A spicy pepper bite behind roasted meat, barnyard straw, black cherry and tight tannin backbone.

Domaine du Pegau Châteauneuf-du-Pape, ‘Cuvée Laurence’, 2011 ($79):  More to my personal tastes, this wine maintains the huge and brightly acidic profile both in aroma and palate, but the earthy tones are now established outside the barn, with mushroom and wild herbs shoring up sweet red fruit and the elusive licorice flavor that is the pride of Laurence Féraud.

This entry was posted in FRANCE, Rhône and tagged DIY. Bookmark the permalink.