Posted on November 9, 2015 by intoxreport 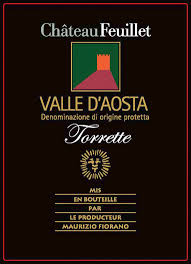 I have spontaneous respect for wineries who export wines when they don’t have to; when they develop an international fan base when it makes no business because they simply produce too little wine for this to be a strategy with dividends.

They’re like little Evel Knievals without any rationale beyond their battle cry:  “Look at me and see what I can do!”

That’s my impression of Château Fueillet of Torrette—a tiny domaine in a tiny town just outside tiny Valle d’Aosta, a scarcely-discussed DOC wedged so far into northwest Italy that if you go any farther north you’re in southwest Switzerland.

If Fences Make Good Neighbors, What Do Alps Make?

Aosta exists in a triad of wine traditions reflecting its relationship with both France and Switzerland.  The output, however, is almost ludicrously small—wine pro Todd Abrams points out that Barefoot Cellars sells more wine in a year than the entire region combined, while the Valle d’Aosta DOC itself produces only 36,000 cases annually, making it similar in output to a single top estate in Bordeaux.

What they make is fascinating, though. Despite vineyards at average elevations higher than nearly anywhere in Europe, the climate is remarkably hot and dry, leading to extended hang times and harvests that may extend beyond October. Again, contrast this to Barefootlandia, where nearly all the grapes are in long before fall has even begun.

The indigenous grapes in Valle d’Aosta are part of a whirring cosmos of unfamiliarity as well.  Their imports we know—Gamay, Nebbiolo, Malvasia—but the home team is the one I find most seductive. 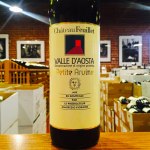 First,  Château Fueillet Petite Arvine, 2014 ($31).  A late harvest grape, Petite Arvine is well suited to the long, dry climate of d’Aosta. It tends to be low-acid, but the diurnal shifts here are so extreme that what acids exist remain throughout the ripening cycle. Sugars and flavors concentrate, and the result is a rich, balanced nectar that suggests all sorts of apple incarnations, from slightly oxidized core to Jolly Rancher candy.  Behind that is an array of flower tones and an underscore of crushed stone minerality.

Château Fueillet Fumin, 2014 ($35) contains 10% Syrah, but showcases Fumin—a red grape native of Aosta and, as far as I know, grown nowhere else. If this wine is representative of Fumin’s profile, the  obscurity is a shame: It’s bright with sweet red berries, the pleasant side of jammy. The tannins here are equally ripe, and are predominately of the sort you associate with grapes allowed to remain on the vine for as long after véraison as possible, equaling big velvet potency in the mouth. The wine also employs a few technical sleights of hand: Maceration may last 20 days, and after nine months in barriques, the wine returns to stainless steel tanks for a settling period before bottling and is not released until eighteen months from harvest. 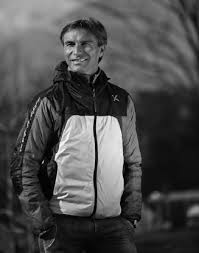 The winemaker responsible for these gems is Maurizio Fiorano, a surveyor turned enologo when he began to cultivate the five thousand square meters his wife inherited. As mentioned earlier in this piece, when we are talking small in Valle d’Aosta, we mean it: Since 1998 he has increased his vineyards nearly tenfold, yet still speaks of them in terms of square meters rather than hectares or acres.  And when he showed up at the mammoth VinItaly expo to show off his first vintage, he only brought along four bottles.

Despite doing small, Fiorano thinks big: A global marketplace is not necessarily on his bucket list, but a wish for global recognition is sloshing over the sides.  And, having discovered his wines in an equally tiny wine store (like a treasure in a curiosity shop) I can confirm that the bucket on Maurizio Fiorano’s list is filled with some remarkably stalwart juice.