A:  I know you thought that was a lead-in to a punch line, but the fact is, pilots are forbidden to fly within six hours of taking a boner bolus because it may affect their ability to recognize certain colors, important for seeing runway lights and instrument panel identifications.  Also, it may cause them to grab for the wrong joystick.  (There’s your punchline).

So the other day, when a wine compatriot poured a glass of white wine and said, “Try this Beaujolais,” I naturally assumed that at breakfast I had accidentally grabbed for the little blue pills instead of the Methaqualone.

But now he tells me that, like albino blues players, blonde gorillas and white guys named Jamal, Beaujolais Blanc is a real thing.  Whether or not it’s is a real good thing may be a matter of opinion, recalling that there are people who actually bought Pat Boone’s heavy metal album.

I think we all know where we were and what we were doing the moment we learned that Alpha Negress Rachel Dolezal was actually a crackerhonky Swede from Montana; I think we also have WTF? scars on our brain stems from learning that Bruno Mars is not black, but Carol Channing is.

So, I will recall until the sound of my own eulogy echoes through the halls of the debtor prison that on Saturday, June 27, at 3:15 PM, at Elie Boudt’s wine store in Birmingham,  I learned not only that Beaujolais makes white wine, but that it is, in ways, even more stringently regulated than the famous reds.

First, Beaujolais is a French appellation just south of Burgundy which, in excellent vintages, may out produce neighboring Côte d’Or, Côte Chalonnaise and Mâconnais combined.  That’s in part because Gamay—the grape that is both Beaujolais’ workhorse and her show pony—produces fruit in abundance while Pinot noir, the red wine grape that defines Burgundy, does not.

You can thank Duke Philippe the Bold for this state of affairs; in 1395, he outlawed the cultivation of Gamay in Burgundy, which he regarded as ‘disloyal’.

99% of the wine produced in Beaujolais is red, and there’s a lot of it: Last year, the AOC produced a bottle of wine for every man, woman and child on the East Coast of the United States.  But although it is predominately made from Gamay, the appellation law allows the blending in of several white grapes, including the forgettable Melon de Bourgogne (bland outside Muscadet) and Aligoté, which tends to improve when blended with crème de cassis, not Brouilly.

Yet Beaujolais Blanc—making up less than 1% of the appellation’s wine (there’s also a rosé) is legally mandated to be a product of Chardonnay alone.  It seems curious that an afterthought wine is offered no leeway in varietal choice, but since the limestone soils of Northern Beaujolais make it a continuation of the Mâconnais, if vignerons  are to achieve any notoriety with their whites, they understandably need to work with the best of what they’ve got.  And like the wines of Mâcon—Pouilly-Fuissé and Saint-Véran are among them—that’s Chardonnay. 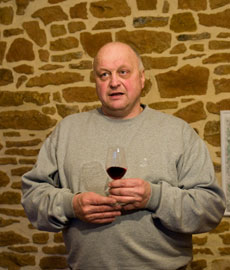 The wine poured was Terres Doreés from Charnay, a village just north of Lyons known as ‘Land of the Golden Stones’. Owner/winemaker Jean Paul Brun farms 45 acres of vines on limestone, fifteen of which are in Southern Beaujolais surrounded by Côte de Brouilly, Morgon, Moulin a Vent and Fleurie, all of which sit on granitic soils.

Brun says, “I started Terres Dorées in 1979 with 4 hectares of vines; we’re currently at about 30 hectares. The first wine we ever made was our Beaujolais Blanc from Chardonnay and today, 8 hectares are dedicated to it.”

The 2013 Beaujolais Blanc opened with a whiff of pineapple and slight overtones sulphur; the nose expanded to encompass honeydew melon and peach.  Whereas the bouquet suggested nothing but unoaked chardonnay, the palate became a bit more exotic and layered, offering scents of creamy apple compote and a distinct grapefruit finish.

The wine was competent, refreshing, interesting, but by no means a Cru-level wine.

Still, the chance to try it was a chance to read up on Jean Paul Brun, an iconoclast in Beaujolais, who foregoes traditional whole cluster, semi-carbonic wines and opt for a more Burgundian style suitable for aging.  Unlike other winemakers of the area, who make wines to be released early and consumed young, Brun prefers to give his wines at least a year and half of cellar time to soften the tannins.

When asked if his unique approach posed any problems with the AOC, in particular because of his refusal to work with legally-mandated whole clusters, he replied, “Well, I’m not in jail yet.”

Good one, Jean Paul!  Last we checked, neither is Rachel Dolezal.