A spitball’s throw away from the hallowed estates of Vosne-Romanée lies the somewhat less hallowed estates of Nuits-St-George, but the difference in prestige (and price) may be comparable to Prince Fielder’s salary in 2015 and Jackie Robinson’s in 1957.

Both communes are in the southern part of Burgundy’s Côte de Nuits; both specialize in Pinot Noir and each is known for a wine quality—at varying levels of explicable description—referred to as ‘elegance’.  But we’ll get to that.  First, it is interesting to note how abruptly the lyrical gleanings of Burgundy can vary with the neighborhood, due primarily to specific terroir, which in turn is due primarily to an amazing tessellation of soils, much of it formed when Pangaea was tout le monde and you could essentially canoe from Beaune to Boston.  This quick change of geological substructure—often referred to as sous-sols—keep the parcels of real estate in Burgundy small, and the most expensive on earth.

For example, a prime acre of Napa (sans houses, etc.) may push half a million dollars and in Bordeaux, an acre may nudge a million.  But the celebrated grand cru vineyards of Burgundy average more than $2 million per acre, and a few small vineyard parcels have sold for up to $16 million.  To evaluate worth in the most prestigious crus, a solicitor may actually count individual vines and multiply; $3,000 per vine, for example, times 4000 vines per acre.

One reason for such exclusive pricing is that the output from Burgundy is concentrated into the smallest amount of property.  Of the 1.2 billion gallons of wine the French produce per years, less than 5% is Burgundian.  Bordeaux produces twice as much wine as Burgundy; Languedoc-Roussillon makes six times more.  Even the Loire outpaces both the Burgundy and Beaujolais appellations combined—71 million gallons to 61 million gallons.

wine-searcher.com recently released a list of the ten priciest wines in the world, and to no great surprise, eight were French.  And of those eight, seven were from Burgundy. 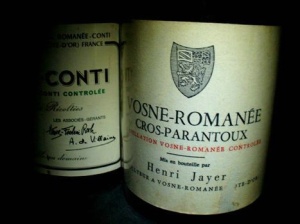 Thus rounding the bases and returning to the opening pitch of this piece:  Vosne-Romanée and Nuit-St. George and the rather striking difference in price.

Travel time between the two communes?  Four minutes.  So the question becomes, would you drive a mile to save seven thousand five hundred dollar?

Careful with those apostrophes, chillens:  With them, the Odouls, a Morey-St-Denis family of vignerons, are nothing more than the bevvie-of-choice at an Alcoholics Anonymous meeting in Hoboken.

Sébastien Odoul is the third generation of winemaker to work the red silts and limestone-rich rendzinas of the Côte de Nuit; with his father Thierry, from whom he took the râteau in 2009, he works twenty acres, including two grand cru vineyards and four première crus. Aux St. Jacques is in the Vosnoise zone, just below Vosne-Romanée, and although it does not show  the breeding of its neighbor to the north, it clearly reflects an image of her glory.  The wine opens with a floral flash and a funneled concentration of succulent dark cherries and strawberry; there’s light spice in the foreground with chocolate cordials and a rich, fruit-driven mid-palate flanked with gentle, elegant tannins.

So there’s the ‘e’ word; elegant.  It seems like a cop-out descriptor, like a designated-hitter rule for the English language, where some random, positionless word can fill in for a regular player too weak to get on base.

But like ‘pornography’, even if you can’t define elegance, you certainly recognize it when you see it.

Elegance is all the same flavors possessed by less-elegant wine packages, but more subdued and imbued with almost—but not quite—impenetrable subtlety.  It’s the ‘not quite’ that puts our eno-lexicon to the test; as writers, we attempt to bring this sprezzatura—a word from the Italian Renaissance encompassing the art of nonchalance, the studied ease of projecting power without the need to overstate—into manageable wine words.  Wines of Nuits-St-Georges in general, and this wine in particular, so near (yet so far) to a consecrated Burgundian zip code display the hemlines of grandeur, the silhouettes of Romanée renown. That’s wine elegance: Almost a Malaysian shadow play where articulated figures are held against a translucent background; all the contours visible and you can enjoy the story without perceiving all the details.

There’s a certain elegance to America’s Pastime as well; a sprezzatura of loaded bases—restrained pacing, a show of ease in difficult actions hiding the conscious effort that goes into them.  And if you want ‘defensive irony’, watch the graceful, but crucial pas de deux between catcher and pitcher as they set tone and control the game behind a mask of apparent reticence and casual-appearing indifference.

Of Odoul’s; but the red stuff, naturally.

1 Response to Nuits-St-Georges Aux St. Jacques: Odoul’s With An ABV