Château Palmer: Margaux Your Own Way

If you find the Bordeaux Classification of 1855 irrelevant, confusing, frustrating or all the above, rest assured: You are in good company.

The snit of owner Baron Philippe de Rothschild over Mouton’s second-rate status led to decades of lobbying, resulting in the only change of note to the original listing: In 1973, Château Mouton Rothschild was elevated to premier cru.

When it comes to Château Palmer, a troisièmes cru vineyard in the Margaux appellation, you will note that no bronze medal is displayed on the label, not even a whisper of the Les Grands Crus classés designation. I’m not party to Palmer label decisions, of course, but part of the pique may be the fact that the only other Margaux with which most wine drinkers are familiar—Château Margaux—has been lording their gold medal in the classification sweepstakes for a hundred sixty years. 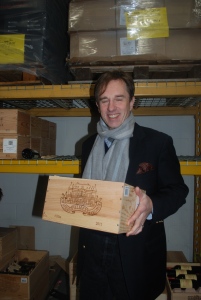 Jean-Louis Carbonnier blinked at the moment of exposure. His eyes are a lovely shade of blue.

“We’re a unique estate in our approach to marketing, perhaps,” admits Château Palmer, director of the brand in the United States.  “Our new generation of winemaking is leaning toward biodynamics, and our push is toward reminding American consumers, who have come to love Cabernet Sauvignon and Merlot blends, where that blend originates.”

This answered one question I had when I said down to a Palmer vertical tasting last week:  Why would a winery that makes around ten thousand cases per year—on the small end of boutique, which can sell its entire production in a tasting room—need a brand ambassador in Manhattan, let alone decide to dispatch one to Detroit to push product.  It would be the equivalent of Rosenblum Cellars opening an office in the 6th arrondissement and sending someone to Normandy to sell old-vine Zin.

Palmer does, to her credit, command several hundred dollars a bottle, and produces a second, less expensive label (not a ‘second wine’; often denoting a lesser quality along with the price—Palmer has separate vineyards for a wine with a distinct philosophy) but more on that in a moment.

Foremost, Carbonnier sees his role as one of an educator, and the promotion goes along for the ride: As one of the most respected names in the Médoc, his mission is to remind you and me that a wine can enjoy a noble heritage and still look to the future through the lens of innovation.

Palmer has been around nearly since the outset, having been part of the ancient Château d’Issan estate, divided in 1748 with the hectares now called Palmer, then among vineyards held by the Gascq family. These wines, no longer attached to the noble name d’Issan, were of such remarkable quality that they became staples in court of Versailles under Louis XV. Even so, financial troubles plagued the estate nearly from the beginning; in 1814, the widow of the last Gascq heir sold the property to English socialite Charles Palmer, who had retired from the military to invest in land. His TLC raised the reputation of the château considerably, and by 1830, Palmer was spoken of with the same reverence as Châteaux Margaux and Beychevelle.  But Palmer also had money troubles, and in 1843, he sold the estate for centimes on the franc.  Another ownership happened in 1853, two years before the famed (or infamous, depending) 1855 Exposition Universelle de Paris, when industry brokers ranked the wines according to reputation and trading price, then a direct reflection on quality. At the time, Palmer vineyards were in the throes of a outbreak of powdery mildew, a fungal disease that severely compromises a vine’s output. Thus, the classification could not have come at a worse time for the estate, and may have been the cause of Palmer’s relegation to third class status, while Château Margaux was pretty much handed the keys to the kingdom.

In any case, fast forward through the first half of the 20th century, a a big war and a big Depression and several more hands in the Palmer pie. In 1938, the château was sold to a syndicate of  the Sichel, Ginestet, Mialhe and Mähler-Besse families, who formed the Société Civile de Château Palmer—a name which does appear on the label. In 2004, management of the estate was undertaken by Tenuta Dell’Ornellaia’s winemaker Thomas Duroux, and this brings us to the second half of the Palmer equation: Innovation.

Under the directorship of Duroux—34 years old when he took over—the holding began a gentle but inexorable stroll into the new century. Fearful of the old scourge of powdery mildew, the estate had been reluctant to leap into organic farming, but Duroux has not only seen the vineyards go organic, they are now 100% biodynamic. So far so good.

Duroux insists that his duty is one of a caretaker, and sees biodynamics as a philosophy as strongly rooted in preserving the health of the legendary soils—Palmer’s 130 acres boast 16 unique types—as in appealing to the consumer’s growing allegiance to green farming. 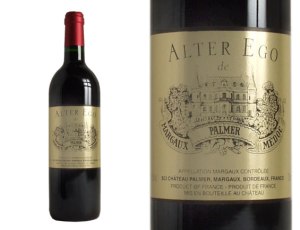 The decision to drop the ‘La Réserve de Général’ line, which until the ‘90s was wine made from cuvee not selected for use in the Grand vin, was another dramatic paradigm shift for the estate. Alter Ego de Palmer is drawn from the same quality terroir as Château Palmer herself, focusing on wines more easily accessible when young and more consistent during troubling vintages, primarily by revising techniques to produce a wine more immediately appealing to consumers as well as one which commands a more reasonable price tag. Even from a stellar vintage like 2009, Alter Ego sells for around $90 a bottle, whereas Château Palmer fetches upward of $400. There’s less of the latter now, too: Alter Ego now accounts for around 40% of the estate’s primary acreage.

Consistency in product is a goal which Bordeaux had traditionally found elusive, both to their benefit and otherwise, and even—or especially—in the top estates, vintage and quality seem inseparable.

“Massive wines from spectacular years are the Bordeaux that the critics love to talk about,” says Jean-Louis Carbonnier, “But finesse and elegance rather than potency and size are the trademarks of Palmer. We use an unusually high percentage of Merlot, equaling velvety wines with phenomenal aromatics and a lush, but refined palate. But in general, gigantic Bordeaux is the exception, not the rule. Most estates can make great wine in a great vintage; the challenge is making good wine in an awful vintage.” 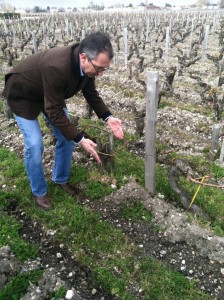 It was these wine we tasted; no sense in tooting the trumpets of 2000, 2005 or 2009—those horns have been blasted by those with deeper pockets and deeper cellars, and that’s where most of them (many purchased en primeur) are already stored.

We tasted a few of the ‘challenging’ vintages, where the objective is to produce charming wines if not stunning wines; character-driven wines if not powerhouse wines—wines with less flesh and more finesse, drawing focus on bright red fruit flavors rather than the brooding blackberry jams of warmer years; wines that are super without needing to be superlative.

And for the most part, I think that Palmer does just that.

This was a season with brutal temperature variations; June and July were hot and arid while August turned wet and cool and the best the doyens can say is that the vintage was ‘interesting’, although some have claimed that it’s among the best values in First Growths.

The 2006 Palmer opens with a blast of plum and violets with a dusting of spice on the nose; this is due, in part, to the quality of the Merlot, which is planted on terroir usually reserved for Cabernet Sauvignon. The tannins are broad-shouldered and puckery and have not yet settled in; the wine can use more age to allow the silken qualities most prized in Margaux wines in general, and Palmer in particular, can rise to the surface.

For growers in the Médoc, 2007 start out bad and got worse—and just as the wineries were about to throw in the towel, September cleared up and became balmy, turning what would have been a Biblical-quality disaster into a Children’s Bible ‘meh’. Even so, the white wines, making up around 11% of Bordeaux’s output, were far superior than the reds. The cloud’s silver (not gold) lining was that the wines are early-maturing and about ready to drink now.

Palmer’s 2007 is light in both hue and aromatics, showing a delicate mingling of black cherry, cassis and fresh flowers on the nose and a rather tucked-in softness in the mouth. Flavors center on bright rather than brooding, but the sensuous velvety feel that is the hallmark of the brand is fully unveiled. It’s a lovely, unassuming wine that is ready for the dinner table tonight.

Pro reports call 2011 ‘one of the most difficult growing seasons in recent history’, alluding to an early bud-break, a summery April and a hot, dry May that led to a premature flowering of the vines.  Near-drought conditions in June were accompanied by a heat spike, making the first half of the year the hottest in six decades. Adding insult to injury, the following month proved to the be the coldest July in thirty years. If grapes can be confused, the vineyards of Château Palmer showed it.

Harvest at Palmer was the smallest since 1961, one of history’s legendary vintages.  But the magic of that year was not replicated; the output at Palmer was around half of what’s normal, and the wine remains sheathed in a barrel of tannins. But underlying the wood is a solid core of cedar, current, mocha and refined, elegant floral spice—everything shored-up by mouthwatering acidity. Too young to Tango, the wine has gobs of potential, and could likely be nurtured into a remarkable selection.

Silken and sweet, the wine is somewhat gentle on the nose, showing tart cherry and raspberry with an underflow that suggests tobacco leaf and integrated chocolate notes.  It’s mouthfilling and briefly luscious, with a fairly rapid drop-off point, but offers a framework of the Palmer trademark at a fraction of the cost.