Wearing Their Hearts On My Mitten: Michigan Wine Competition, 2014

I certainly hand it to the grape council that represents my Mitten: They are one sincere bunch. 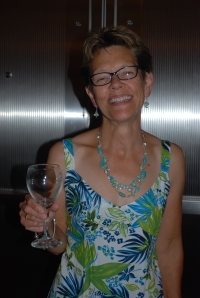 Such punkling puns aside, I mention this because The Michigan Grape and Wine Industry Council held its 37th Michigan Wine Competition on August 5, and last night, I crashed the glorifactory and flatterizing party that was held in East Lansing.

The competition used to be held at the State Fairgrounds before the city that held the State Fair became so dysfunctional that nobody in the state wanted to crash it; subsequently, the judging was moved to East Lansing, a city known for collegiate consumption and party animalization as much as Spartan abstinence.

I’ve covered the event for about half of its thirty-seven year history, reporting on it for a number of publications, and—oddly or not—have never been asked to be a judge, even though my record of flatterizing the winners has occasional exceeded reason—especially when I was a columnist for The Detroit Free Press and was beholden to their glorifactory and flatterization policies regarding Michigan products.

And yet, among the twenty-five Michigan Wine Competition judges, there are plenty of folks who haven’t written squat about Michigan wines for any of the past thirty-seven years (largely because they are not from Michigan), but they do have a national ‘presence’, thus, apparently, add prestige and gravitas to the judging panel.

Which makes perfect sense until you consider that no wines but Michigan wines are entered, therefore, only Michigan wines can win. Where precisely the prestige lies in having (for example) a talk show host from New Orleans decree that the best Michigan dessert wine is a dessert wine from Michigan is for keener minds than mine to deduce.

Note to self:  Gee, Chris, maybe if you stopped being so graphic about this you might get more respect from the grapeheads in Lansing.

In any case, that annual, anticipated Grape Council snub aside, I can certainly state that the winning wines have gotten better every year that I’ve been after-the-fact involved, and were, in fact, better again this year. 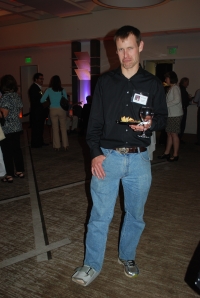 Winemaker Roger Bonga; poor guy thought he had a leg up on the competition

Most wine people are aware of the inherent pitfalls in wine competitions, even if the consuming public—to which awards are directed anyway—are not.  Even so, it is worth mentioning that of 107 wineries in Michigan, only 51 entered wines.  Since the total number of wines judged was 450, I think it’s fair to conclude that less than half of Michigan wineries entered every wine they produce.

Part of the problem is that virtually every winery in Michigan is boutique-sized, and competition rules state that there have to be a minimum of fifty cases of any given entry available to the purchasing public.  This may not seem like a boatload of wine to those with a global grasp of production, but for a lot of start-up, newer Michigan wineries, it is.

Thus, some of the best wines being produced in Michigan may, necessarily, go without a needed publicity shot in the basilic vein.

The Ethical Treatment of Party Animals 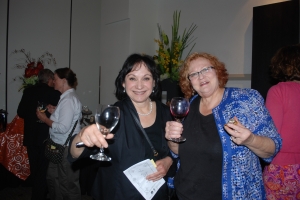 Even so, one of my favorite long-time competition judges, Master Sommelier Claudia Tyagi (who opted out this year due to some tooth trauma and apparently hasn’t learned to transcend dental medication) assured me that the actual judging conditions are as rigorous and principled as can be arranged.  Wines are tasted ‘double blind’, extreme cleanliness is demanded of all stemware and even the restroom soap is certified unscented.  Best of all, they lose the cumbersome point-scale and award wines gold, silver, bronze or metal-free—that’s all.

The results are what they always are in such competitions where huge numbers of wine are sampled, categorized and gilded, leafed, bronzed or cast back into the fire: A wholly subjective slice-of-moments on a single day-in-the-life of mostly young wines tasted in laboratory conditions not likely to be duplicated by a single consumer ever.

Which is fine: As long as human beings are involved, wine judging will remain an inexact science, and as always, I am gratified that the Council has tried to remove any variables—including me—which might skew results.

( *These are wholly subjective slice-of-moment impressions from a single day-in-the-life of mostly young wines tasted in receptionary conditions not likely to be duplicated by a single uninvited consumer ever.

Plus, I disagreed with a few, and the ones I thought should have won are given below…)

Sparkling:  Aurora Cellars Brut, Leelanau, 2011:  One of the downsides of a somewhat incestuous Leelanau wine world is Larry Mawby competing against Larry Mawby.  Larry Mawby won with the wine he sparkled up for Aurora, which is a big, blowsy, yeasty, doughy wine with a sharp apple peel-flavored mid-palate.  Refreshing and somewhat cava-like with a tart finish.

My Pick:  L. Mawby Consort, Leelanau, NV:  In my world, Mawby would have beaten Mawby with his elegant, refined, multi-vintage blend built entirely of chardonnay.  A touch of residual sugar softens the natural acids; the older wines fill in complexity gaps while the youthful core of spritz remains intact.

Dry White Wine:  Blustone Vineyards Riesling, Leelanau, 2013:  For any number of potential reasons (bottle shock, temperature served, etc.) the wine seemed to lack the essential aromatics to decode the variety; the flavors were accounted for in the mouth, but it was mostly basic peachy stuff—a nice wine to up-end and enjoy, no question about it, but more user-friendly than contemplation-ready.

My Pick: Black Star Farms Arcturos Pinot Blanc, Old Mission Peninsula, 2013:  I get the riesling thing already, but this intense, pear-kissed gem from Lee Lutes (who rarely fails to deliver) is a rounded, delightful wine, somewhat low in acid, which brings out the sweetness of the juice and is fully representative of a variety which continues to make strides in Michigan.

Semi-Dry White Wine: Gill’s Pier Vineyard Riesling, Leelanau, 2013:   A bright, fruit-filled nose with solid depth of character—apricot and green apple and maybe a touch of pineapple; succulent mouth-feel, rich on the palate if slightly short-lived on the finish.  No second choice here—this one nails it.

My Pick: Boathouse Vineyards ‘License To Chill’ Pinot Noir Rosé, Leelanau, 2013:  I can live without the excruciatingly irritating name, but the wine is sensational; it offers watermelon and wild strawberry intensity in a balanced, nicely acidic mouthful.

Semi-Dry Red Wine: Lawton Ridge Winery AZO Red, Lake Michigan Shore, 2013:  In general, I might be embarrassed that we need a category for semi-sweet red wine; more so that ‘Best of Show’ is a trio of hybrids (chambourcin, chancellor and noiret) that singly, rarely produce anything spectacular.  But the wine is surprisingly satisfying; dusty, jammy layers with bright shafts of ripe plum and currant shining through.  The wine threw some major sediment into my glass, but otherwise, none of the other wines that competed in the category came close.

Fruit Wine:  45 North Vineyard & Winery Peach Crémant, Leelanau, NV:  Jay Briggs, the winemaker, is young, and indeed, this is a young person’s wine.  In fact, if twelve year olds could drink, they couldn’t produce enough of it.  Not unpleasant by any means, but simple and shoulder-shruggy in a Creamsicle, peach sherbet sort of way. 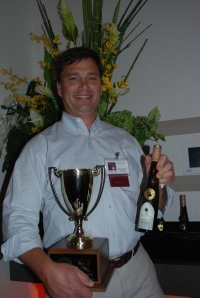 My Pick:  Alas, not entered.  The entire collection of fruit wines from the U.P.’s little-mentioned, oft-overlooked Garden Bay Winery are prize-winners all.

Dessert Wine: Black Star Farms Arcturos Winter Harvest Riesling, Michigan, 2012:  A head-full of ambrosial nectar; a Lee Lutes masterpiece.  As strenuous to make as it is effortless to drink, the wine is creamy with baked apples, lemon cake, maple candy and a racy, shivery crisp finish.  The crowning touch to the competition; no other late harvest wine seemed to bring all elements of the style together so perfectly.