Give Me Liberty, Or In A Pinch—Give Me Another Round

‘Beer is living proof that God loves us and wants to see us happy.’ – Benjamin Franklin 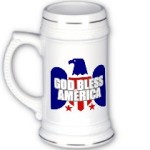 As we approach the monumental occasion of America’s Biquandrandeannualcentennial—our 236th birthday—I believe it’s high time that we returned to the sacred principles upon which this nation was founded right after we stole it from the Indians.

We need to drink more beer.

And more ale and hard cider.  Wine, not so much, unless we can get one of Thomas Jefferson’s house slaves to fetch some decent stuff up from the cellar.

In days of yore, of course, drinking a glass of water was a proposition without plusses: Ponds were rife with intestinal parasites, river water contained blackfly larvae which caused blindness and (this is not necessarily a bad thing) elephantiasis of the genitals, while well water was filled with all sorts of repugnant oppugnants, feces to cryptosporidium to nematodes, and they could cause anything from insomnia to peri-anal itch—whatever that is.

“If You Intend to Date My Daughter, Young Man, Make Sure to Give Her Plenty of Beer And Not Water.”

A very rare photograph of a Colonist brewing beer.

Beer was seen as a wholesome alternative to water; it was considered a food, and as such, was enjoyed by children as much as adults.  Richard Wagner, the non-Die Walküre-writing beer historian from Hatboro, PA, says, “In the Colonial era, a normal family would have gathered for breakfast and all of them—children included—would have routinely received beer to drink. They drank beer like we drink water or coffee.”

Although Americans currently consume more that 50 billion pints of beer per year, the per capita breakdown is pretty lame compared to those characters.  The average meshuggeneh in the Revolutionary War era drank eight ounces of alcohol per day, and the intake of a 1776 ‘gentleman’ is cited in ‘The Making Of A President’ by Marvin Kitman (Grove Press, 2000):

‘Given cider and punch for lunch; rum and brandy before dinner; punch, Madeira, port and sherry at dinner; punch and liqueurs with the ladies; and wine, spirit and punch till bedtime, all in punchbowls big enough for a goose to swim in.’

Kitman goes on to discuss the drinking habits of George Washington: ‘He occasionally took a drink, but never more than a quart or two of Madeira at dinner—beside rum, punch and beer chasers…’

Demon Rum Made Me Do It.  Or Was It Tyrolia?

OK, then.  Based on the above, I have developed a theory, and the more I think about it, the more sense it makes.

I begin with a metaphor.  Or an allegory, or a similitude, or a trope, or whatever it is.

The last time I got my ass seriously whupped, I was a teenager walking down an alley in downtown Detroit after a fireworks display on (appropriately) the 4th of July, and a truckload of skin-headed peckerwoods from Westland or a similar inbred boondock made an unkind, unfeeling and insensitive remark about the length of my hair.  A wise and sober man would have walked on by, but at the time I was smashed on Tyrolia—that foul Teuton-esque sugar wine that I doubt even exists anymore—so instead, I threw the bottle at them.

Anyway, as you recall from seventh grade American History, by signing the Declaration of Independence, our forefathers were effectively throwing a Tyrolia bottle at the most powerful nation on the planet.

At the outbreak of the Revolution, British land forces numbered nearly fifty thousand men, of which seven thousand were cavalry, twenty-five hundred artillery and the rest, those scarlet-jacketed foot soldiers you see in movies.  The Royal Navy consisted of 131 ships under the famous Admiral Howe; when they sailed into New York Harbor in June, 1776, they carried 12,000 soldiers and 9000 German auxiliaries and citizens said that the masts resembled ‘a gigantic forest’.

By contrast, the Colonies had an army of zero (beside a poorly-trained militia) and a Navy of none.

Now, by all accounts, there were some pretty sharp cookies on our side.  Ben Franklin invented electricity; Thomas Paine was among the most versatile intellects that this country has ever produced, Thomas Jefferson was a slaveholder who could convince a nation that all men are created equal, and George Washington was the smartest one of all: He married money.  What would have possessed these bright, articulate, scholarly Davids to pick a fight with the world’s most belligerent Goliath?

They were shit-faced.  Duh.

Marvin Kitman writes, “Alcohol was a ‘household necessarie,’ as [Washington] described extensive purchases of Madeira and other spirits in his account book.  It was good for his health, he claimed.  He had numerous scientific theories.”

Well, I have a scientific theory of my own:  Your choice-making synapses while drunk tend to be a little logic-challenged.  When I woke up battered, bruised and hung-over  the morning after the Tyrolia incident, I felt like the biggest testa di merdi in the history of mankind, and suffice it to say that once she heard the whole story, I received very little sympathy from my girlfriend, soon to be wife, soon to be ex-wife.

I maintained that shroud of shame up to, but not including, the hour I started drinking again.

This guy just can’t tell the damn boys from the girls any more.

Then, suddenly, I was the most macho ball buster in the County of Wayne, willing to fight to the near-death for the honor of my long, beautiful, snaggy, shaggy, ratty, matty, oily, greasy, fleecy, shining, gleaming, streaming, flaxen, waxen, knotted, polka-dotted, twisted, beaded, braided, powdered, flowered, and confettied, bangled, tangled, spangled, and spaghettied hair.

And really, who could have ultimately prevailed against a Ram-load of rednecks who didn’t even have hair to pull?

So, I lost my war and the Continental Army won theirs, and I suppose that George Washington, Thomas Paine, Thomas Jefferson and Ben Franklin spent the rest of their lives snorting Madeira and patting themselves on their collective, odds-beating backs.

How the mighty have fallen

Good on ya, boys!  I suppose I might have been able to do the same thing…

…if only the goddamn French had come to bail me out.

Well, thanks for that one back in the eighteenth century, France.  Although after Normandy, I think we’re probably even.

This entry was posted in BEER and tagged 4th of July beer. Bookmark the permalink.