I don’t use the word ‘repulsive’ lightly, but there’s a drink called  a Montana Mule that’s made with draft beer and tomato juice and it tastes like you swigged a V8 that had been accidentally left open on a screened porch since 2004. 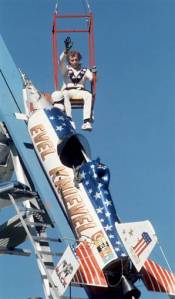 That’s the drink, and copious quantities thereof, that made Evel Knievel decide to jump the Snake River Canyon.  These days, a much more sedate beverage is being concocted on the shores of that same river, a tributary of the mighty Columbia which forms the border between Washington and Oregon.

Pioneering red wine grapes in sagebrush country may sound a bit less romantic than rocket-cycles and  crash landings, but on the other hand, Jeff Gordon is hanging around while Evel Knievel is at the Pearly Gates trying to explain his first name to St. Peter.  Both gentlemen were envelope pushers, and in the mid-Eighties, when Gordon decided to switch from alfalfa to cabernet sauvignon, his neighbors figured he’d been nipping at the London Dry from the ginmaker who shares his surname.

A quarter century later, Gordon Brothers Family Vineyards has rendered the most vocal naysayers mute—the best proof of which is that nearly all of Washington State’s six hundred wineries now produce merlot, cabernet and syrah, making red wine one of the Columbia Valley’s most acclaimed contributions to mankind.  Names like Chateau Ste. Michelle and Leonetti may spring from one’s random access wine memory quicker than Gordon’s does, but along with the advice of Walter Clore—to Washington wine what Johnny was to apple seeds—the wellspring of award-winning reds from these hallowed wineries can be traced to Jeff’s bold experiment.

So, thirty years on, with most Washington wineries hogging seats on the bandwagon, a basic viticultural shibboleh—which is that the older a vine gets, the better the wine it produces—gives Gordon’s latest releases, 2006 Cabernet and Syrah added concentration and complexity.  After three decades of pushing out clusters, a vine begins to self-regulate, producing fewer, smaller and sweeter grapes.  The roots, meanwhile, in search of trace nutrients, have had time to worm deeply into the soil—in this case composed of volcanic breakdown—the upside of living in Mount St. Helens’ hood.

Old vines is an advantage with which even his fiercest rivals can’t compete.

Today, Jeff stands in the formerly sagebrush-covered slopes overlooking the Snake River, now resplendent with syrah, and one wonders what new idea is swirling around the primary fermentation tank of his mind.

A rocket-powered harvester, quite possibly.

Gordon Brothers Cabernet Sauvignon, Columbia Valley, 2007, about $23: A plush, cedar-rich nose superimposed over layers of pepper, blackberry, olive and cassis; a long finish filled with barrel spice and caramel on the finish.

This entry was posted in Columbia Valley. Bookmark the permalink.