Shannon Walters: A Friend with Weed Is a Friend Indeed

My old pal Shannon Walters is perhaps the most charismatic winemaker in Northern Michigan. At least, he used to be. At any tasting or press junket, he stands heads above the crowd with his rock star persona, Fabio fringes, signature top hat and at least one beautiful woman on his arm—wife, girlfriend, daughter, depending on the year: At least he used to. He has a string of medals and awards from prestigious wine competitions as long as the Leelanau Peninsula Wine Trail, although currently, he may have mothballed them to make room for a new string of awards… from the High Times Michigan Medical Marijuana Cannabis Cup.

Yes, my man Shannon has completed the hat trick of wine, women and bong; the latest addition to his resumé is the second phase of a career spent providing attitude adjustment to the masses.

This time, he’s a friend with benefits—health-related ones.  Shannon’s full-bore foray into high quality (no pun) medical marijuana will focus on strains with elevated levels of cannabidiol—what the industry refers to as CBD—one of the 85 known active compounds found in weed. Most of us with a history of doobie dabbling are familiar with the other three-letter acronym THC, because that’s the stuff that makes you feel all weird and giggly and happily paranoid.

Historically, purveyors and connoisseurs alike have focused on blunt bang for the buck, or more THC. But as Shannon points out, for medical use, CBD is the real consumable devoutly to be wished. CBD has analgesic, anti-inflammatory and anti-anxiety properties and is proven effective against Crohn’s disease, PTSD, multiple sclerosis and perhaps, most dramatically, Dravet’s Syndrome, a debilitating form of childhood epilepsy. Current treatments for Dravet’s are as crude as leeches for blood-letting and include eye patches, high-fat diets and dubious brain surgery, while among test patients, CBD-enriched cannabis reduced seizure frequency in 85% of children and 14% reported complete seizure freedom. Children also saw improvements in sleep, alertness, and mood.

Best of all (or worst of all, depending on your goal), cannabidiol provides the balm without the buzz. Not only does CBD not have psychoactive properties, it was initially believed that its main function was to counter them.  In any case, the auxiliary medical benefits cannabidiol seem, in these early days, to be astonishing.

“The destructive effects of alcohol are well known,” says Shannon, “so it’s great to be on the ground floor of this revolution in medicine and the changing mental landscapes. It’s the end of Prohibition. I’m comfortable here; like winemaking, weed cultivation is farming first, then processing the produce. It shares many of the same approaches, including a constant search for varietal character. This time, I’m focusing on something with whose impact on the human body is positive, not negative.”

In other words, people drink in spite of the side effects.  People smoke weed because of them.

Now, on one point, he’s insistent: Everything he’s doing is above board and legally copacetic; he is licensed caregiver with a number of patients; he owns property zoned for retail, and in another year, he should qualify for another license that will allow him to grow up to 1500 plants and open the Midwest’s hippest dispensary.  Currently, he grows 72 plants in a remarkable Jurassic Park-like closed system, where seed to-harvest-requires about half a year.

“That’s three months vegetation, about 2 ½ months flower,” Shannon says. “And when I ratchet up to a commercial cycle, I think I can cut that time in half.”

From a boy like me—with roots in smoking Mexican brick schwag and backyard plants grown furtively in non-optimal corners out of view of cops and robbers—Shannon’s wares are pretty amazing, as the accompanying photos attest. Plants are six feet high, and heavy with purplish flowers frosted with snowy, sugary-looking crystals; the buds are gorgeous, compact and ethereal simultaneously. They have names as colorful as they are: Princess Leia, Romulan Grenade, DeathStar, Space Jill—yeah, the nerd genealogy is not lost on me either.

These are not Shannon’s proprietary names (some are from Pure West Compassion Club, an alternative healthcare facility in Holland, Michigan)—but those will come in time. His company LightSky Farms (LSF) fully intends to develop strains that fit the particular chemical and organoleptic profile he’s after. Again, the glossary he uses comes directly from the winemaker’s playbook—varietal expression, differences between hybrids, and especially, the value that terpenes play in everything from initial bouquet to palate flavor.

You can take the winemaker out of the crush pad, but you can’t…

Says Shannon’s web site (address at end): ‘Without belittling THC or CBD, many growers and extract artists alike have set their sights on terpenes. THC alone has little to no flavor, while CBD can taste like cherries on its own. The real flavor in a good concentrate comes from the terpenoid content. Terpenes affect the consistency of an extract; shatters, waxes, saps and live resins differ mainly by their terpenoid profiles due to their different extraction and processing methods. Making live resin involves using fresh, frozen cannabis that hasn’t lost any terpenes to evaporation. CO2 extracts can have higher than normal terpene content from re-enrichment.’ 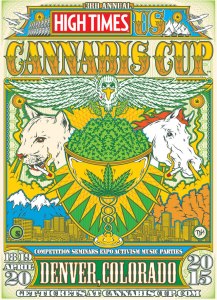 In 2015, LightSky Farms took a silver medal at the Cannabis Cup in Denver in the category for terpene content with an entry topping out at 8.5% terpenoids per total mass.  To level set, the gold medal contained 10% terpenoids and bronze, 7.3%.

Terpene oils add flavors to weed that are pretty close to wine descriptions too: They range from citrus and berry to mint and pine.

In fact, you really need to reference a few current articles in High Times to see how exacting and super-serious kush kulture has grown in the decades since high school; reggie reviews are as verbose and at times, as absurdly funny as blurbs in Wine Spectator.  I shit you not; these are direct quotes from a Cannabis Cup review:

… the flavor slightly changed to a hashy/funky wet gym sock in a locker, with a slightly rancid aftertaste…

And this, mind you, was for an entry that won.

There are two main species of cannabis, Sativa and Indica, and there are discernable, definable, explicable differences between the way they go to work on the human system, both upstairs and downstairs. This is an oft-quoted comparison, and although it simplifies a lot of complicated brain chemistry, Sativa, when smoked, tends to make you energetic and cerebral; it fosters focus and creativity. Indica, which has a higher CBD:THC ratio, fosters ‘couch-lock’—it slows you down, calms you down, and improves sleep, reduces migraines and reduces spasms and seizures.

Both species have their place in the Brave New World, and it’s fair to say that Sativa allows you to come up with ways to capitalize on Indica.

I’ve followed Shannon’s career from its beginning as an upstart vintner without formal training who flew by the seat of his pants to earn praise and respect by creating wine for a dozen Northern Michigan wineries, culminating in his One World Winery Consulting business, which is still in operation.  I’ve seen him in couch-lock and in hyper-creative brainstorming. Lately, I see more of the latter, and for the future of the medical marijuana industry, that’s a good thing.

4 Responses to Shannon Walters: A Friend with Weed Is a Friend Indeed