If I am bombarded with another vow of poverty from some hack wanting me to send him free money to pay for a wine book he hasn’t written yet, I may commit Harry Karis. 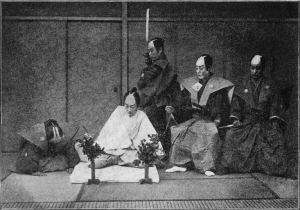 This ancient method of ritual suicide is performed by inserting a serpent’s tooth into your pants and disemboweling your wallet.  It’s part of the Author’s Code of Honor that permits us only to accept payment for literary works after it has been written or if a publisher offers it as an advance against sales.

I like ritual.  I especially like ritual intended to protest members of my community, wine book writers, for bringing shame to our fellowship.  If this sacred mission requires me to spill innocent ink, so be it.

Preaching plonk to the peasants

Having spent years funding my own wine books in the belief that I am on a divine mission from God, and that are rewards are guaranteed in the next life if not in this one, I take it as my sovereign duty to expose the industry’s false prophets—those who pretend to spread the Gospel According to Grape as part of some ‘ministry’, but who are actually only in it for the dough re mi.

Think of me as your personal  Thích Quảng Đức—that whacked-out Vietnamese Mahayana Buddhist monk who set himself on fire in 1963 to protest the American puppet government in Saigon.  I am all four Kent State students rolled into one; I am raising a juice-stained fist for Purple Power. I am Matthew—the handsome Apostle—declaring wine’s glory among the nations, and let me tell you from my heart, disciples: I believe GoFundMe wine book projects are a sign of the close of ages, and this may be your last chance to repent before the end of times.

I hate to be reduced to using potty mouth to preach a hymn, but for fuck’s sake, people: Aren’t there already enough fucking wine books on the fucking shelves without encouraging somebody to write one that even publishers—whose job it is to evaluate viable projects—don’t want?

So, Harry Karis—a British wine dude who will henceforth and hitherto be referred to by his real name, 切腹 —pronounced ‘Seppuku’ according to some Japanese babe I know—has launched a crowdfunding self-charity campaign on some idiotic platform called ‘Fundovino’.  He wants to write an entire volume about Grenache, rationalizing the need for such a book with this Fundovino introduction: “It’s weird that when talking to even so-called knowledgeable wine lovers how many do not know that Grenache is the main grape variety in Châteauneuf-du-Pape…”

Apart from the sentence’s abominable structure, I can see why the situation strikes Karis as weird: According to amazon.com, he has already written four books about Châteauneuf-du-Pape, so if these so-called knowledgeable wine lovers haven’t gotten the memo yet, I’m not sure how he figures another book will help—the so-called knowledgeable wine lovers are apparently not reading him in the first place.

Well, potential publishers are correct if they assume that not many people want to read a book about a single kind of grape.  I know this because I am currently writing a book about a single kind of grape—Norton—and I happen to sense instinctively that nobody wants to read it.  Am I wrong?  Since I want to write it anyway—the Norton story is fascinating, under-reported, and worthy of a closer look—I accept that it is my literary obligation to whet your whistle via lagniappes—i.e., freebies.  I rely on an ancient ritual known as snippets and smidgens, morsels and sample chapters in the belief I can make Norton interesting enough to hook you into its story without needing to hold up a sign on a freeway onramp.

I release sample chapters on my web site, which is also self-funded, advertising-free, and does not come with a fee for subscribers, nor would I have the slightest respect for you if it did come with a fee and you paid it.

To that, as the guidos say, ‘Ma vaffanculo’.

In fact, in the core of my being, I feel no temptation to ask you—a potential reading public—to give me a hundred fifty thousand dollars to write ‘Norton Wine: Walking Off To Look For America’.

Can’t you just use this one?

My personal favorite is the $3300 that Scary Harry needs for ‘cartography’.  I’m not sure what the going rate for cartographers is these days, and am willing to defer to craigslist, but since the south of France was mapped in the 16th century, I am thinking this is what those of us who turn in expense reports call ‘padding’.

In defense of Master Belly-Ripper’s master plan, however, if one should decide to hop on board the Oblation Express and palm him some alms, there are several benefit strata to count on that extend beyond the basic feel-good fuzzy you’ll get knowing you did your part to save the world’s last map-maker.

For an entry-level contribution of $22, you’ll receive a downloadable version of Karis’ last book about Grenache, ‘The Chateauneuf-du-Pape Wine Book’, which is probably better than a free copy of his other last book about Grenache, ‘The Chateauneuf-du-Pape Wine Guide’, which only gets two out of five stars on Amazon and includes a customer review reading, ‘Worst book design I ever encountered. I hope the paper is recyclable,’ which just plumb, dad-gum mean.

For a hundred dollars, you’ll be rewarded with a copy of ‘Grenache’, which will ultimately sell for around $80,  which is a net loss of $20, and you will have to wait until the book is released in 2018, hoping you don’t die in the meantime.  Frankly, for sheer return-on-investment, I feel that a two-star book in the hand is worth a potential five-star book in the bush, especially since it hasn’t been written yet.

For  $400, you shall be wined and dined in Paso Robles, CA, at a dinner and seminar hosted by Señor Seppuku, and you will also get a free copy of the grape book, postage included.  Of course, you still have to get yourself to Paso Robles—your donation may pay his travel expenses, but it doesn’t pay yours.  And, just playing devil’s advocate here, since you are going to the dinner anyway, why doesn’t Karis save the postage and simply hand you the book when you get there?

Finally, the American Express Centurion level, the rarified atmosphere of the exclusive, ne plus ultra circle of sponsorship, the $1000 Emperor’s suite nets you 25 copies of the book.

So, there’s your strategy, people-who-want-to-make-an-investment-but-don’ t-care-to-read-a-whole-book-about-Grenache-let-alone-the-same-one-25-times.  Our dear friends at amazon.com claim that used copies of ‘The Chateauneuf-du-Pape Wine Book’  are going for $79, so if you hand over a thousand dollars now, you may be able to turn that into nearly two thousand dollars on Amazon in two short years.

Mind you, I am not here to tootle my own horn, but if I was, and intended to panhandle $150 k so you could hear the horn before I’d even learned my scales, you might assume that I had the biggest set of stones since they built Easter Island.

Instead, I’ll tell you how real men go about writing wine books:

First, we choose a topic that we haven’t already covered in our last four wine books.  You know, just to mix it up a bit and keep it real.

Then we rent a car on our own nickel and drive to wherever it is we want to write about.  If we go in the summer, we sleep outdoors, under the stars, in vineyards, and if it tarantula mating season (‘A Rite of Paso’, 2013) we try not to make sounds like a girl tarantula.  If it is the middle of winter, we throw down a sleeping bag inside an abandoned shack on state land (‘Heart & Soil’, 2014) and pray we don’t get eaten by Wendigo or loup garou or whatever haunts Northern Michigan forests.  If it rains for a week, we sleep in our cars (‘Walking Off To Look For America’, 2016), and when we’re back at our silly little desk, dry and warm again, we write pretty words about interesting experiences, beholden to nobody, nobody required in advance of publication and nobody looking at their watch waiting for swag or pelf.  We write honest books on a shoestring.  We break a sweat.

“Let me read to you from my latest tome…”

They may not be showroom glossies with which you can dress up a book store window—they’re meant to be read, not admired.  They don’t cost eighty bucks, either; new or used.  They don’t rely on seamless, panoramic photographs or hefty stock or dust jackets.  They rely on real stories with real heart and real soul, muscle and sinew—far more than any mooched junket to Vaucluse can bring to the coffee table.

Want me to prove it?  Loan me your harikaris tanto—I’ll eviscerate a chapter, spill its guts and show you.

Or better yet, look it up on line: It’s free.

This entry was posted in GENERAL and tagged gofundme. Bookmark the permalink.