Not really. But sometimes, don’t we all wish that this juggernaut pop culture train could be wrapped up in yesterday’s New Yorker and stored on a shelf of puerile simplicity, much as Banksy and Andy try to do? 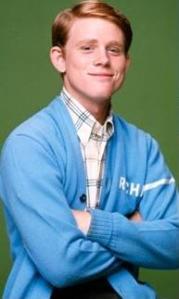 They outed him; he is Robin Gunningham.

I was profoundly disillusioned, mind you—especially once I found out Robin Gunningham is not the son of Marion Ross and that Banksy doesn’t have a friend called Fonzie.  If you are going to unmask Batman, make sure he turns out to be a really cool altruistic billionaire operating from some dark caverns of psychosis, not some pudgy middle-class kid who never outgrew prep school and has made a career out of being Thomas Kinkade for street people.

Which is who the Dark Tagger, the Anti-Establishment Crusader, the Valorous Vandal, winds up being.  ‘Look, up in the sky: It’s a bird!  It’s a plane!  It’s… another Pleasant Valley Sunday.’

Oh, well.  Meanwhile, for reasons that have proven to be an even harder task than finding Banksy, it’s impossible to explain why the New Yorker—a publication with a reputation for decent writing and sophisticated social commentary—continues to reprint the same Andy Borowitz column over and over again, with only a few words swapped out in the hope that we don’t notice.

Like Banksy, Borowitz is a sophomoric expositor of modernity attempting to tap into all those sophomoric emotions that surged through our veins when we were, in fact sophomores.  Since most sophomores manage to dodge reading anything longer than ‘Old Man and the Sea’ by buying Cliff’s Notes or Classic Comics versions of assignments, I will offer you a neatly truncated summary of the worldview contained within every… single… epiphany… that the Doofus Duo of Team Trite has foisted upon us.

Borowitz: Americans are stupid, except me.  Ha ha.

Banksy: People are evil, except me.  Boo hoo.

Yes, it is florid teenager hyperbole, and yes we all went through this phase in high school, and yes, most of us matured beyond it by the time we graduated from college, and no, we do not need to be continuously barraged with the transparently obvious, especially since every offering by either one comes with a all-you-can-stomach side-dish of ‘Do you get it?  Do you get it?’

Make no mistake, gentlemen:  We get it.

And we have gotten it since Ms. Atkins’ ‘Creative Writing’, third period, right after Biology.

Enough About Me.  Let’s Talk About You…

So, suppose you—my long-suffering and deeply hallowed reader—happen to love these two snugglemuffins, almost as much as you do Winnie and Eeyore and those precious ‘Love is…’ posters from the 1970s.  Let’s imagine that you find their brand of humor less shallow than moi, and that you have a soft gonadal spot that needs to be filled over and over and over and over with reminders that a) Trump is a douchenozzle and b) mega-corporations care more for themselves than they do for the human race.

Do do you know what else that probably means?  It means, more than likely, that you also genuflect before that other altar of guffaws whose disproportionate popularity I cannot, for the life of me, grok:

There are entire websites devoted to single panel New Yorker cartoons; big books are filled with them, fan clubs are devoted to them, contests are regularly entered to ‘fill in the caption’ beneath a blank, predictable, crackerjack-prize drawing, adding to a cosmos of New Yorker humor flat-liners.

Yet, such ‘observations on life’ continue (and methinks, will continue to continue) to pepper New Yorker pages like puddles of Pollock paint on a random, unfunny canvas.

On the other hand, if you (and God bless your sheltered little soul if this be thee) have no idea what I am talking about regarding any of this, I will now present examples of each, offering a brief, explanatory breakdown of the tee-hee quotient; then I’ll leave it to you to titter tremulously, chortle merrily, laugh outrageously, hemorrhage uncontrollably as your sides split, or simply roll your eyes and move on.*

* This is part of my ‘Idiotic Humor For Idiots’ series for which I fully expect to be sued by the publisher of those ‘[Fill in the blank] For Idiots’ books. 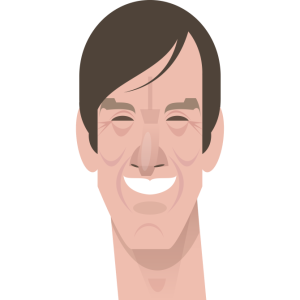 ‘Trump Relieved that KKK Support Did Not Hurt Him in Alabama’

“March 1, 2016: Republican front-runner Donald Trump said on Tuesday night that he was “tremendously relieved” that the recent controversy linking him to the Ku Klux Klan had apparently not hurt him with voters in Alablah, blah, blah, blah blah….

Interpretation:  See, Donald did not immediately distance himself from the endorsement of former Klansman David Duke, so wouldn’t be a rib-tickler if Andy pretended that Trump won a state where everybody knows that everybody belongs to the K.K.K. and hates black people—except probably the 1,250,000 black people, more than a quarter of the population—who live in Alabama?  I mean, it would be funny, wouldn’t it? 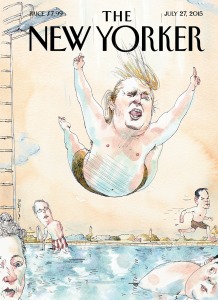 Interpretation:  We should re-name Andy ‘Silly Willie’ for his two-for-the-price-of-one joke. Imagine finding a way to (on one hand) make wry commentary about ‘social communities’, where we sad-sacks poke, message, Tweet, Buzz, ‘like’, link or circle others of our ilk with common interests, passions, careers or lifestyles and (on the other hand)  America’s legendary love of murdering ourselves with firearms, which makes us the laughingstock of the rest of the world, up to, but not including, the moment the rest of the world needs us for some more free money.

You go, Silly Willy! You go, rest of the world!

…or should I say ‘Mr. Robin Gunningham’?  Here is one of Banksy’s tours de force… 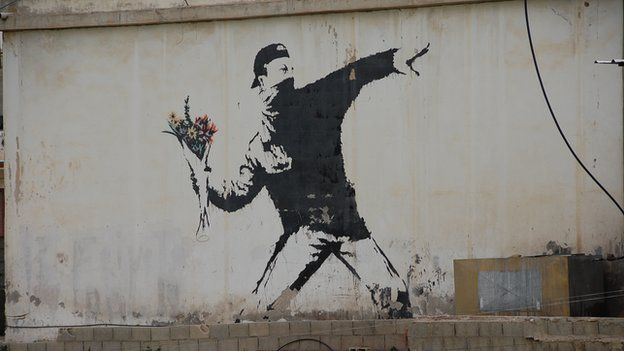 Interpretation:  This is a stencil of a bad guy throwing a Molotov Cocktail, but instead of an explosive device, Banksy has substituted a bouquet of flowers.  He means, like, wouldn’t it be cool if terrorists threw tulips instead of TNT?  A concept so revolutionary that nobody on the planet has thought of it before, at least not since eight trillion Flower Children did in 1969. 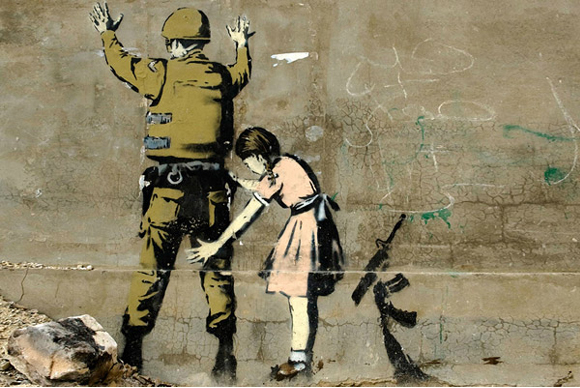 Interpretation:  Oh, now, here’s a switch, huh?  It isn’t the big burly army man frisking the cute pinafored missy like happens in real life all the time, but the little girl frisking him.  The only thing that could make this juxtaposition zanier is if Benny Hill music was playing while you look at it and maybe a naked nine-year-old Vietnamese girl in the backgound was lighting an American war correspondent on fire. 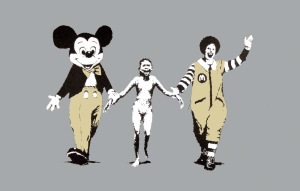 Anyway, back to Banksy. 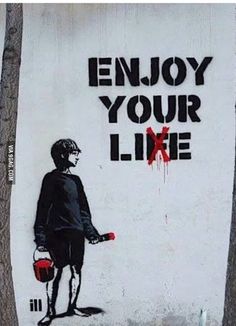 Interpretation:  Read it first with—and then without the ‘F’!  You’ll see.  It isn’t really a ‘life’ you’ve been leading; it’s more like a ‘lie’!

A lie perpetrated by everything that bleeding-hearts like Banksy despise:  Fast food, war, big business, Manifest Destiny and most of all, Banksy knock-offs. 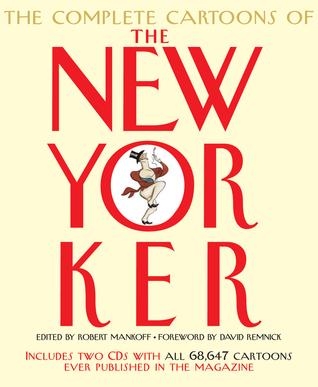 The cartoonist whose work appears in the New Yorker is not so lucky.  He (and New Yorker cartoonists are overwhelmingly male) has no ready-made fan base.  He relies on a bored reader glancing at his panel, and to get there, he has compete for page real estate with dozens—nay, hundreds and probably thousands—of other cartoonists.

Thus, to win that valuable corner beneath an excruciatingly dull profile of Yahoo’s CEO and a mind-numbingly overwritten go-nowhere short story, he has to be topical and sardonic and abstractly cerebral, and a word to the wise: It helps if your cartoon joke can combine not one, not two, but three values held sacred by the typical New Yorker subscriber.

Which means, it has to be a joke aimed at someone who is well-off, but hardly bulletproof in the face of recessions, adventurous—but not with hobbies that are overly strenuous or particularly dangerous—susceptible to trends, but still able to poke gentle fun at them, and above all, Caucasian. 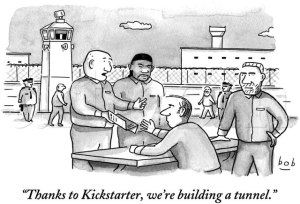 A rare Negro in a NYer cartoon.

This may seem to be a obscene sentiment, but if you do a random sampling of New Yorker cartoons, you’ll find that they are almost all about wealthy white people engaging in some situation or conversation that twenty or thirty years ago would have made no sense.  Granted, it is hard to draw cartoons of black people because you’re never sure if you’ve crossed the line to a racist caricature, and simply shading a white person cartoon figure to make him or her look African American is sort of ludicrous.  But that’s  exactly what cartoonists do when a token black person is inserted into a panel among the honkies, or if the joke happens to be about black people to begin with.  Wealthy black people who are adventurous and susceptible to trends, mind you.

So, this cartoon totally fits the New Yorker paradigm: 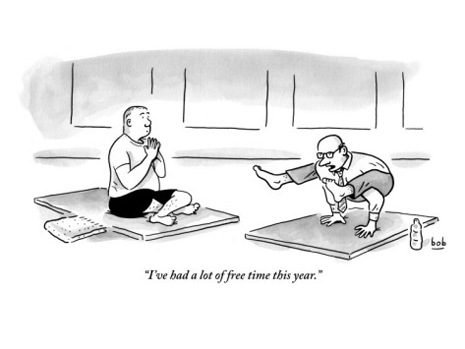 Interpretation:  Get it?  Get it?  For the sake of comedy, I will extrapolate: This difficult-looking yoga pose is named ‘Sūrya namaskāra Dhánuśvānāsana Upaviṣṭha’ which translates to ‘Forward-facing wealthy white man who has suffered some economic setback over the past year and has had a lot of extra time to work on his relatively safe hobby of yoga, and now can do something really, really hard.’

So, now I figure I’ve done my part and I call upon any of you, my numinous confederates, my sanctified intimates, my bosom buddies, and especially those of you who really do like New Yorker cartoons, to explain this one to me.  It has no caption; is it supposed to?  It has Negro people in it—is it supposed to?

This is exactly the way it appears in Google images and brother, I don’t get it!! 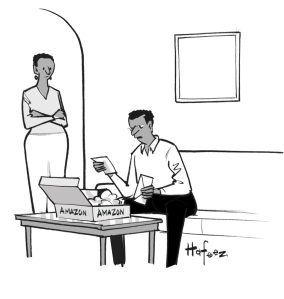 Message me if you can figure this thing out:  I’m on my way downtown to out Banksy’s Detroit-based brother, Cracksy Headsky.