Is Danny Meyer a Twat? …And Other Rhetorical Questions

Good news, Foodies—there’s a new buzz word you can latch on to!

This one describes all fourteen of Danny Meyer’s New York-based restaurants, among them Gramercy Tavern, Blue Smoke, The Modern and Union Square Café.

This is the column I swore I wouldn’t write, because—truth be told—I couldn’t care less what Meyer and his self-described ‘beloved and celebrated’ embolus of ‘it’ dining rooms in New York are up to.

Entrance to the Holland Tunnel

To me, they are irrelevantly and desperately trendy, and the ones I have visited have struck me as ‘worth it’ only in so far as anything conspicuous in Manhattan is worth it, since to get there you have to first cross the Hudson, which (not unlike the River Styx) has a sign above it reading, ‘Lasciate ogne spesa razionale, voi ch’intrate’—‘Abandon rational spending, ye who enter.’

Once that is entrenched in one’s psyche, spending $14 for fourteen cents worth of liquor makes perfect sense, because you are consuming it within the confines of a hipper-than-thou comfort zone, where front-of-the-house staffers are (in Danny Meyer’s words): ‘Diplomats in a much larger body politic; emissaries representing the face of an entire group of individuals.’

I think I just upchucked a gratuity’s worth of $42 Rodenbach Sour Red Vintage Ale, but in the end, the mealy, ingratiating smarm is not my issue; that goes with the hospitality calling card.  It’s the business mantra we expect from all restrauteurs while understanding instinctively that is as workable in real-time as is law enforcement’s vow to ‘protect and serve’.

Why?  Because both public servers and public servants are drawn from the ranks of genuine human beings who occasionally bring personal baggage (and hangovers) to the workplace and perform their functions less as emissaries to a body politic and more as pissed-off wankers having a bad day. 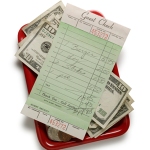 To deal with the rogue cops, We The People have invented 18 U.S.C. §§ 241, 242 which imprisons police officers who violate civil rights, and for the rogue waiters, we have invented tipping.

The value in both we hold to be self-evident. 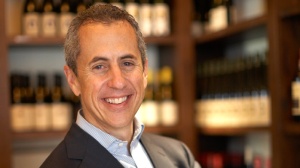 But Danny Meyer has recently made waves—which were more like tsunamis—by boldly announcing that he is ‘eliminating tipping’ at all of his Union Square Hospitality Group eateries, for a whole bunch of reasons (which I’ll get to), but all of which can be distilled—like hyper-voguish Vago Elote Mezcal—into a single defining sentiment:

Now, Danny Meyer has—by necessity—been forced to couch this notion in all sorts of altruistic wage-equality and vanguard-of-fairness language, and this has been lapped up by such advertising-dependent sycophants as The New York Post who is on record with a hyperbolic back-scratch article entitled ‘Why A No-Tip Policy Will Save American Dining.’

Frankly, I wasn’t aware that American dining was up against extinction, but that’s fuel for a different conflagration. What I am aware of is that according to Business Insider, Danny Meyer’s shares in USHG are worth around $386 million, so if he chooses to pay line cooks a mere 25¢ more per hour than they can make at McDonald’s (and this is Manhattan, mind you) it’s not because the wolf’s at the door of profitability; it’s because Danny Meyer is a cheap fuck.

Again, that’s his business, not mine—if I wanted a job at USHG, I’d drop off an application. ¡Viva Empresa Libre!  Cheap, I get.  Grandiose and patronizing bullshit, not so much.

Let’s look at some of Meyer’s statements regarding the no-tip rule and try to reconcile them with reality:

“The gap between what the kitchen and dining room workers make has grown by leaps and bounds. In my 30 years in the business kitchen income has gone up no more than 25 percent. Meanwhile, dining room pay has gone up 200 percent.” 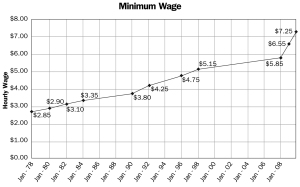 In which case, he may have a point.

But since a tip is based on a percentage of a total bill, if waiter tips have gone up 200%, so have Meyer’s menu prices, which is the money I hand over with the expectation that he is paying vendors and landlords and cooks fairly to begin with.

“We believe hospitality is a team sport, and that it takes an entire team to provide you with the experiences you have come to expect from us. Unfortunately, our cooks, reservationists and dishwashers aren’t able to share in our guests’ generosity, even though their contributions are just as vital to the outcome of your experience at one of our restaurants.”

Weird.  So, his solution is not only to remove the incentive for guests to be generous, but to actively discourage future displays of generosity. Erin Moran, USHG’s chief cultural officer (and not the Happy Days chick) explains: “The restaurants won’t prevent the leaving of cash tips, but we will do whatever we can to strongly dissuade them…”

Like what, Erin?  Scolding reminders throughout the meal?  Big Brother signs above the bar? Perhaps you could revive those cold, isolated, shame-inducing ‘Smoking Sections’ you used to squirrel away by the restrooms.  ‘Tipping or non-tipping section tonight, folks?’

“The American system of tipping is awkward for all parties involved.” 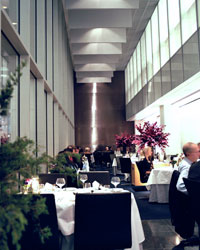 Tipping, on the other hand, is a nice little ritual that has developed between myself and my server through which I can offer personalized, unspoken feedback as to the quality of our interaction.

Why that should be more awkward than tracking down the floor manager and squealing on a sucky waiter is unclear to me. Unless, under the new rules, nobody is allowed to complain if they pay a significantly higher price for a service expectation that fails to materialize.

Ah, because pay extra they will:

The engine that drives the new Meyer concept is pricing, which will rise accordingly. In an interview with Eater’s Ryan Sutton, Meyer outlined his plan to launch his first tipless joint at The Modern, where each dish will become between 30% and 35% more expensive, to ‘right’—in Danny’s opinion—‘the labor of wrong’.

So, if I am understanding this correctly, I will pay 30% to 35% more to dine at an establishment that offers me a chance to avoid a 15% – 20% tip, which was discretionary anyway.

To you and me, Mr. and Mrs. Logical Diner-Outer, there is something distinctly un-right in this ‘righting of the labor of wrong’, making it seem even wronger.

But to Danny Meyer—who can otherwise expect to lose up to $1.5 million in the tax credit available to restaurants who do not pay servers a straight salary—it makes business sense for us to absorb the financial fallout instead of him.

What it means is that at a Meyer restaurant, I am suddenly forced to subsidize what may be a mediocre service experience with no opportunity for recourse other than to whine like a little bitch to some entry-level maître d’ who I can’t even tip heavily for firing the incompetent schmuck who ruined my evening.

How exactly does any of this improve my dining experience? Especially if it costs me more than it would have had Meyer left well enough alone?

I know, I know—in a perfect world, all those shitty servers would be hunted down like lawn voles and liquidated. In the real world, however, top servers at top restaurants see boatloads of green—the very thing that makes Danny see red.  A hundred dollars for a four hour day shift is a minimal expectation for a decent waiter, and that comes out to $25 an hour, not the $10 or even $12 that Meyers will now pay them.

I have no doubt that USHG can find plenty of reasonably qualified individuals to sling plates of overpriced food at customers, but the true superstars of the service industry—the ones who can multitask and turn-and-burn and keep everybody happy—are rarities. Why in the world would they take such a drastic pay cut based on some fiction about righting a labor of wrong?  You’d sooner get white longshoreman to agree to accept half the salary of black longshoreman to make up for slavery.

And especially since most other top-shelf restaurants in Manhattan will (at least for now) adhere to the old system, wherein they can earn—via tips—a six figure salary.

And for the sake of argument, suppose a few of the truly stellar Meyer servers decide to stick around the ol’ twattoria? Figure that as the front-the-house manager, you’d want to hang on to them by any means necessary. Therefore, considering that all shifts will pay the same, which ones do you assign them in order to keep them happy?  Laid-back Monday afternoons with a handful of guests, or beyond-control, painfully difficult, stress-mad prime-time Saturday evenings?

Here’s a hint: You’d be forced to give them the shifts where you least needed their particular, hard-won skill sets, because I promise you, if they can get them, they will want their Friday and Saturday nights free.

As I said at the git, I did not initially intend to cover this topic because I discommode enough people in the wine biz without making extra enemies in the restaurant world.

But something lingered with me  like a latent case of botulism, and I finally figured out what it was, and thus, I felt driven to comment.

Tipping to Be Eliminated at Danny Meyers’s NYC Restaurants

And that’s what stuck in my craw like a pinbone from a clay-pot-roasted brook trout: The bald-faced arrogance of Danny Meyer announcing that he is eliminating something that was never mandatory, never demanded and never within his control to begin with.  Eliminating?  Tipping is not the bailiwick of a restaurant’s proprietor, its executive chef, its general manager or the guy who comes in early Saturday mornings to wash the windows—it is a private transaction between l’garçon et moi. Meyer’s insistence on interjecting his smarmy presence at my table is a presumption as unwelcome as if he sat down while the waiter was describing the specials and drank from my $14 cocktail.

Take it to the bank and deposit it along with your 400th million dollar, Danny:  If I want to slip the waiter a twenty for putting up with your condescending twattery, I would consider it unforgivably inhospitable if you or Joanie fucking Cunningham tried to get in my way.

4 Responses to Is Danny Meyer a Twat? …And Other Rhetorical Questions