Finger on the Pulse: Wine and Water

You may not know it, but the Ohio Turnpike comes with its own soundtrack.  It kicks in as soon as you leave the onramp and consists primarily of white Gospel music.

If you’re not familiar with that genre, let me point out in advance that white people cannot produce Gospel music with any shred of credibility.  The singers tend to be saccharine crooners like Pat Boone or holdovers from barbershop quartets.  They have voices that sound like angel food cake frosted with Crème Anglaise and soaked in Milk of Magnesia.  They slither from the radio in a glissade—from programs like Amen FM and Faith For Tomorrow—and the recurring theme of all the songs seems to be, ‘Jesus, I am  not worthy’ and ‘Lord, I am undeserving.’

In this, they are probably correct.

The Ohio Turnpike is largely hand-painted.

The Ohio Turnpike pokes through the plumpest agricultural portion of the Midwest, a milieu largely dominated by plump white  Christian people.  During summer’s apex, the stretch between Toledo and Pennsylvania portrays Flyover America as people in the Twentieth Century fantasized it was, but for the most part, wasn’t.  The corn is not only as high as an elephant’s eye, it’s thick as an elephant’s dick; there is no trash by the side of the road and the embankments look like somebody mowed them with a Norelco.  There are no dead trees among the verdant forests between the croplands and even the swamps look wholesome—like you could drink the water.  They don’t have truck stops, they have Service Plazas. There are towns called Elyria and Sugar Bush Knolls filled with Cracker Barrels and Hampton Inns and Farmer’s Insurance outlets.  There are rivers called the Vermilion.

Problem is, genuine foot-stomping, audience-testifying, melody-disjunct Gospel music doesn’t come from fat white people or rivers named the Vermillion; it comes from fat black people and creeks named Possum like the one Rosetta Tharpe grew up near.

But they don’t allow real Gospel on the Ohio Turnpike soundtrack; in fact, the only black people you hear at all on Amen FM at all are safe, well-behaved ones like Nat King Cole.

Still, the Turnpike I take, it being the shortest path between Point Michigan and Point Finger Lakes, among the most intriguing wine regions in the country—one that is currently battening down the hatches against a publicity shitstorm, largely self-orchestrated.

With this book, I am not only contributing to the hoopla, I’m the exact guy the Finger Lakes Tourism Alliance is targeting:  My last foray through Northern Michigan was a personal spotlight on wine country with similar terroir—combined climate and geography—nearly identical varietal focus and winemakers displaying  the same pioneering viticultural spirit.

I couldn’t help contrasting the two if I tried, and I have no wish to try.   There are 600 miles between Northern Michigan and New York’s Finger Lakes, roughly the distance between Traverse City and Des Moines, Iowa.  Consider that there are  millions of square miles of heartland between them—some of the most agriculturally-friendly turf on the planet.  What makes both Northern Michigan and Finger Lakes nearly perfect sanctuaries for specific vinifera grapes—Riesling , for example—without there being countless similar sanctuaries in between?

Or is it like the psychotropics in a bowl of marijuana?  Is there a potential buzz squirreled away in a million square miles of something else growing wild, only nobody ever thought to fire any up?  Are there plenty of Riesling resorts between Traverse City, MI and Ithaca, NY, but nobody ever thought to plant a vine? 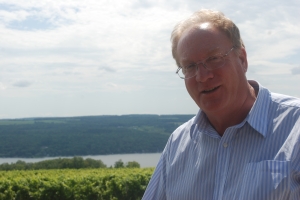 That’s one of the things I hope to learn from the two hundred or so wineries striping the slopes of the  Finger Lakes, from the brain trust at Cornell University’s  Cornell-Geneva Grapevine Breeding and Genetics Program, from Fred Frank—grandson of the man who essentially jump-started the whole vinifera industry on the East Coast in 1957—a mission that Thomas Jefferson tried and failed at  two hundred years before.

But first I need to get there, and that requires a Norman Rockwell small-town criss-cross through Plumpland—plump fields, plump municipalities, plump cops in neat, Mayberry-esque trooper uniforms pulling over plump citizens who will now be ticketed in addition to paying to drive the turnpike.

Meanwhile, AMEN FM has switched format, and now, some born-again Evangelist named Todd is walking us through his personal journey to Christ—evidently, in his formative years he was addicted to (his words) ‘the lies of the Budweiser, the Playboy and the MTV’ which cost his brother Kip his life in a drunk driving accident.

Ever notice that plump white people in the Midwest name tend to name their plump white tykes Todd and Kip?  I have. Well, this would be a journey to see what a Ukrainian named Konstantin brought to Todd ‘n’ Kip Country in the middle of the last century when he came to the Finger Lakes and planted 60 vinifera varietals despite the naysayers and cynics and doubting Kip-Todds who said that it couldn’t be done.  If Konstantin Frank’s name appears with regularity in the following pages, it is because the whole Finger Lakes phenomenon  owes him its eternal fealty.

The rest is a hearty thumbs up from a diehard Michigan boy to the many faces and many digits of Finger Lakes.