Alemany i Corrio: Fusion in Collusion

What do you get when you mix a Frenchman trained in Dijon with a Spaniard from Vilafranca del Penedès?

Alemany i Corrio, that’s what—whose Sot Lefriec is dubbed either a garagiste masterpiece or a jewel of the Penedès, depending on your source. 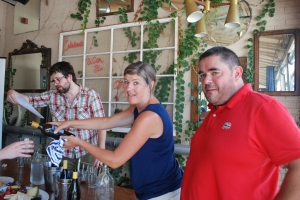 Irene and Laurent, in that order.  Forget the dweeb in the background.

I hung around with Irene Alemany and Laurent Corrio for a bit last week as they unveiled new releases from their winery in the Alt Penedès—a Catalonian subzone responsible for some of the region’s greatest wine.  The fact that some in the Spanish press have labeled Sot Lefriec a benchmark for the area is, therefore, hefty praise indeed.

An hour south of Barcelona, the Alt Penedès is a blend of sheltered valleys and medieval villages; the terrain is rugged, the grape yields are low and subsequently, the wines are remarkably concentrated.

That concentration is a hallmark of the trio that Irene and Laurent poured—and they showed well despite being served outdoors during a heat wave north of 90 ° and humidity like rain pouring down on a sunny day. A blustery red with massive shoulders and an oaken spine is not really ideal in this weather—the tannins are exaggerated and the alcohol seems more intense.

But big, beefy Laurent—he’s a wise man—chilled his reds to the precise temperature for optimal appreciation, in this case, about thirty degrees below ambient.

First, the white, which has a name to rival the best of any wine-name ever, Principia Mathematica, named not for Isaac Newton’s rather boring tome, but for gravel-voiced Àlex Torío’s experimental music.  Both the album Principia Mathematica and the wine were first released in the same year, 2010.

This was the 2013 vintage ($26), and showcase an Alemany i Corrio cultural union, a principia Burgundia: It’s made with a single varietal, Xarel-Lo.  Most wines from the Penedès, home to Cava, and in most of Spain, rely on blends; in Burgundy,  the glories of Chardonnay or Pinot Noir perform solos on center stage.

The wine opens in an aromatic blast of lee-scents, the result (perhaps) of Laurent avoiding another French technique, bâtonnage, in which the dead yeast cells and organic matter from the grapes are stirred up in wine that is barrel-aging.  Among some winemakers, it’s a method sworn by, and among others, it is avoided as introducing unwelcome oxygen and inducing off-odors while blurring terroir.

Laurent and Irene are ‘others’.  Principia Mathematica also kicks forth an earthy minerality and a bright whiff of lemon backed by fennel and toast, leading into a palate both creamy and crisp.  The wine is dry, but there are hints of sweetness huddling within, honey and ripe fig.  There is also a slight note of sulphur; acids are restrained and an appealing nuttiness carries through from beginning to end.

Pas Curtei (2011; $26) is another example of France meets Spain synergy—the blend here is Cabernet Sauvignon and Merlot shored up with Carignan—a typical Bordeaux line-up.  The juice naps for 14 months in French barrels of varying age and wakes up to find itself compared (favorably) to a Saint-Émilion.  Like some of the more aggressive wines from that appellation, Pas Curtei struck me as too young to consume quite yet, with its striking boldness and rich plum and black raspberry intensity still boxed-in with tannins.

A softer mouthfeel, of course, is a trademark of the great estates of Saint-Émilion, and the silkiness associated with, say, a Château Cheval Blanc or an Angélus, can easily be overshadowed. 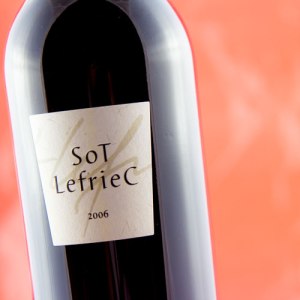 Irene and Laurent’s top cuvée, Sot Lefriec (2006; $71) is much easier to mistake for a upper-end Right Bank Bordeaux.  The merlot content is higher, fully half of the blend, and the mouth-parching oak has had enough time to settle into the body of the wine, adding accent, not attitude; it supports rather than overtakes.  There is a lovely focus to the wine, which is rich and earthy, with some barn-scents emerging behind the extracted fresh black cherries and licorice. There’s a lushness to the fruit that avoids being jammy; the finish is long, complex, and nicely balanced with acid, fruit and wood.

‘Lefriec’ is Laurent’s mother’s name, while the grapes that go into the bottle were planted by Irene’s grandfather.  This potent alloy—family and culture and varietals and tradition—has made the couple rising stars in a galaxy studded with some fascinating constellations.