Jack Off All Wines, Master Of None

The titular pun is ‘me all over’—as immature as sniggering at the word ‘titular’.

From time to time, of course—snarky, sarkie satirical sibilance aside—those of us whose lowly role in this veil of tears and sin is wine critiquery (not wine mastery) may pause in our daily toil to ponder some odd, seemingly unsupportable statement made by one of our betters.

In this case, our better being Bob Campbell, MW, who led off a recent blog with this declarative:

For starters, I would. But then again, I’ve always been among the few, the brave, the contrary.

But then again again, I do not presume to have mastered wine to the same mastery level as a wine master like Bob.

So, when Campbell, MW, says that ‘few people would argue’, I assume he means that few people would dare argue, because if my sado-masochistic bondage fetish is actually a microcosm of reality—and I see no reason to assume that it isn’t—we are all either Masters or Slaves in a consensual, structured authority-exchange relationship, and if we don’t wear the MW after our name, we might as well attach a sheepish, submissive ‘SW’ to indicate our subjugation and obedience.

Unless one is into ménages à trois, in which case, we have crossed into kink territory that likely has its own set of rules, and thus deserves its own wine column.

So, back to the Bob blog.

Not ‘arguing’, promise. But it occurs to me that Chateau d’Yquem, which contains neither Chardonnay nor Riesling, has reeled in perfect Parker scores for five vintages—the latest 2009—but it also occurs to me that Parker has a ‘JR’ after his name, not an ‘MW’.

Victoria Moore’s 2014 year-end ten recommendations in The Telegraph does indeed include a Chardonnay and a Riesling (one each), along with eight wines that are neither.  Her interesting list contained a Verdicchio,a Picpoul, a Malagousia, a Gros manseng, an Albariño, a Chenin blanc, a Pinot bianco and a Sauvignon blanc.

She may be no Master of Wine, but Moore is always a mistress of not thinking like every other wine geek.

Decanter’s ‘Top 100 Wines To Try Before You Die’ is considerably less imaginative (#1 = 1945 Château Mouton-Rothschild = yawn), but the top ten is no more Chard/Riesling heavy than Victoria Moore’s.   In fact, there’s one Chardonnay, 1978 Domaine de la Romanée-Conti Montrachet (more yawn), and no Rieslings, but coming in at #4, above 1962 Penfolds Bin 60A and the Montrachet is our old pal d’Yquem 1921, an  equal blend of Sémillon and Sauvignon blanc.

Master Bob seems to be echoing the current trendy scenester sentiment; that is, that Chardonnay—once maligned by the Anything But Chardonnay hipster-dipster crowd (which nobody wants to belong to)—deserves some sort of a renaissance.

Problem is, then, as now, supermarket shelves are top-heavy with dull, mute, often sweet Chardonnays that people came to enjoy and see—since it wasn’t Blue Nun or jugs of Paisano—as sort of sophisticated. And so, in the original anti-Chardonnay movement (like the Merlot mudslingers who traipsed behind that awful flick Sideways like camp whores), it became sort of campy hip to hate the wines that the lesser hip considered ‘their’ hip.  Of course, Bob is now coming across as high-camp hip, where you decide you actually love what regular campy hip people think is non-hip.  Thus life becomes an ever expanding/contracting continuum of hippery and anti-hippery where everyone jockies for position and changes their minds while trying to crest the wave of assuming that whatever somebody thought was hip ten minutes ago cannot possibly be hip now.

And trust me, droogies, since in that cycle you want to come out on top, stick with me and I’ll see that you get there. 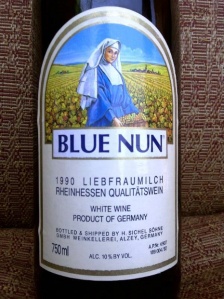 ‘Jack of tirades, master of Nun.’

Likewise Riesling.  For a generation Reisling was pooh-poohed by cognoscenti-ish wannabes as sweet and simple, thanks mostly to the infusion of sweet, simple sugar-water that flooded the late-last-century market disguised as Riesling.  Because the grape was then so universally associated with Germany, it was assumed by American consumers that everything that came out of Germany, including kitschy Liebfraumilch, must be some incarnation of the grape.  In fact, these wines were primarily Sylvaner or Müller-Thurgau, and even today, the Riesling that does make it into Black Tower or Goldener Oktober is of the quality you’d expect in something mass-produced for a demographic that won’t spend more than six bucks on a bottle of wine.

Now—as penduli are wont to do—the pendulum has swung too far in the other direction, and people like Stuart Piggott, who I respect (when he’s not referring to himself as ‘a prophet in the wilderness’) has taken the hyperbolic claptrap to an interstellar extreme with ‘The Best White Wine on Earth: The Riesling Story’, more or less breaking the first of his own educational imperatives, ‘The Five Commandments of Wine’:  ‘A wine is as good or bad as it tastes and smells to you.’

That’s a bit like rewriting Moses’ First Commandment as, ‘I am the Lord, Thy God, and thou shalt have no other gods before me—except if you don’t like me, in which case, go with one of those badass Nordic deities or that bloodthirsty Babalu that even Ricky Ricardo is afraid of.’

Look, Riesling makes some excellent wine, especially when all the stars align a few times a century; no credible wine writer would say otherwise.  Chardonnay too, provided you have the requisite Goldilocks conditions, which basically nobody does.  Otherwise, these varietals, which are not particularly difficult to grow, produce oceans of forgettable wine almost everywhere they’re planted, with a few pockets—Côte de Beaune, Rheingau, Sonoma, Finger Lakes—as the exceptions to prove the rule.

Of course, you can make the same claim about Chenin blanc—and devotees of Domaine Huët Cuvée Constance Vouvray do.   Try telling a Condrieu-aholic that the two hundred dollars he just spent on  Château-Grillet 2012 would have been better spent in Walla Walla or Central Hawke’s Bay.  And nobody with any number of letters after their name, MW, MS, MD, Ph.D, DScPT or OB/GYN, tells a Sauternes-o-phile that the finest white wine in the world is missing a ‘Château’ in front of its name.

Like, one can be argued and the other can’t.

‘Okay, argue-break is over; back to the lower forty.’  – Chris Kassel, SW

4 Responses to Jack Off All Wines, Master Of None