The Brine In Wine Is Mainly In The Mind

Or so the scholars tell me.  But I’m not buying it—not for a second.

On the other hand, whenever I listen to a conch (which rhymes with ‘ponch’, not ‘honk’, damn it) I believe I’m actually hearing the ocean, not some poindexter Stephen Hawking phenomenon where the noise of the surrounding environment resonates within the shell.

Which brings us to brine in wine: Sometimes, tasting notes are about suspending didactics and embracing phantasmagoria.

When snorting and scribbling, the primordial challenge is to find esoteric—but nonetheless accurate—nuances in wine; it’s fun, serves as a sort of mnemonic device for remembering each one and, above all, keeps us from sounding like derivative saps when the words pass to readers.

What do all these wines have in common?  Bingo: They’re from vineyards that rely on the meliorating effects of salty ocean breezes.

It becomes easy enough to make the physiological connection:  Why shouldn’t grapes grown in these vineyards pick up the same flavors that we can smell while standing in them?  Couldn’t some of the volatile compounds that make up sea smells wind up in the finished product?  Shouldn’t these chemical compounds be in seaside soils simply by proximity, and thus, end up osmosisifying a path into the wine?

According to smartypants wine writer/plant doctor Jamie Goode: “…the source of matchstick/mineral character is most likely a volatile sulfur compound produced during fermentation by yeasts. Volatile sulfur compounds are responsible for the wine fault known as ‘reduction’, and what we have here is a classic example of a compound that at one level is complexing and another is a fault.” 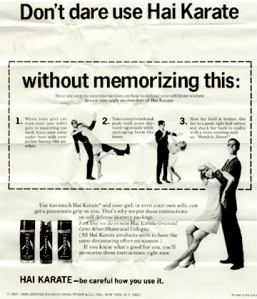 Not sure I can define ‘complexing’, but guess what ends up being the primary aroma in ocean smell?  Dimethyl sulfide—a volatile sulphur compound—produced in large part by bacteria that eat dying plankton.  And the next most common ‘beach odor’ is caused by seaweed pheromones.  Hand before God; when we sniff at a bracing wind blowing in off the surf, we’re smelling kelp Hai Karate.

The third identifiable, isolatable smell you detect when you put a conch shell filled with sea water up to your nose comes from bromophenols—a class of organic compounds produced by marine algae.  In small doses, they smell like oyster shells and when concentrated, like iodine.

Both of these scents appear may appear in wine, but, like the sulfides, they are not the result of a maritime climate.  According to Ribéreau-Gayon’s 1982 tome ‘The Handbook of Wine: The Chemistry of Wine Stabilization and Treatment’, the fungus Apergillis niger may affect grapes during damp seasons and cause skin phenolic transformations that impart the distinct tang of iodine to the wine. Other winemakers blame iodine-based sterilizer that may not have been completely rinsed from wine processing equipment.

And in any case, the brine smells I pick up from certain white wines  come across more mineral than plant or animal; they are distinctly reminiscent of the saltiness in the air when you stand by the shore.

But again my senses seem to be thwarted by science: Beside the fact that even if vine roots could pick up sodium chloride ions, salt in the soil dooms the productivity of a vineyard and great lengths are taken to avoid it or flush it out

According to Olivier Humbrecht—winemaker of the great land-locked estate in Alsace—what I’m noting is not saltiness at all.  He says, “It is the fraction on the palate that makes the wine taste more saline or salty. High acids or high tannins do not mean that the wine has lots of minerality.”

File ‘fraction on the palate’ with ‘complexing’ in WTF? wine-writer lexiconology, but French critic Michel Bettane seems to echo the salt-free sentiment: “A wine marked by salty undertones often are white wines rich in calcium and magnesium, as many mineral waters are.”

The wine that in this case launched a thousand words was a field blend from the highly regarded Corsican domaine of Comte Abbatucci; it is made from Vermentino, Biancu gentile, Brustiano, Benovese and Rossala bianca.  Reviews of the vintage from my esteemed colleagues describe it as ‘fresh, pretty wine with wet-rock minerality from the granite soil’ and ‘aromas of ripened yellow and exotic fruits with a touch of maquis fragrances’.

Not sure what ‘maquis fragrances’ are, but I’m sure they are quite complexing to the palate fractions.

Well, what I smelled was good ol’ blow-the-man-down, yo-ho-ho, Neptune-approved ocean spray, more strongly that I recall having snorted out of any tulip or conch shell ever.  It was like nosing a fresh oyster, which is a fine thing in a freshly shucked Wellfleet, but  sort of head-scratching in a Vermentino.

But, better palates that mine found maquis and exotic fruits in the pricey potable, so the lesson learned here is simple, my droogies:

Take my tasting notes with a grain of salt.

This entry was posted in GENERAL and tagged brine in wine. Bookmark the permalink.