Forget ‘Wine With Chocolate’; What Wine Goes With Those Cute Li’l Candy Hearts That Say ‘Blow Me’?

One of the reasons I am a low-paid blogger instead of a highly-paid critic for The Daily Planet—a great metropolitan newspaper—is that I don’t do obligatory. 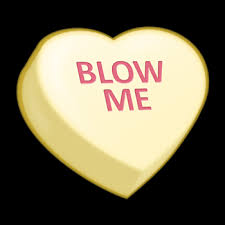 Obligatory wine columns preceding holidays are, in the minds of many editors, pablum for a proletarian, pre-programmed populi.  They insist upon running them whether or not the conclusions drawn by dutiful scribes are, like the holidays they precede, ersatz or bonafide.  Simply having the words ‘New Year’s Eve’, ‘Halloween’ or (in this case) ‘Valentine’s Day’ in the attention-grabbing headline is sufficient bait for snuffling lemmings drooling at the edge of a literary snare.

Some wine writers cave at the first withering glare from Perry White across the city room; others (apparently) like Eric Asimov build a little cork fort in their perceived wilderness and huddle inside defiantly until the savage advertisers show up in war paint and overrun the place.

I single out Herr Asimov only because, in his recent column ‘Wine and Chocolate Pairings for Valentine’s Day’,  he maintains that he’s hitherto resisted overtures to write such insipid twaddle with the same sort of tenacity that Winston Smith used to not send a dozen long-stem roses and a Whitman Sampler to Big Brother every February 14th.

Like our dystopian insubordinate, a short stay inside The New York Times’ infamous editorial Room 101 was evidently sufficient to make Asimov see the champers ’n’ chocolate light, and, in a statement no less powerful than Smith’s final victory over himself, Asimov now claims:

See, the problem is, Eric, most of us already knew that. The question (I’d hoped) wasn’t whether Port goes with Hershey’s Kisses or Malmsey with Mars Bars, but whether one wants to maintain one’s street cred at a great metropolitan newspaper, or instead, re-warm the same goddamn tripe already covered by every keyboard-pecking plonk-puppy from Oceana to Eastasia.

Let’s Re-Think the Whole Throbbing Mess, Shall We…?

Fellow bloglodytes: If you must write a Valentine’s Day wine column, I’m in favor of raising the creativity bar on themes. Unless your Food Page is underwritten by Godiva or Cadbury, I see no compelling reason that ‘Wine and Chocolate Pairings for Valentine’s Day’ has to be the best you can come up with year after year after year, particularly since a recent study by the National Institute of Health indicates that the only reason men buy women chocolate on Valentine’s Day is because they’re too lazy to think of anything else.

Meanwhile, a corollary study by the NIH points to the only reason that wine writers keep repeating themselves about Niepoort and Nestlé year after year after year:

They’re too lazy to think of anything else.

Alrighty then; let’s get this  penis party started.  I’ll prime the engine with a quartet of dat’s wha I’m talkin bout and will expect those of you fledgling hacks who suckle my teat of free advice like  piglets at a sow’s udder to go forth and multiply, idea-wise.

Begin, for example, with the underlying biology behind food/wine pairings.  It is yin and yang; the mouth is a somatosensory organ separated from the gonads by a measly couple of feet and, as you notice from the illustration, yin and yang look exactly like the number 69, so if you have a yen for her ying yang you should yank out the yen and spend it thusly:

Pink is a dainty, decadent hue, both posies and pudenda; whether that sugary, bite-sized vascular organ quips, ‘I Want 2B Your Tampon’ or ‘Spread ‘Em’, the perfect foil for VD’s favorite processed sugar and cochineal-scale-insects-boiled-in-ammonia confection is ‘Sex Brut Rosé from the bondage dungeons cellars of M. Lawrence.  The molecular compound beta-ionone in the candy interacts with the estrogen-like effervescence in the wine, producing a sensory bridge from booth to boudoir, guaranteeing that the least virile and undesirable man on the planet will at least get a chance to snoop around her underwear hamper before being asked to leave.

Dismembering live humans and as a show of affection consuming still-beating hearts has been passé since Tezcatlipoca was in office, but much as the wee ones sing ‘Ring around the rosie’ as a macabre nod to bubonic plague, so may we prepare for our intended connubial conquest by serving her a roasted three-pound grass-fed beef heart accompanied by a hearty tankard of Egri Bikavér Hungarian ‘Bull’s Blood’ wine.  And when time comes for whispering sweet nothings in her ear, try the mushy Nahua love poem ‘Canpa Moyollo’:

‘Where is your heart?

You give your heart to each thing in turn.

Carrying, you do not carry it,

You destroy your heart on earth.’

Wine For When Bill Cosby is a No-Show

If both the above techniques de séduction backfire embarrassingly in your face, fret not; D.I.Y. Spanish Fly can be made with a few common household items you probably have lying around the kitchen.

Mix together in a blender 2 parts of frozen strawberries and blueberries, 1 part each of pomegranate juice, hamster cage cedar shavings, non-fat cottage cheese and a banana.  Add a bottle of Marqués de Murrieta Castillo Ygay Gran Reserva Especial 2007 and five microtabs of ‘Shiva’ blotter acid.  Blend until smooth and creamy and administer to your date at half hour intervals.

Wine to Wash Down Viagra

And now, the moment you have been anticipating since you were fifteen years old; consummation. The actual act of physical love. Peanut butter with the chocolate, making the beast with two backs, Caesar laying his sword to bed, doing your duty for the party.  If nerves creep up like Gollum at the precipice of Mount Doom, even though you walk in the valley of the shadow of performance anxiety, fear no flaccidity; Pfizer is with thee and thy rod and shaft shall function so long as you pop the little blue pill and a stiff swig of Chkhaveri 2013.

See how easy that was?  Now, run along and develop your own unique take on Valentine’s Day wine columns, droogies.  No wine and chocolate.  No Champagne, no Port.  Nothing but blood and lust-fire.

This entry was posted in GENERAL and tagged wines for valentine's day. Bookmark the permalink.