I won’t tarry o’erlong on what the Chileans have done for Carmenère—roughly on par with what Blue Book Modeling Agency did for Norma Jeane Mortenson and Robert Johnson did for a beat-up six string.

Enough to say that people who appreciate wine—appreciate it for its savor and flavor rather than its fable and label—understand the nonpareil value that vinous Chile brings to the table.

I’m reminded of a culinary arts college near my house that runs an on-campus restaurant where you can get remarkable meals prepared by budding superstars for around the same price as a bottle of Carmen Gran Reserva Carmenère 2011, $16.  The unspoken message behind your American Harvest tab and your Carmen bill is the same:

‘One of these days, just as soon as everyone figures out how good this stuff really is you’ll be paying a lot more it.’ 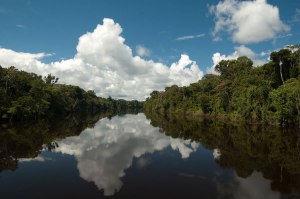 Not that some Chilean winemakers haven’t already begun to jack up prices, and bully for them: We’re material sots living in a material world.  To some extent, wines like the titular Carmen Carmenère are like Amazon rain forest travel packages themed ‘This may be your last chance to experience one of the world’s great wonders before we…’

For the wine, merely replace ‘…destroy it’ with ‘…raise the price.’

Carmen is the quintessential Chilean winery, 160 years old and stronger than ever.  It’s not only the oldest commercial winery in Chile, it’s also the one credited with ‘discovering’ Carmenère’s potential in this narrow, fertile strip of South America, and nobody has done it better since.  That’s arguable opinion, of course, like (if you can stomach another analogy) you could argue that no one who does a Van Morrison cover can possibly do it better than the original.

It all depends on what you’re after.

For me, the full Monty is placed on bawdy display with Carmen’s 2011 Gran Reserva, which originates in the dry-farmed east face of the Colchagua coastal mountains, and in particular from the sub-appellations of Lolol and Marchigue.

A key vinification technique that seems vital to Carmenère’s success in Chile is a long, cold soak, after crushing but before before fermentation.  This is achieved by storing the grapes in stainless tanks at around 40ºF for a week, allowing the full extraction of color and flavor in an aqueous environment without sucking out too much tannin. Carmenère’s tannins are late ripeners and are often ‘green’ tasting if the grapes are picked too early; macerating the wine after it has fermented tends to bring out unpleasant vegetable notes.

Tannins in general must be kept to a certain judicious minimum in  Carmenère, and unlike a lot of oak-heavy New World wines, this one was only 60% barrel-aged and for less than a year.

The resulting sample greets you with a beautiful puff of fruit and spice; there’s blackberry jelly up front, pomegranate and chocolate just behind, with maybe a touch of paprika throughout; the cold soak leaves its imprint in a huge, juicy nose.  The wine settles into deep, mouth-coating floods of berries and plums with overtones of sweet mocha and a round, almost viscous mouthfeel. As promised, the tannins are beautifully balanced; the pucker quotient is perfectly integrated, showing up as dryness on the upper lip but not intruding into the freshness of the fruit.  And it is these bright, sharp, precise flavors are what linger on the palate for a long, luxurious time.

I don’t think you’ll find another Carmenère from the appellation that can match this package in terms of price and sumptuousness, and if you disagree, bring it on:  I’m all nose ‘n’ palate.

This entry was posted in CHILE and tagged Carmen Winery, Carmenere. Bookmark the permalink.