Last Chance To Secure Seats At The ‘Writers Write; Everyone Else Attends Symposiums’ Symposium

Seeking out small pockets of serious humor in a serious world preoccupied with ebola, ISIS and Tom Brady’s balls is a daunting task, but at the close of another nihilistic day, nothing is funnier than people who take themselves too seriously.

So, when I received an invitation to attend The Symposium for Professional Wine Writers in Napa on February 17-20, I recognized a rare opportunity. Not to attend, which would cost me $695 of non-refundable alco-dollars (not to mention another $700 in airline fees) and allow me four full days (as promised) to ‘explore themes prevalent in contemporary wine writing and network with peers in an unmatched career enrichment opportunity’.

But rather, to make merry over the sheer ego-sodden ludicrosity of anyone who takes this shit… seriously.

There, I’ve Said It…

In terms of my bucket-list priorities, this symposium ranks slightly above the Finding a Mormon Identity through Activism Conference in Provo this June and just below a four-day stint inside maximum security at Thailand’s Bang Kwang Prison. 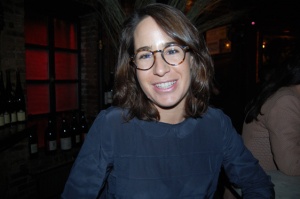 Underneath that blouse, Talia Baiocchi is like, totally topless.

On the plus side, unlike in Bang Kwang, the wine symposium will not chain you to the wall with napinya shackles; on the other hand, I can’t think of anything else that would serve as impetus to sit through an entire Story Pitching, Speed-Dating Style lecture, even if host Talia Baiocchi volunteered to do it topless.

Other scheduled harangues include Eric Asimov explaining why Recognition of One’s Preferences are Vital for Wine Writers, which essentially means you’ll learn that before writing about wine you should decide if you like writing about wine, and Richard Bradley (Worth magazine) outlining What Luxury/Lifestyle Editors Don’t Want, for which you could save yourself an hour and spend ten minutes reading anything about wine I’ve ever written, giving you a pretty good idea.

These are called ‘breakout sessions’, bringing the prison metaphor around full circle.

Now, if I have offended any symposium-giddy peers, advertently or otherwise, mea maxima culpa³ and allow me a moment of self-mortification with a hundred lashes from a cat o’ nine tails.

Okay, so let’s suppose you really, really, really want to attend the symposium, but don’t quite fall into the exclusive category required of you to do so; that is, the status of being a ‘professional’.  Not to worry!  According to my peer Alder Yarrow, this is elitist-ese for ‘someone has paid you to write about wine at some point.’

So, this leaves you with two options:

1) Send me an email with the words ‘wine be good’ in the message box and I’ll put a dollar in your PayPal account.  You’re now a pro and together we’ll descend upon the Meadowood Napa Valley spa/conference center as a flash mob and disrupt the workshops and loot the wine cellar and I’ll ask Yarrow to send me a finder’s fee for recommending you.

Where we’ll be staying

2) Attend my symposium, the Writers Write; Everyone Else Attends Symposiums Symposium to be held that same weekend in an abandoned tire-shredding warehouse in the Cass Corridor in downtown Detroit.  Granted, the milieu is not as resorty or spa-ish as Meadowood, but I offer an all-day pass to the Coney truck on 2nd and Selden and our breakout sessions include a trip to a crack house for the lecture How Not to Write About Wine Like a Pussy.

We will also have panel discussions on such topical themes as You Will Never Make a Nickel as a Wine Writer and Do Yourself a Favor and Go Back To Law School and Surefire Ways to Beat a Breathalyzer After an Extensive Tasting.

We also provide urinals custom-designed to make it easier for you to network with peers.

If that hasn’t dissuaded you, symposium pre-registration fee is $6.95, which may sound like a lot, but note that after the closing ceremony we will go on an all-night scrapping expedition through the neighborhood where there is enough remaining copper pipe, insulated wire, stainless steel cabinets, etc. to cover out-of-pocket expenses.

And it will secure you a reserved spot on our upcoming field trip to Kwang Dong prison where we’ll engage in a hands-on seminar guaranteed to be a more fun, more exciting career enrichment opportunity than the four-day Symposium for Professional Wine Writers:

Four days in the electric chair.

1 Response to Last Chance To Secure Seats At The ‘Writers Write; Everyone Else Attends Symposiums’ Symposium