Dressing For Digressing: Puttin’ On The Shitz

Before we go further, it’s ‘fess up time.  I’m a bit of a bully.  And really, I have been a bit of a bully for my entire life.  I’m told that when I was baptized, I was nonverbally intimidating to Father Domenic and wore a sneer of supercilious hostility as I went wee-wee in the font.  As a child, when my parents wouldn’t buy me an air rifle, I falsely accused them of abuse and giggled when they were jailed. Each year in grade school, I peer-pressured foreign exchange students into eating the classroom goldfish and in high school, I tricked all the special ed children into taking LSD.  On a press junket to South Africa, I pushed Nelson Mandela into a locker, called him gay and gave him a wedgie. These days, I chair an anti-bullying class at my kid’s high school where I take photos of all the fat parents and post them to Facebook with nasty comments.  All the while, I defy amateur psychologists by being strong, popular and self-confident; an A-list winner who is unafraid of failure and has a happy home life. 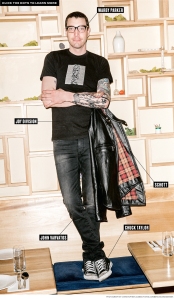 So it should come as no surprise that today, as a wine writer bully, I intend to laugh at sommelier Patrick Cappiello, who posed for Bloomberg Business Week in the ‘What I Wear To Work’ section.

Cappiello is the wine director at some pretentious joint in pretentious NoLita, the pretentiously-named Manhattan neighborhood that’s home to such pretentious butt plugs as Iman, Gabriel Byrne, John Mayer and Moby.  Anyway, as seen in the picture, Cappiello is sporting his ‘casual’ somm uniform that (to my best estimate) set him back around $1200, roughly three times what the formal tux that I wore as a sommelier cost.

Which would be fine if the picture didn’t make him look exactly like the kind of self-important lame-ass twat that cries out to us bullies, like a whine in the wilderness… “Mock me.”

Where to start, huh?  How about at the bottom; then, we can work our way down…

Chuck Taylor shoes are a pretty good metaphor for everything that makes urban hipsters a mass-market disgrace.  Even the most politically correct among us understands that the expensive-hightops fad was the brainchild of poor black ghetto kids who found something culturally iconic and pointless to shoot each other over.  Largely built around Nike’s 1985 ad campaign, Air Jordans had all the cache required: They were idiotically overpriced, endorsed by an NBA Negro and made by poor, Yao Ming-colored ghetto kids in Guangdong, China.  Of course, in 1985, Converse owned the market for namesake basketball-player shoes with their ‘Chuck Taylor All-Stars’, a brand they’d been marketing since 1932 and, at over 600 million pairs (that’s 1200 individual shoes, for any poor ghetto dropout who is wondering), are the most successful basketball shoe in history.  The only problem is, Chuck Taylor was white, so black kids never found anything racially cohesive in wearing overpriced shoes named for a player from an era when, had the NBA existed, wouldn’t have allowed persons-of-color to play even if they were  7′ 6″ like Yao Ming.  So, the only ‘cache’ for a hipster like Patrick Cappiello in wearing overpriced Chuck Taylor’s is irony, and the only thing we hate about hipsters more than their stupid shoes is that they love all things ironic—except for that Alanis Morissette song about irony, which they dislike because, ironically, she misuses the word ‘ironic’.

Designer jeans for men are to ‘cool’ what drag queens are to Victoria’s Secret models, and John Varvatos skinny jeans are pretty much a black hole for everything that bullies like me find intolerable—along with every stitch of anything else sold at Urban Outfitters—even clothing that doesn’t damage iPhone 6 Pluses.  See, these pants are meant to telegraph Cappiello’s laid-back, informal approach to hawking hundred dollar bottles of Muscadet Sèvre et Maine, but to people whose thighs are manly and normal because they do not subsist on organic kale chips and Fred Water in refillable BPA-free bottles that can be upcycled into T-shirts after several uses, they are manifestly uncomfortable, and hence, a joke. 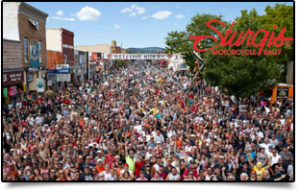 And ain’t Schott the schitt?  Gather round, chirrun, as Uncle Chris offers you crib sheets for your Coolology 101 final exam:  Leather jackets jumped the shark the same moment that Fonzie did.  But let’s offer Mr. Cappiello, who shares Mr. Fonzarelli’s ancestry, the benefit of the doubt: Done correctly, a suitably-weathered leather coat can still be worn to one’s street-cred credit.   I say ‘weathered’ because the entire reason for the existence of black leather jackets is performance—i.e., to protect bikers from road rash when they fall off their motorcycles drunk.  When, instead of wearing it, you hang your brand-new, $700 dollar leather jacket that’s shinier than Ving Rhames skull (with a faux-flannel lining, no less) from the crook of your titanium-wolf’s-head ring-wearing finger as though you might, at any moment, succumb to an inner call to drop your wine gig and ride your Dyna Superglide to Sturgis, where you will promptly be beaten and robbed, you have committed coolness’s equivalent of the My Lai massacre.

You might as well tattoo ‘Fuckwit’ on your forehead.

T-Shirt:  Imagine the most fun and manic band ever, then subtract the fun and divide the manic by bipolar depression and you’ve got Joy Division; the Ingmar Bergman of punk without the Swedish miserablist’s intellectual depth.  Consider that the soul-crushing group disbanded after the lead singer hung himself in his mother’s kitchen and then try to guess why you’d wear a Joy Division t-shirt to work the floor in an upscale restaurant.  Ah—like the band’s name—irony again?

Capping this grisly ensemble is Patrick Cappiello’s head, his wolven, smirking,  pearly-ashen peepers peering from Warby Parker glasses, a brand that pretty much epitomizes why he got swirleed at summer camp. Retro nerd specs on Elvis Costello, who is essentially cool, may work, but retro nerd specs on a genuine nerd do not—they merely magnify the condition.  In fact, a sommelier putting on geek glasses causes an unstoppable, self-sustaining nuclear chain reaction that continues until said somm dissolves entirely into a gloppy crockpot of noob stew.

Note: If this column offended any readers, inadvertently or advertently, be it known that I intend to hold our reader/writer friendship hostage by threatening to write a column about you and the fact that you still wet the bed if you do not laugh out loud right this very minute and instantly ‘like’ and repost this post on the handy tabs given below.

Now, if we have reached an understanding, it’s time for you to bend over and give me your lunch money.

This entry was posted in GENERAL and tagged Patrick Cappiello, Pearls & Ashes, sommelier. Bookmark the permalink.

1 Response to Dressing For Digressing: Puttin’ On The Shitz