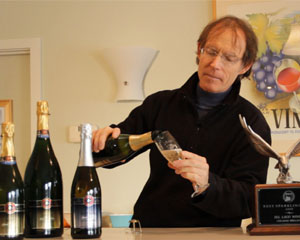 Among Leelanau’s most unique boutiques, Bel Lago is positioned right out of the chute.  For one thing, it is not in the mainstream ‘loop’ of money-shot, photo-op, rich man’s wineries up and down the coast.  For another, it doesn’t even seem to be in wine country.  All the farms on the way in are planted to corn or hay—a few scraggly apple trees, many left to the wild, are the only fruit to be found; the buildings along Lake Shore between Schomberg and Kabot are not slick tasting rooms, but ramshackle, imploding barns with vintage Fords on cinder blocks out front.  Along the fifteen minute drive from Cedar you’ll find the kind of old school agricultural spreads that made Oliver Wendell Douglas cream his Ralph Lauren overalls, and by the time you see the first grape vine, you’re already in Bel Lago’s driveway.

There, leaving your vehicle, you may be greeted by Moses, who is not on premise to part the red sea of pinot noir nor to fetch the Ten Commandments of Tasting Room Etiquette, but to play catch.  He’s Charlie Edson’s boxer and either has a Frisbee permanently between wedged his teeth or Charlie has fitted him with a Ubangi lip disc.  In any case, the dog will trail behind you and nudge you while John pours you a flight of Bel Lago’s finest; Moses doesn’t know from tasting wines, but fortunately, John Hall, manning the tasting room, does.  The Bel Lago line-up contains the familiar, the fantastic and the phantasmagorical, including clones and grape varieties that even wine pros have to rack their brains to recall and classify. 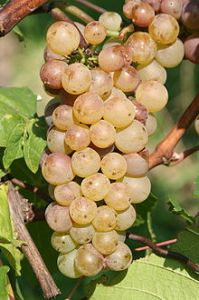 Among these, Charlie Edson’s most snazzy success is auxerrois, a grape which even in its native France is prone to certain colloquial confusion.  In Alsace, it is treated as a blending grape for Crémant and is so often a component of pinot blanc that the name ‘auxerrois’ may be used interchangeably in the vineyards.  Auxerrois is a cousin to chardonnay, part of the direct gouais blanc and pinot noir ancestry, but that doesn’t stop Cahors vignerons from referring to malbec as auxerrois, those in Languedoc-Roussillon for doing the same thing with valdiguié nor those in France’s Moselle (who themselves seem to have pilfered a patronym from Germany) from calling auxerrois ‘chardonnay’.

It’s almost like you need a Ph.D in Vinology to figure this grape out.

Enter Doc Aux: Edson is the Edison of Leelanau 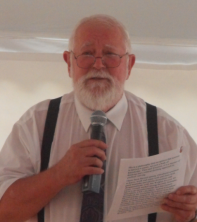 It’s one thing to want to be a farmer—all that land spreadin’ out so far and wide, keep Manhattan just gimme that countryside jazz—it’s quite another to to pursue a doctorate in it. Farmer John, Ph.D has a peculiar ring, right?  Nonetheless, Charlie Edson, who grew up near Muskegon, (where an interest in agriculture is considered normal but an academic obsession with it less so) followed his heart to the soil via the lauded MSU program under the tutelage of Stanley Howell—the professor emeritus who has figured largely in the development of Northern Michigan viticulture.  From there, Edson signed on as a research tech with Missouri State’s viticultural program, spending the next four years at another MSU, but always with his eyes on the Leelanau skies.

“I determined by age eighteen that Leelanau was where I wanted to live, so in Missouri, I saved up vacation days and spent every harvest here.  I had a hobby acre planted with various experiments—including the first Dijon clones planted in Leelanau.”

In 1987, along with his wife Amy Iezzoni and Amy’s folks Domenic and Ruth, he established Bel Lago, the lago being Lake Leelanau and the bel being the view.  As a winemaker, Charlie’s view is equally bellish: Long hang-times, ripe flavors, deal with the potential downside.

“A lot of wine growers up here pick early to avoid rain, but I am willing to take that risk.  Pick early, you’ve capped the ripeness.  If I leave the clusters on the vine and it rains, it takes a few days for the plant to metabolize the water.  If the rain doesn’t stop, I lose, but I have to say, I have been rewarded more times than not.”

And the resulting wines display a broader range of flavors than might otherwise be expected, for reasons that don’t require you to have a doctorate to understand.  Extending grape ripeness is—no pun—a flavor of the month in viticulture across the globe, but in areas where the harvest season is generally hot and dry, excessive sugar accumulation (often at the expense of acidity) can produce wines with aggressive alcohol-by-volume, diluted acids and a somewhat jammy taste profile.  They also tend to be rewarded at competitions by judges who have embraced, and in certain cases created, the ‘hang-time wine’ phenomenon. 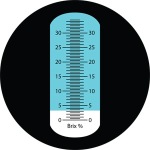 But that does not necessarily hold true in Northern Michigan, where grapes often struggle to hit the minimum concentration of sugar needed to produce table wine; chaptalization—the addition of processed sugar to boost must sweetness and corollary alcohol levels—is not only allowed by Michigan regulation, but in dicey vintages it is often required.  The standardized Brix scale used to measure the sugar content in grapes before fermentation finds that most table wine is harvested between 19 and 25 °Bx, corresponding to ABVs between 10.8%  and 15.1%.  Much above 25 °Bx, without specially engineered yeast strains, the concentration of ethanol begins to kill off yeast cells before they have fermented the must to dryness.  Not only that, but grape mass is pretty much complete at that point, and afterward, measurable sugar accretion is said to be ‘virtual’—meaning that it is the result of dehydration, causing agita among contract growers who sell grapes by weight. 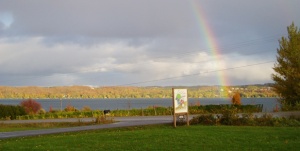 That said, in Michigan’s northernmost wine country overall, the decision to balance hang time with climate concerns is similar to a marathon runner who trains all summer and wants to get the race under her belt before flu season hits.  Achieving °Bx above 25 is a rare occurrence even in top vintages and the degradation of natural acids is as much a plus in Leelanau and Old Mission viticulture as it is a negative in hotter climates; high TA has been an albatross around the neck of vinifera growers virtually from the outset.

So, the balance that Edson seeks to strike is flavor-ripeness, often seen in the browning of grape seeds as well as tasted in volatile aromatic compounds that appear during the final stages of véraison.

According to Dr. Edson, vintage 2014 has struggled a bit with its chemistry final:  “It’s been a mixed-bag harvest, with the hybrids showing great flavors, but for the vinifera, we will have to make necessary adjustments. Chardonnay is low in sugar, high in acid; pinot noir will not be suitable for the ripe, rich style I prefer, so it will be used to make a Brut Rosé; sparkling wine can tolerate the lower pH.”

For the record, an ideal pH for wine is in the range of 3.5, which (on the logarithmic scale used to measure a solution’s ability to donate or accept hydrogen ions) is midway between battery acid and water.

So, for a tasting flight, it may be better to concentrate not on the here and now, and instead, on the there and then:

Starting with a flight of pinot grigio—a name that Edson sticks with despite the wine’s stylistic resemblance to an Alsatian pinot gris more than the crisp, almost herbal wines of Northeast Italy.  It’s a marketing game that wine buyers might play, but wine folks won’t fall for: Bel Lago Pinot Grigio 2012 is gris all the way, creamily luscious and soft in the mouth with aromas of peach and yellow plum leading to an earthy minerality.  The Reserve from the same vintage mingles honey and spice with the ripe stone fruit; a year in neutral oak barrels adds a touch of smoke and enhances an attractive viscosity of the texture.  2013 is a leaner wine, with a floral and citrus bouquet and light flavors of white Bellini peaches and crushed almonds.

I believe that 2012 was the watershed year for gewürztraminer in Leelanau; it was the first harvest in which a handful of wine growers up here were able to harmonize its contrarian faces.  Based on a number of factors, a gewürz may lean toward the flagrantly floral or the markedly musky, and it takes a studied and patient winemaker to help the stars align—one who understands the grape, knows the vineyard’s microclimate and soil composition, is willing to allow the hang time required to develop distinctive varietal character and perhaps most importantly, plants the correct clone for the site.  Edson’s 2012 gewürz shows all the above; it is a heady nectar resplendent with tropical flavors of mango, grapefruit and a bit of lychee with gardenia and honeysuckle on the nose.  But above all, retains an alacrity and elegance that is nearly impossible to achieve when this grape is grown in warmer climates. 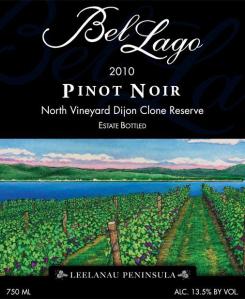 Pinot noir suffers the same fickle finger of fate, and for the same reasons, which is why California produces very few world-class pinots and Louisiana, none.  Northern Michigan, at the far end of the climate spectrum, requires a conspicuously cooperative year to end up anywhere near a fleshy pinot with bragging rights.  2014 may not have been the game-winner, but 2010 sure was.  Doctor Charlie has 32 unique pinot clones under tillage, and I’m not sure what went into Bel Lago Pinot Noir Reserve 2010, but it worked, resulting in one of the finest Michigan incarnations of this notoriously high-maintenance, prima donna grape—the Maria Callas of viticulture—I’ve tried.  Tightly woven at first whiff, the wine opens within a few minutes of air time, displaying soft, smoky black cherry notes, racy cinnamon and a solid core of classic Burgundian forest-floor.

And then there’s auxerrois, a varietal favored by Charlie’s wine-team member Cristin Hosmer and one that has helped to put the grape on America’s homegrown wine map.  He planted it in 1987 and secured a TTB approval in 1998, six years before Adelsheim—Oregon’s auxerrois ambassador and the only other US winery (that I’m aware of) to produce a 100%, stand-alone varietal.

“My original plan was to use it to shore up chardonnay in years when I could get the maturity out of those grapes, but I’ve never had to do that,” Edson maintains. “At three-and-a-half tons per acre, it makes a lovely wine on its own.” 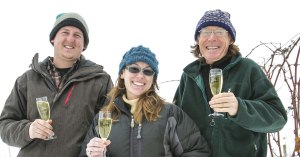 No argument here: Bel Lago Auxerrois 2012 is endowed with energy, showing ripe pineapple and jasmine on the nose and a richly-ingrained creaminess across the palate, due in part to the year it spent sur lie and the neutral oak in which it was aged. Threads of vanilla and fresh fennel run through the body and linger on the finish, the sort of syncopated structure that vaults this wine into the ranks of can’t-miss Leelanau whites.

In fact, tasting through the Bel Lago catalogue, there is a persistent theme running through Doc Aux’s wines: Texture. Even those from lesser vintages, which necessarily run thin and sharp, have an underlying framework; an essential and signature fabric.  He’ll credit hang time; I’ll credit a wine scholar who thinks about a glass of wine wearing a horticulturist’s trifocals, seeing all aspects of its history, from seed to stemware.

In all, for a wine country which seems often attracted to a homogeneous winemaking style, these selections are exactly what the doctor ordered.