There’s a common misconception among you readers that being a wine writer is nothing but free chicks and playing the guitar on the MTV, but I challenge the most cynical of you to explain to me exactly how hauling a heavy case of wine from the hands of the UPS man to the kitchen table is any less ‘blue collar’ than moving microwave ovens and color TVs.

Got you there, huh?

And what’s worse, suppose I unpack my new custom kitchen delivery and discover that it is, in fact, a cheap, pint-sized polystyrene diorama from a 1970s Barbie Dreamhouse set?  Would you laugh at my earring and makeup and call me a faggot?

I certainly hope not.  So, you will presumably empathize with (and not mock) my dilemma, having eagerly torn open the carton in the hope-against-hope that it would contain something wild and wonderful from, say, Domaine de la Romanée-Conti—getting a blister on both thumb and finger if you must know—and discovered instead that it contained a quartet of bottles best described as something Barbie would use to stock her miniature polystyrene wine cellar.

I am under the impression that Barefoot Wine subscribes to some really cheap social media monitor like Hootsuite that alerts them every time they get mentioned in a wine column, and that their shipping department is populated by minimum-wage automatons programmed to send wine samples to any critic that utters their name, regardless of whether or not it’s uttered in vain.  I am led to this conclusion by the fact that I regularly mention Barefoot in the context of everything that sucks about modern, mass-produced, Big Box wine, likening their Modesto production facility to Mordor, comparing their founders Michael Houlihan & Bonnie Harvey to Augusto Pinochet and Pol Pot, their winemaker Jennifer Wall to Ilsa: She Wolf of the SS, referring to Barefoot fans as dysfunctional subhuman vermin who drink like alcoholic eight-year-olds and who are, consequentially, to wine appreciation what an abscessed lateral incisor is to a Hollywood grin. And that’s right before I start relying on hyperbole to make my point.

And still, like clockwork, a week or so after thus calumniating the crapola corporation, I receive via a case of whatever is on latest release.  If you have a better explanation for this anomaly than the one I just offered, I’m all ears—from head down to bare feet.

In any case, the carton I just blisterized my bongo hand tearing open in the hope of finding Burgundy, contained an au contraire: Four bottles of bubbly from the new Barefoot ‘Fusion’ oeuvre:  Berry Fusion, Peach Fusion, Citrus Fusion and Tropical fusion, leaving me in a state of pro-found con-fusion.

Still, being as conscientious as I am contrary, I would feel guilty accepting free wine, even free wine I intend to use to kill the black mold in the shower stall, and not write about it.  So I invited over a trio of folks who I know will drink anything I put in front of them, and we did an honest analysis of Jennifer Wall’s latest foray into Teen Spirit Deodorant wine flavors.

Barefoot Bubbly Berry Fusion:  Before beginning, I searched the weasel words at the bottom of the press release to see if this product was originally called ‘Dingleberry Fusion’ but found instead this descriptor: ‘Sweet and vibrant with flavors of pomagranate [sic], cranberry and juicy plum’.  My tasters agreed with every word except ‘pomegranate’, ‘cranberry’ and ‘juicy plum’, substituting ‘skin infection’, ‘Gowanus Canal water’ and ‘prune that fell down a radiator grate and wasn’t retrieved until after Easter’.  Otherwise, letter perfect.  You go, Jenny! And by go, of course I mean ‘go away’.

Barefoot Bubbly Peach Fusion: ‘Sweet and juicy with flavors of ripe peach and bright honeysuckle with subtle citrus notes’ say the marketing crackerjacks, but the only thing subtle we could find in this exaggerated, overly-carbonated left-hook-to-the-jaw was the creeper nausea that followed it.  This wine screams for a cartoon mascot, because the only demographic that could possibly appreciate it is the juice-box crowd.

Barefoot Bubbly Citrus Fusion: This one, evidently, is ‘Sweet and vibrant with flavors of blood orange, passion fruit and sweet peach,’ which explains in part why it was difficult to nail down the citrus profile they were after—two of their own three descriptors are not members of the citrus family.  Actually, we noted less passion fruit and more motel mattress, less peach than Screech and the blood in the orange tasted like it had clotted and spoiled some time after the police tape went up.

Barefoot Bubbly Tropical Fusion:  The sensory blitzkrieg, the full court press, the part of the battle where you bring in the cavalry and hope for the best.  Alas, it is Little Big Horn in a bottle.  ‘Sweet and vibrant with fresh pineapple, island mango and papaya’ says the PR juggernaut, for some reason making a distinction between a mango grown on an island and a mango grown in a Fresno hot-house, even though the wine contains neither.  In fact, it tastes so aggressively artificial that you presume if the FDA made them list ingredients on the label, they’d need a bigger label. 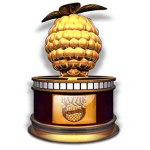 This quartet is indeed plastic wine for a plastic age; the sort of stuff you suppose pairs well with a McDonald’s Happy Meal and reduces wine to an episode topic on Barney & Friends—‘I love wine, wine loves me, we’re all shaking with DT’. Soap boxing this liquid diabetes involves bragging that Barefoot Wine is the ‘Most Awarded’ sparkling wine in California, but you cannot imagine that these awards come from responsible wine judges, unless they were given out in jest, like the Court of Master Sommeliers’ version of the Razzies.

Speaking of which, what an ideal idea for another label!  Three words for you, Jenny Wall:  Golden Raspberry Fusion:  ‘Sweet and juicy with kitschy, low-end  flavors of ripe pabulum, processed regurgitant and Teletubby drool with subtle notes of tacky logo and the sort of body-lotion fragrances Olay used to market to tweens in the ‘90s. ’

That should do it, right?  After that release of radioactive review isotopes, even the most befuddled Public Relations android should realize that I am no longer a good candidate for samples.  No more bubbles for nothin’ and my brix for free.

And the next time the UPS man comes bangin’ on the knocker like a chimpanzee, you can be damn sure what I’ll be singing: