Tony Ciccone: Papa Can Too Preach

Posted on October 7, 2014 by intoxreport

I wonder if when Tony’s kids were small, they used to say, “Papa, tell us the dead cat story again!!”

Actually, you probably know at least one of Tony’s kids—pretty well, too—but  enough about that for now.  I’m of an age to be one of Tony’s kids, and every time I interview him, like a tot on his old man’s knee, I pester him to tell me the dead cat story again.

And every time he tells it, I laugh my culo off. 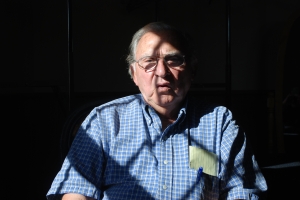 See, when Tony growing up in an Italian enclave in Aliquippa in western Pennsylvania, the six Ciccone boys (known locally as ‘The Zero Brothers’ because their names all ended in an ‘o’) had no sisters and as a result, had to learn all the household chores—ironing, bread making, sewing and so on.  One of young Tony’s jobs was to monitor the wine barrels bubbling away in the cellar, which was a vital gig in any self-respecting do-it-yourself Italian household.  One day, he’s checking the wine and he finds that a neighborhood cat has fallen into a barrel and drowned and he immediately runs to tell his father.  “So take it out,” Silvio—fifty years a mill worker at Jones & Laughlan Steel—insisted.

And Tony claims that they drank it anyway, with no one the wiser.

At 84, Tony (Silvio Jr.) Ciccone has strained and drained many a wine barrel since, and it is fair to say that in the intervening years, his quality restrictions have grown while his pet allowance has shrunk.  He’s now the helmsman of Ciccone Vineyard, an estate-focused winery overlooking West Grand Traverse Bay in the Leelanau Peninsula, producer of (among a host of vinifera and hybrids) Michigan’s only dolcetto. Like the cat from the vat, you can take the Italian out of the enclave, but you can’t… 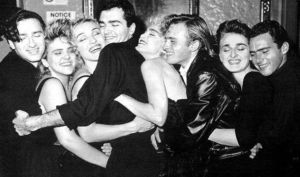 The path that took Tony from his tight knit PA hood to the wilds of Leelanau, felines to grapevines, was a convoluted one.  After high school he joined the Air Force and was stationed in the Aleutian islands—about as far away from the grit and grime and bowling alleys of Western Pennsylvania steel country as could be managed.  In fact, in outlook more than distance, so was Geneva College, rated among the top ten regional colleges in the country by US News & World Report: His degree in physics—for which he is still called ‘The Professor’—was a direction not many sons of mill workers took.  After that, however, Tony went the way of any good Italian kid in the Fifties: He married a Catholic girl named Madonna Louise and began making babies.  Eight in total, of which two—Paula and Mario—are now employed at the vineyard; Paula learning the winemaking ropes and Mario managing the vineyards.  These two, though ever-present and starring in Ciccone Winery: The Next Generation, may not be the Ciccone you know.

Another one of Tony’s babies; the Abrams.

Tony put in his braniac years developing tanks for Chrysler’s defense division, indispensable for the high-priority M1 Abrams tank which remains, to this day, the principal battle tank of the United States Army.  When Iacocca sold the division, Tony transferred to General Dynamics as an electro-optical engineer and began working on guided missiles and other rocket-sciencey projects. Tragically, in the interim, his wife died and left him with a handful of—well, handfuls; a bevy of bambinos with wills as strong as his own.  Ultimately, he married Joan, who remains by his side to this day, forty-eight years later; a foundational figure in the winery.

Joan has been an anchor of whom he cannot speak highly enough.  The going, at times, has been rough.  “This is a passion that requires a well-rounded sort of dedication,” he points out, “because the business parameters of winemaking are quite different than the vineyard parameters. That means competing with the world while maintaining a focus on Michigan wine, and that includes dealing with seasonal disasters like last winter; unfortunately, the bills don’t stop coming in just because the grapes don’t grow.”

The example he gives is as irrefutable as a physics equation: Powdery mildew, a yearly scourge to these valiant vintners on the 45th parallel, needs yearly treatment whether the vine’s fruit sets or not; the same labor and materials are required if it’s boom or bust.

“And 2014 is pretty much a bust,” Tony admits.  “We still have to spend the thousands of dollars to spray, and without fruit, you might as well be spraying the shoulder of the road. But it has to be done. I think you’ll see a lot more wineries for sale up here after the stock from ‘12/’13 is gone; there are just so many slices of the pie the region can handle, and in poor vintages, everybody scrambles for juice, driving prices up.  Not everyone can—or cares to—swing it.” 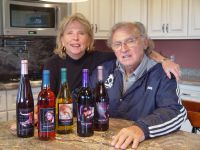 One constant I have noticed about Ciccone wines each time I visit is that, with allowances for vintage variation, they keep getting better and better.  When I first tried Tony’s dolcetto, the vines were infants and the wine showed as simple and acidic; now, it is sleek and refined with a sensational bouquet of cherries and lightly toasted almonds.  Some of this is vine age, of course—older plants with deeper roots tend to make wines that are more complex—but the rest of it is Tony’s earning his physicist’s degree over and over again.  He is a compulsive tinkerer and is never entirely satisfied.  Now, every winemaker makes the same claim, I know, but I have watched the trajectory of this winery’s wares and it has been rationally consistent—not unlike the M1 tank, as it happens, which began development in the mid-Sixties and did not enter U.S. service until 1980.  Slow and steady wins the race, whether its warfare or winefare.

Not that there is any flash or exuberance missing; these wines are easy to enjoy, bright with pure fruit and multi-layered with Michigan terroir.  But, with Tony, there is also growing sense of nostalgia in these wines; his labels and wine names often pay homage to loved ones, living and dead—his mother, his wife, his daughters.

Guido, Rocco, Niello, Guitano and Pietro have gone before and he is the last remaining Zero Brother, but he speaks with obvious pride about his grandson, another Silvio.  Of Paula’s winemaking, he says: “When you get to arguing about process, you know you’ve taught her it right.”

And incidentally, unless you have recently returned from an interstellar vacation, Tony’s eldest daughter (named after her mother Madonna) is probably the kid you know.

As for Tony, the papa who wasn’t supposed to preach, if he’s getting tired of telling The Cat In The Vat, he doesn’t let that particular cat out of the bag.  He looks fondly out of his window, surveying his fourteen acres, and when I ask him if he still makes wine in the cellar he spreads his arms at the the sprawling vineyards and the big red barn beyond and answers, “Sure.  Only now, that’s my cellar.”