Inside The Scatterbrain Of Sean O’Keefe

‘Scatterbrain’ is his word, not mine.  Actually, Sean O’Keefe is one of the most singularly focused winemakers in the twin peninsulas.  Most vintners up here like to say Trockenbeerenauslese; Sean learns the entire German language.  Most Michigan riesling producers read books on Rhein grape cultivation; Sean moves to Germany and lives it.  Ask a riesling fanatic to list their favorite producers, no problem—but Sean actually tracks them down at the source and asks them questions.

On the other hand—to Sean’s scatterbrain point—when I finally caught up with him, it was after two failed attempts earlier in the summer, one in which he forgot he had other things going on and another when he simply forgot to show up.  Even this time, he forgot that he only had an hour before the babysitter had to boogie.

No worries, Scatterbrain—I don’t have a problem cooling my heels inside Traverse City’s insta-heirloom Franklin restaurant with its salvaged, century-old back bar from a honky-tonk in Marquette, where Chefs Myles Anton and Gabe Rodriguez have managed a fanciful, phenomenal fusion of Northern Michigan standbys and global culinary sensibility, and attention to detail is so precise that owner Paul stopped by the table to remind us to tip, presumably because we were taking up table space with a wine tasting and not actually ordering dinner.

Somehow, the etiquette cops among you will be relieved to note, Sean and I managed a fusion of our twin scatterbrain-power and global weren’t-born-yesterday sensibility and remembered to tip.

The table space and view overlooking bustling Front Street in downtown Traverse City was fine; but not so fine as a dive into Sean’s private stock of rieslings while playing Whack-A-Mole with Sean’s rapid-fire delivery, scrawling notes so fast that half of what I write is probably wrong anyway.

In any case, from what I can gather, Sean—who grew up in a communal  wine swell bigger than Grand Traverse Bay—did not begin his winemaking career intending to be a winemaker.  Three reasons for that: First, his father Ed O’Keefe (founder of Chateau Grand Traverse and Old Mission wine in general) already had a winemaker in German-born Bernd Croissant; second, the possibility that Ed, dealing with the economy of the late Eighties might decide to sell the winery was very real; and third, he sort of preferred beer anyway.

But in the early nineties, as Michigan was beginning to find its stride with riesling, Ed opted to keep and grow the business, and as such, he convinced his number-two son (firstborn Ed Jr. wears the title CGT President) to travel to Pfalz for some formal wine training.  There, Sean apprenticed at Weingut Jakob Pfleger while studying viticulture at the nearby wine school in Neustadt, and from there, to the wine college in Geisenheim.

It was an unexpected awakening for Sean, and, in fact, altered the trajectory of his future.

A New Lese on Life

“German wine had been in the doldrums before reunification,” he posits.  “Pretty much, only those in the industry knew who were making the good wines, so when I went, I was able to cherry pick top estates—Georg Breuer, Johannes Leitz, Helmut Dönhoff to see exactly what they were doing to buck the trend toward bulk-produced, tutti-frutti German wines.”

The Seventies and Eighties saw a huge market for these wines, with Blue Nun and Black Tower (which weren’t even made from riesling) dominating the market and selling over two million cases of semi-sweet honeybear drool in the United States every year.

In the meantime, the improvements being made at the Weingut level were largely behind the scenes and employed by winemakers not interested in international mass-marketing.  They were moving away from estery yeasts that produced giant, consumer-pandering aromatics (often at the expense of depth) and had begun to pay requisite attention to the can’t-neglect details needed in chilly Teutonic wineland to produce top-shelf riesling.  In Pfalz—the world’s largest riesling-growing region—this movement was gathering steam just as Sean was arriving, and he saw immediately that the techniques and upgraded mindsets transforming the makers of elite, terroir-driven rieslings could be lessons-learned for Northern Michigan.

“The Germans have lapped everyone else so many times that I wanted to be on the ground floor of this new wave of riesling production.  When I got into the wine business, Northern Michigan had thirty years of experience with riesling.  German traditions go back five centuries.”

Sean describes his winemaking as ‘intuitive’—(“I spent biochemistry class staring out the window”)—and realistic: “Thanks to climate change, Germany is dealing with a whole new set of agricultural parameters.  They no longer have anything that we’d consider a ‘Michigan winter’.  A bad year for them is a good year for us.”

Pondering in ponderous impenetrables at The Franklin

A new generation of climate combined with a new generation of savvy, resulting in revolutionary improvements he saw first-hand while working Pfleger fields and cellars.  When he returned to Old Mission Peninsula. Sean had banked a keen respect for two seemingly opposing approaches (the balance between which was key):  Knowing when to grab the rudder and when to leave nature to take her course.

It turned out that when you followed those precepts, the riesling that came out the business end of the tank was different than a lot of the rieslings Michigan was used to producing—and different from what Michiganders were used to drinking.

“There is a longer time when the fermented wine is left on the lees—first rack’s in January, and this adds a certain savoriness to riesling.  It tends to show more layers and equilibrium and I believe it ages better.”

Also, slightly higher pH makes them more susceptible to bacteria, and occasionally, malolactic fermentation kicks in.  To many riesling producers in the United States, malo is viewed as the kiss of death, but the truth is, not everyone insists on a razor-sharp riesling, and some sniffers find the slightly buttery aromas behind the classic green apple, citrus and mineral nose to be an appealing balance.  In Alsace, for example, primo producer Zind-Humbrecht takes a somewhat less intransigent view of malolactic fermentation (during which sharp malic acid is transformed to softer lactic acid), allowing the wine to do what it needs to do.  Evidence is their ‘Calcaire’—a dry malo-riesling possessed of a startling and delightful velvety texture.

With Sean, any malo is rare and accidental, but neither does he go to chemical means to prevent it—for the most part, the spontaneous onset of malo (rather than the purposeful introduction of Oenococcus oeni cultures) tends to happen only in particularly warm vintages where fruit comes in at pH values above 3.2, and Old Mission Peninsula doesn’t see too much of that.

The wines for which Sean O’Keefe has earned the respect of such riesling groupies as Stuart Pigott and everywine pro Jancis Robinson originated as experimental batches he launched upon his return from the Pfalz.

‘Whole Cluster’ Riesling was one of these dress rehearsals, and it became such a long-run hit that Sean occasionally regrets locking himself into the name.

Anatomy of a grape

When employed in white white production, whole cluster pressing is used to minimize the astringency that sometimes leaves a slightly unpleasant bitterness at the end of a wine—this is in part the result of mechanical destemming, which can actually add more woodiness to the wine by the rather aggressive crushing of the stems.  With whole cluster pressing, intact bunches are slowly (key word) pressed to extract grape juice, but not stem juice.  As the theory goes, by pressing whole clusters in measured, but gentle increments, the berries tend to rupture at the grape end opposite the pedicle (cap stem) and release juice from various physiological zones at different times, and thus, can be controlled.  Rarely are the proanthocyanidins in grape stems, seeds and skins detectable in wines which have been whole-cluster pressed.

That’s the laws of physics and the science of biology; organoleptics tell their own story.  Sean’s Whole Cluster Riesling 2012 fulfills both the promise and the premise—it is soft and supple without any pithy edges; the super-perfumes of other upstate wines are traded for deep scents of citrus, stone and rich, almost creamy peach notes.  It is a beautifully structured, many-layered wine and very Prädikatsweiny in an (ironically) dry, but honeyed and caramelized sugar way.

Lot 49 is another of Sean’s brain children; a subset, he says, of Whole Cluster.  From a new, west-facing Old Mission vineyard situated on what geologists refer to as a ‘drumlin’, the vines undergo three separate ‘sweeps’; about a quarter is picked early, when acids are barbaric, most is picked around the third week of October when the Brix has risen to the low twenties.  Then, a third pass over the vineyard is undertaken in November, when a touch of botrytis may be present. The acidic reserve takes on the concentrated syrup of the late harvest and enjoy, along with the middle three quarters, a long, slow fermentation with plenty of yeast lees contact, adding savory complexity to the wine—actually made from a French riesling clone, Entav-Inra #49.

“Riesling is no fool’s game,” Sean explains about Lot 49; “and my goal is always to unify the layers that develop at various stages of the process.  I use techniques I learned from my German compatriots, included a primary fermentation in  stainless steel, when most of the heat is generated, then a longer, slower hibernation in stücks.  These are German barrels, oak, oval in shape and holding 300 gallons, so that there is not a lot of contact between wine and wood.  This leaves a riesling which has sacrificed a little fruit for structure; it may taste a bit restrained to people used to the juicy-fruit wines you can smell across the room, but a lot of these have their acid bones sticking out—a lot of them come across as margarita mix masquerading as riesling.”

Indeed, Sean avoids all temptation to produce what he refers to as ‘catalogue wines’—wines made from designer yeasts promising specific estery results, flavor-enhancing enzymes, derivatives and fining agents.  He is absolutely in tune with his terroir—which is to say, he is honest about its limitations.  “In Michigan, grapes don’t always ripen uniformly; in 2009, our yields were barely able to skitter over the finish line.  We have narrow parameters and I prefer to work within those, and that means no chaptalizing (adding sugar) and not trying to produce quick wines with a lot of up-front, simplistic appeal on release, but which quickly become vampires in the sunlight and die quick deaths.  My wines are made to age with grace and become more complex—not less complex—in the years after they are bottled.”

It can be a frustrating go, but it’s a struggle that all minimalist winemakers face, especially those in wine country where—as happened in the winter of 2013-2014—the lake effect fails as Lake Michigan freezes and a huge portion of the crop succumbs to winter kill. 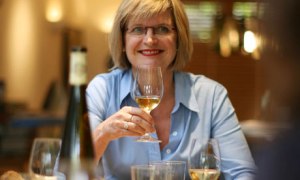 Jancis with a glass of something rieslingy.

But in the really fine years, the dividends of Sean O’Keefe’s level of dedication and integrity pay off.  Take 2010 for example, when all the je ne sais quoi combined with all the sais quoi and produced a wine so lovely that Jancis Robinson OBE, MW named it her February 10, 2012 Wine Of The Week.

Since I dig her writing chops, I’ll quote them verbatim: “I loved the energy in this wine, the slightly funky but extremely interesting nose and the fact that it tasted bone dry (total acidity is 7.8 g/l, pH 3.25) but had such an impressive array of wild-flower aromas. I gave it 17 points out of 20 for what it is worth and would drink it with great pleasure from now for the next five years.”

The only downside is that only 130 cases were made, so if you want some, you may be hard pressed (wine pun) to find any, not at any price—not even at trendy The Franklin, no matter how much you tip.