Can you guess why Mel Practice opted out of a career in medicine?

Of course you can.  Same reason that the Scheister Brothers don’t have a law firm or why Sam ‘n’ Ella don’t open a sushi bar. 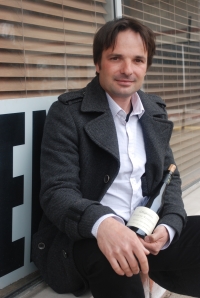 So, when I interviewed Jean-Philippe Bret at The Fine Wine Source last week, the gorilla in the room was not Jean-Philippe, who is scarcely bigger than a lemur,  but the question of why, with a name that is synonymous with cork taint—the bane of winemakers everywhere—he opted into enology.

Turns out that the old adage is proven out once again:  ‘You can’t choose your parents’.

First, The Stage:  Vinzelles is a tiny village in the tail-end of Mâconnais, which is in the tail-end Burgundy, and a close neighbor of the better-known commune of Fuissé.  Both Appellations d’Origine Contrôlée borrow a hyphen from etymology and a sense of identity from the town of Pouilly.  Pouilly-Vinzelles is, by law, white wine made exclusively from chardonnay.  It is ludicrous small, with less than 130 acres planted to grapes (despite the word ‘Vinzelles’ being rooted in the Latin word for vine)—the rough equivalent of a couple of shopping malls.

Next, The Props:  The soil of Pouilly-Vinzelles is primarily limestone and clay, a perfect environment for otherwise easy-to-please chardonnay.  Bret grapes are hand-picked from old vines (40 years, on average) and the brothers produce around 3000 cases per year.  Since 2000, the brothers have been loyal to sustainable agriculture with seven of their wines certified organic.

Now, The Players:  Jean-Philippe is the eldest of a trio of Bret brothers; Jean-Gillaume and Marc-Antoine are the other two, and after hearing about their combined 22 vinous acres in Mâcon-Vinzelles, Pouilly-Vinzelles and Beaujolais-Leynes, I have come to this conclusion: Dudes, you are overdrawn at the hyphen bank and need to cut back on the punctuating. STAT.

Finally, The Curtain-Raiser:  The Bret Brothers currently produce eight wines from their La Soufrandière estate, including a single red, made with gamay and released under the label ‘Beaujolais-Leynes’ to indicate the small, granite-soiled commune nestling at the crossroads of Beaujolais and the Mâconnais.  Despite its Beaujolais assignation, the wine is brooding and earthy, although on a different scale than a Cru Beaujolais—not as complex, perhaps not as elegant; a very old-school red from the area.

That said, the Bret Brothers chardonnays I sampled were universally appealing, and displayed the characteristic freshness and minerality that make whites from this region bracingly delicious.

The Bret house style favors a deep citrus profile, beginning with lemon peel and finishing with white grapefruit.  Oak is restrained, present only as a nod, not a wallop, allowing the terroir’s inherent minerality to hold court.  These wines are sold young and generally consumed young, but the spine of acid suggests that they’d be better at four or five years old.   Wines of this kind develop delightful nuances as the mature—overtones of hazelnut and buttery oatmeal that begin to superimpose themselves above the citrus.

Is Jean-Philippe Bigger Than A Bret Box?

Fair question.   Jean-Philippe is actually larger than even an extremely well-nourished lemur, though not as big as a silver-backed mountain gorilla on a hunger strike.  As the affable heir and spokesman for the house, he takes such jokes in stride (I hope), in part because he is good natured by good nature, and in part because his English is somewhat challenged.  He acknowledged the grotesque irony of his name, and added—to my delight—that the estate, La Soufrandière, translates to ‘sulphur mine’, which would also be an off-putting moniker in the wine world.  In fact, the bon mots flew with such abandon that I dared not—repeat, dared not—ask him if his first name was short for Jean-Phylloxera.