Can ‘Forgiven’ Be Forgiven For Stalking Me Until I Wrote This Review?

“This shit really works!!! I swear by it!!! I can drink all night… Take forgiven… Drink 2 bottles of water before bed… And feel totally refreshed in the morning at work!!!!” says Nichole Dawn January of Peculiar Senior High.

But even more than customer product testimonials, I love girls like Nichole who drink all night while renouncing morals, common sense and capital letters, then still have time to go to bed and get up for work.  Oh, and I love that her alma mater is ‘Peculiar Senior High’.

See, I stalked out sought out girls like Nichole in my own senior high school with the OCD of a UFOologist searching for flying saucers without obvious strings, David Janssen looking for that one-armed psychopath or Diogenes the Cynic looking for an honest man.

Karma is as Karma Does… 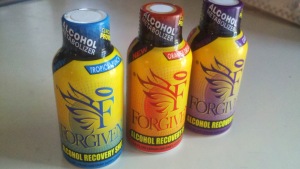 Last month, I received a box of vials containing ‘Forgiven Alcohol Metabolizer’, a product which apparently, really, truly works.  By ‘really, truly works’, of course I mean, it does so according to the customer testimonials, the Forgiven blog and the persistent follow-up emails from the Forgiven reps appearing every morning in my inbox like magical fairy rings in the moonlight, whereof the ewe not bites.

Clearly, they don’t read this column.

I have written about packaged hangover cures in the past—every time Mr. McFeely speedily delivered my liver one, in fact—because I am a  kinder, gentler wine writer who likes to acknowledge free gifts with free press time, even if I proceed to totally make merry over said product like I have with every previous freebie hangover cure with the kind of regularity found in Ex-Lax customer testimonials.

This time, I figured that I would allow discretion to be the better part of valor; that is, until the emails became a nuisance, and I, a world-weary wine writer—one of Agnew’s nattering nabobs of negativism—finally tossed in the towel.

Billing itself as the ‘world’s first and only alcohol metabolizer’, Forgiven’s proprietary formula has been ‘proven’ effective via a 2012 clinical study undertaken by Tari D. Topolski, PhD.   Now, this is an interesting conclusion, because I know from my crack-shot research team that Stanley Goldfarb, PhD— a nephrologist at the University of Pennsylvania’s Perelman School of Medicine—claims that, “There’s nothing you do to remove the alcohol byproducts from the system. They have to be metabolized by your liver, which takes time. There’s no evidence that anything is better than waiting.”

His sentiment is echoed by brethren sawbones Dr. Michael Oshinsky, a neuroscientist at Thomas Jefferson University, who adds,  “Alcohol is a pretty good poison.”

So, I vetted Dr. Tari, currently working as a ‘User Experience Researcher ‘ at Microsoft, and came up with a couple other clinical trials she’d been involved in:

‘How Do Adolescents With Facial Differences Compare With Other Adolescents?’, which the abstract indicates is a study of how teenagers—drunk or sober—react to other  teenagers with supremely fucked-up faces, like those with extra eyes, misshapen craniums, deformed schnozzles or chartreuse-colored skin.  Not sure if any merry-making goes on when kids see John Merrick in Algebra II because I was too cheap to purchase the entire study, but if I was a betting man, I would lay money that the study was undertaken at Peculiar Senior High.

‘Economic Evaluation of Aquatic Exercise for Persons with Osteoarthritis’, which sounded so boring I didn’t even bother with the abstract, but which I assume is a study about how much money you can make selling pool memberships to old people.

So, apparently, Tari is a genuine doctor after all; right up there with Seuss, Pepper and Phil.

Now this is important, because Forgiven is meant to be taken by drunk people, not hung-over people, so complex directions—like if the stuff had to be poured into a spoon, heated over a candle, drawn into a syringe and jacked directly into a vein—it could lead to spillage.  Also, drunk people see double, and if they tried to read complex directions, they would see the directions twice and potentially overdose.

On the downside however, people do not drink to avoid getting drunk, which is exactly what drinking a shot of Forgiven is supposed to do for you; by ‘metabolize’, braniacs like Dr. Teri mean an enzyme-catalyzed chemical reaction which actually helps the body eliminate the booze.  Once the liver has done its God-given duty and cleared your deck of unwelcome euphoria  and replaced it with teeth-gnashing agony, it is too late.

In order for Forgiven to work, you need to take it just after finishing your last drink—the same philosophy under which the Peculiar High School glee club sells prosthetic fingers for deformed bulimics in Algebra II to ram down their throats just after meals, not the following day.

Does Forgiven really, truly work?  I do not know.  Along with Nichole’s customer product testimonial, the Forgiven web site has a whole page dedicated to the dangers of alcohol abuse.

I quote:  “When you consume too much alcohol, the body cannot clear the toxins from your system and as the acetaldehyde builds up, a person goes from being a sappy drunk to a mean drunk and dizziness and nausea set in and it is all downhill from there…” 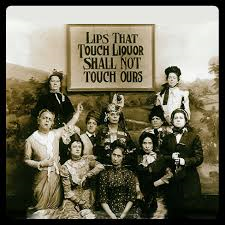 Me, third from left, in drag.

This frightened me so much that I swore off demon rum forever.  I signed the pledge, and somehow, went from being a sappy drunk to being a mean teetotaler.

So, I can expect no more freebies from Forgiven, nor need of any, and hence, no more emails from their aggressive sales team, who are to be forgiven for having failed to be careful for what they wished for.

This entry was posted in GENERAL and tagged Forgiven hangover cure. Bookmark the permalink.