I See Motown, I See France; I Just Bought ‘The Wedding Dance’

Although Detroit was founded as a New France fur trading post, the French themselves left us little by way of culture, and for that, we should probably be grateful.  But they did leave us a bunch of street names.  ‘Detroit’, of course, is derived from le détroit du Lac Érie, meaning ‘the strait of Lake Erie’ and referring to the Detroit River trade route.  You are on your own in translating Dequindre,  Gratiot and Charlevoix.

The French pulled out in 1760 and never looked back, but through the vagaries of fickle fate, foul fortune and a fellowship of felch-faced fiduciary  fuck-ups, our two communities have once more found common ground…

And for roughly the same reason:  Through oversight and under-planning, we became uncompetitive in the world economy.  Both France and Detroit were bitch-slapped by the global recession that began in 2007, and are currently experiencing staggering stats in unemployment numbers.  And to add insult to injury, the political will to enforce painful fix-it measures was, in both places, singularly unforthcoming.

As a result, the state of Michigan has appointed an Emergency Financial Manager to take over Detroit’s entire elected government, untroubled by the dictates of a democracy.  And as must come as no great surprise to city-born cynics like myself, Kevyn Orr winds up being a bigger douchling than the chumps and choads who dragged the city into its own sewer system to begin with. 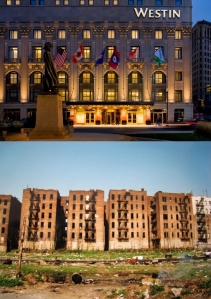 To wit: While preaching austerity and sacrifice and budget cutting, Orr (who is not even from Detroit, but Fort Lauderdale) rides around in a private car with a driver and bodyguard, all underwritten by Detroit taxpayers.  Despite a yearly salary which rockets beyond $200,000, Orr lives in a luxury suite at the Book Cadillac Hotel which he does not pay for.

Who does?  Why, we do, of course.  And by ‘we’, I mean people like Officer Mike Bender, a recent  graduate of The Detroit Police Academy, a beat cop whose starting salary is $30,000.

Make no mistake, Kevyn Orr’s raison d’être is not to help us, not to reform us, not to salvage our culture and not to rehabilitate our lost souls.  He exists solely to recompense the banks in any way he can.  And the latest street word is that that Orr is considering selling off the Detroit Institute of Art’s multi-billion dollar priceless collection in order to pay down around $10 billion in unfunded pension liabilities.

Personally, I missed out on a prosperous Detroit by a couple of decades, and it is difficult to slither thorough the slums, dawdle in the drek or promenade past the Projects and imagine that the city was once one among the world’s premiere destination spots—at the forefront of the nation’s industrial fields and nicknamed ‘The Paris of the West’ for our Gilded Age architecture.  We were the first city in the world to pave a concrete road, the first city to broadcast a news report (WWJ, 1920), the first city to install traffic lights.  We played a key role in industrializing Earth, and—thanks to our readiness to convert automobile plants to tank and plane manufacturing—we were called ‘The Arsenal of Democracy’ and were instrumental in winning World War II.  Speaking of which, we were also the first city in the world to restore to its rightful owner, Alice Meyer, a work of art that had been looted by the Nazis: Claude Monet’s The Seine at Asnières.

That marvelous gesture was down to the DIA.

‘Public’ is actually a misnomer in the above paragraph.  Unlike most city art collections, Detroit itself owns not only the DIA’s bricks and mortar but the artwork within.  As such, it has to be listed among the city’s comprehensive catalog of assets, and under our inevitable declaration of Chapter 9 bankruptcy, may be subject to a forced liquidation to satisfy our carnivorous creditors.  Kevyn Orc is currently having the works appraised to determine value.

Said garage sale would deplete Detroit’s amazing history beyond what could be recovered, leaving our cultural birthright up Kevyn’s Creek without an Orr.

A similar sell-off is happening right now in France, and it has plenty of Parisian people pissed, perplexed and petulant.

Thursday evening at the Palais de l’Élysée, the French White House and official residence of President François Gérard Georges Nicolas Hollande, the French Obama, more than a thousand bottles of prestigious wine went under the auction hammer as part of the French government’s cost-cutting initiative.  As a result, Hollande has been accused of ‘selling off France’s national heritage’.

As a Detroiter facing a similar heritage loss, I have a hard time telling the French to chill.

Nonetheless, ye fraternity of frantic Frogs; chill (48 °F for white people, 60°F for red people):  Apparently, only 10% of the Élysée cellar has been raided, which is a bit silly as it is expected to raise less than a half million dollars against a deficit of $13 billion, and most of that will be used to purchase more wine anyway, albeit from less noteworthy négociants.

So, the bottle of Champagne Krug, vintage 1985 which went for 1200 euros ($1,624) will be swapped-out with 160 bottles of ten dollar Charles Krug California Champagne, vintage twenty minutes ago.

“Even if they go for fantastic sums, it will be a derisory amount in terms of the national budget and when you think about what these wines represent in the eyes of the whole world.”

The above quote sort of sounds like Mssr. Chasseuil did not quite finish his sentence, which may be because his over-fuming and non-chilling left him speechless. 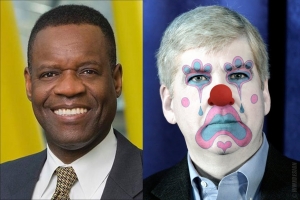 Nonetheless, his sentiments are echoed by those of us who may be forced to sit by as Kevyn Orr auctions off Motor City heirlooms:  Rodin’s The Thinker, Picasso’s Fruit, Carafe and Glass, Warhol’s Double Self Portrait.

And, of course—as referenced by the scarehead—Pieter Brueghel the Elder’s ‘The Wedding Dance’.

Not for nothing, I despise you and your cute, quirky misspelled name, ‘Kevyn’, you overpaid, beholden little prick.

And as for you Governor Snyder, much as you apparently hate Detroit, I assume you realize that the feeling—if not the Orr-gasm—is mutual.