MacLean Gets MacDirtier—The Column I Swore I Wouldn’t Write

Posted on January 8, 2013 by intoxreport

People always ask why I never post my own photo.  Happy now??

Of course, I leave the actual execution of my brainstorms to the pitiable proletariat; ‘pounding out the code’ is really sort of beneath me.

The only ‘blemish’ upon my skill set—if it can indeed be considered thus—is that so many ideas of such sheer mesmerizing brilliance blow through my head each hour that the very idea (see!?) that I would want to ‘revisit’ an older idea (hah!) is, to me, as absurd an idea (there I go again!) as Nancy Reagan accompanying John Hinckley Jr. to his 40th High School Reunion as his date.

PP meets Poo-Poo: The Doody Gets Deeper in Downtown Diva-ville 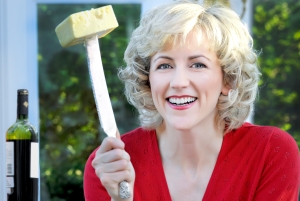 Nat pretends this piece of cheddar is David Honig’s aorta.

So, when repeat-offender Natalie MacLean was recently re-busted by Palate Press for requiring that certain wineries buy subscriptions to her newsletter before she’d even condescend to taste their wines (even those she solicited), I was all like ‘Whatev, ese…’  since she’d been pre-busted by Palate Press for being a copycat on her 150,000 member website, using other people’s reviews without proper attribution.

And that blighting breach of journalistic ethics I covered a couple of weeks ago at https://intoxreport.com/2012/12/23/maclean-is-macdirty-i-have-your-hack-back-natalie/

Erika prays before the match

I figured that unless the drinks business announces a nude, sudden-death mud-wrestling match between Nat and one of her Palate Press nemeses like Contributing Editor Erika Szymanski, there’s no reason for me—a genuine bastion of journalistic ethics—to rejoin the fray.

Personally, I’m better off sticking to my own endless whizbangeries, like last week’s exposé of fabled French Château de Minge-le-Vulvaux, where I discovered they’d been using not the dried bladders of Beluga sturgeon to fine their wine, but the retroverted uteruses of Seine-et-Marne virgins.

And then there was the profile of up-and-coming wine regions like Cambodia’s Khmer Rouge et Blanc Winery, with vines planted directly above the killing fields of Choeung Ek, where decaying human skulls are said to give the wines the identical savor as the shells of extinct marine organisms give to Champagne.

Either of these stories, of course, could have been had by Palate Press for a song—preferably one from Michael Jackson’s Beatles catalogue.

But, Back To Ratting Out Nat’s Scat…

As I said, I had no intention of giving this silly story the time of day—I mean, what do you expect from a Canadian of Scottish descent, uniting the two cheapest nations on the planet—Bill and Melinda Gates altruism?  So, the chick took a little payola in exchange for a little playola—she didn’t exactly undercut a presumption of objective impartiality in the reviews of those wineries desperate enough to ante up.

She pretty much did, but not ‘exactly’.

But then I read the ‘comments’ section, and decided to weigh in, having been tickled rosé to see 90 crazed and corybantic cries from the boscage (I didn’t count my comment, because I refuse to give me permission to reprint it or attribute it)—nearly all packed with bleeding anti-MacLeanisms:  Verbal venom like ‘…an utter imbecile of a taster and writer…’ and ‘…imparts a black cloud over all wine writers…’ *

* I, for one, can assure you that the black cloud over me has nothing to do with Fatcat Nat, but with that last bowl of Afghani Dream Stick opium.

There were a few—a very few (less than the number of people who voted for Ron Paul, actually)—exceptions; one, surprisingly, from Jancis Robinson toy boy Alder Yarrow, who wrote:

‘…In point of fact there’s nothing wrong with this practice…’

‘…there’s no reason that someone (such as Sam Kim, who I reference above, or Natalie) can’t try to make a business out of charging for reviews…’

Well, I never pegged Yarrow as much of a wanker, even though he named his beautiful daughter ‘Sparrow’—which is like MacLean naming her Canadianish kid ‘SpacLean’—but come on, Alder:  Maybe not ‘can’t, but the entire friggin article is not about ‘can’t’; it’s about why she shouldn’t.

And as to what’s ‘wrong’ with the practice, lest we work terms like ‘journalistic ethics’ and ‘personal integrity’ to death, there’s this cute white angel sitting upon all our shoulders whispering, ‘career suicide’.

No?  Ask a thousand global wine-savvy schmucks, ‘Who is the biggest douchebaguette in the wine industry today?’ and I guarantee you that not one is going to come up with hot, wholesome, all-American Karen MacNeil, even by mistake.

Chris in his studio.

And just so there is no question as to my own personal adherence to honor, ethos, legal standards and moral code, Palate Press may freely ask my little white angel (though enshrouded in black smoke) if Chris Kassel has ever charged for an opium review.