Posted on November 9, 2012 by intoxreport 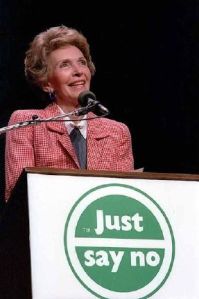 I came of age in an era that had Ronald Reagan scaring us with Cold War rhetoric while his wife was scaring us with Drug War rhetoric.  Her banshee yelp, ‘Just Say No’ saved many a naïve youth from that inexorable descent from a toke between class to death from a speedball overdose.

Me, a dutiful Catholic school boy, followed the First Lady’s exhortation, although I ‘Just Said Nope’, because the dealers usually thought I said ‘dope’ and I scored anyway.

Wine is not an illegal drug—although it was, of course, for a lot of years in the Roaring Twenties—but it’s a drug nonetheless.  However, thanks to the leap of logic shown by the great states of  Washington and Colorado, we can finally, without guilt, stuff a sock into Ms. Reagan’s yapper and start saying ‘yes’.

Being half-Swiss, anything and everything Swiss not involved with Nazi gold or suspiciously dormant bank accounts sort of turns me on.  And that includes the great house of Hess Family Estates, founded in Berne as a brewery in 1844.

For the next century, beer was the cornerstone of Hess prosperity, but in the 1960s, having taken the reins of the company following the death of his father Hektor Albert, fourth generation Hess, Donald, made the ballsy leap into bottled water, creating Valser Water—now Switzerland’s top mineral water company.

Having nailed down beer and water, you’d assume that the need for further diversification might be a bit over the top.  But in the world of entrepreneurship, over the top is the only eyrie worth sitting upon, and between 1978 and 1982, Donald Hess purchased 900 acres at the same lofty altitude as his dreams: 2000 feet above Napa Valley on Mt. Vedeer.

You Can’t Get Much Higher Than That, Can You Ms. Reagan?

Colomé is so far above sea level that the vineyard workers have to wear oxygen masks.

Think on.  Following a three-year quest to locate the source of an exceptional high-altitude malbec he’d chanced upon at a tiny bodega in Salta, Hess discovered Bodega Colomé—a winery even older than Hess Family Estates, having been founded in 1831.  That winery, now part of the Hess spectrum of properties and sits at 10,000 feet, making it the highest vineyard in the world.  Icing on the cake is the fact that some of the Colomé vines are 160 years old—making even the most senior old vine California zinfandel seem like a whippersnapper still wet behind the spurs.

While establishing other vineyards throughout California, in Argentina’s Northern Calchaqui Valley, South Africa’s Paarl Valley and noteably, Tanunda, in the heart of the Barossa Valley (Peter Lehmann Wines are among Australia’s most respected wineries), Donald Hess was also building a reputation as (according to ARTnews magazine) one of the world’s top art collectors—a position he’s held held for two decades.

With that aesthetic drive and—let’s be honest—the scoot to back it up, he built The Hess Art Collection where he shows the work of twenty living artists whose work and vision he supports through the long haul.

The presumption is, of course, that a man of Mr. Hess’s laudable altruism and farsighted appreciation of life’s finer things will soon be forming the Hess Wine Critic’s Collection—and blood, let me tell you, I check the mail daily for my application.

Randle Johnson decides that this wine is too young for release

Speaking of art and old vine zinfandel, one of the coolest projects in the Hess congregation is Artezin, a Napa winery specializing in zinfandel, with the odd tot of petite sirah and carignan tossed into the mix.

The mind behind the wine is crammed into the cranium of Randle Johnson, a vintner with a long love affair with the varietals of Northern California.  Having produced award-winning cabernet at Hess Collection for twenty years, he now focuses on Mendocino and Dry Creek zinfandel.

As hands-on as they make ‘em, Johnson says, “An old mentor of mine told me that to capture true varietal integrity—raspberry, boysenberry and that unique zinfandel spice and pepper, you need to pitch your tent in the vineyard and check the fruit every day.  And that’s exactly what I do.”

And he doesn’t compromise those flavors, either—picked at optimal ripeness over a period that may exceed two weeks, he crushes conventionally, then places the juice in used French barrels, where it only remains for a short while before bottling—and then stays in the bottle for a mere two months before release, ensuring that the freshness he so enjoys does not fade before the consumer (i.e., ‘you and me’) has a chance to get at it.

Johnson explains, “We want only a hint of oak, nothing to interfere with the bright fruit aromas,” and his wines are all of that, too: Nicely structured, fruity zins with classic black pepper spice above loganberry, blackberry and brambly, summery raspberry.

But best of all is the Randle Johnson zinfandel je ne sais quoi; something shows up in this vigorous, prolific, early-ripening grape—grown in fully 10% of California vineyards—with surprising rarity.

But, above all, to produce what Randle Johnson calls ‘zinny zins’, it requires a winemaker with such a neurotic, compulsive, stalking love of the grape that, were it transferred to a human being, would likely wind up in court with a restraining order.

Meanwhile, Back at the Ranch

So, with valley vineyards and mountain vineyards and the Su’skol, planted at a mere 50 foot elevation near San Francisco Bay, The Hess Collection is obviously comfortable with a tier system.  As indeed, is the cornerstone of their portfolio set-up:

Hess Collection Mount Veeder Estate:  From among the highest-altitude and most climatically interesting (coolest growing season) and most unique soil structures in Napa (formed by ancient uplifts of oceanic crust) ‘Collection’ wines are intense, multi-layered, generous and pure; they tend to reflect ‘sense of place’ on a scale that often exceeds Mt. Veeder’s other 15 world-class wineries.

Hess Select: The trio of varietals, cabernet sauvignon, chardonnay and sauvignon blanc are sourced from family vineyards and trusted growers, who have always been a cornerstone of many Hess operations.  These wines are affordable, amazingly affable and awfully appealing.

Whichever tier suits your buds and budget, you can pretty much be assured that the grapes were grown under standards of sustainable, environmentally-friendly agriculture—a philosophy that Donald Hess has fully embraced since one of his starving pet artists decided against selling him paintings because of some unnamed failing in biodiversity and greenery in his vineyard.  It caused Hess to rethink many of his business practices.

Now, personally, I think that showed remarkable, commendable, almost zen-like restraint on Hess’s behalf, because I believe that if it had been me, I’d have taken that pot-smoking, Just-Can’t-Say-No-saying, sniveling little ingrate behind the woodshed, which would have been damaging to the hippie hambone, myself, and possibly the woodshed.

In any case, you will find that 85 of the estate’s 310 already sustainably-farmed acres of vineyards are organically farmed as well; and Hess is in the process of converting the remainder to organic farming.

Donald’s overriding philosophy is ‘Nurture the land, give back what you take.’

I don’t know about you, but I like a rich guy who thinks about nature in a way that doesn’t include razing it, strip-mining it, polluting it or ripping it out to put up superstructures; who is less concerned with controlling nature than in appreciating her sacredness.  I like a company leader who wants to give back without looking for a tax write-off; I like a businessman who treats art not as a commodity, not as an investment or a status symbol, but as a gift from some higher plateau of sensory/emotional values.

And, hey, if he happens to be Swiss?  Gravy.

A couple new Hess Select wines just arrived, so I will give you the sommelier skinny below:

Hess Select Treo Red, California, 2010, around $16:  A blend of merlot, syrah and petite syrah shows bright red cherry, honeysuckle, vanilla, and clean plum juiciness.  The wine’s inherent freshness may be a good sign for the trio that Treo symbolizes: Donald Hess and his sons-in-law Timothy Persson and Christoph Ehrbar, who together will lead the company into a brave new future.

Hess Select Pinot Noir, Central Coast, 2010, around $16:  A decent under-$20 pinot is as elusive as a Banded Columbian Ground Cuckoo—which, you’ll just have to take my word for, is elusive.  Here you’ll find one: Surprisingly rich and complex, with silky black cherry, a bit of mushroom, lavendar, pie spice and sedate tannins.

(I must say here that the Select Treo showed up decked in SF Giants livery; and as a Detroiter swept in the Series, this was the enological equivalent of  finding a dead fish in front of the Corleone door.  However, that said, I will display Donald Hess’s zen-like restraint and leave the woodshed to the wood mites.  Plus, my buddy Jim Caudill is bigger than me.)