Signorello Trims The Edge Of The Fuse

When does ‘cutting edge’ become ‘trimming edge’?  When Ray Signorello, Jr. gets into the game.

I’m not sure if there is a direct translation of ‘signorello’ from Italian into English, but the Latin etymology is all about refinement, gentlemanliness and class.  Indeed, this estate—which has been producing top quality Napa grapes since the mid-1970’s—wears an aura of gravitas in its history, mission, quality and focus—even in the style and font of its labels.

Gravitas, which also has no direct English translation, means (in various measures) weight, seriousness and prestige, and connotes both substance and depth of character.  It is a word perfectly suited to the Signorello family and their extended ventures: It was one of the ancient Roman virtues along with pietas, dignitas and virtus—devotion, dignity and excellence.

To a profound extent, all of the classic Roman virtues fit the Signorello Estate bill.

Wistful venture capitalists in the field of electronics may look back upon Silicon Valley in the mid-Seventies and sigh; those into wine speculation have an identical reaction when they consider Napa wine country during those same years, when an acre of premium property (now selling for more than a quarter million dollars) could be had for the equivalent cost of a mid-level Chrysler.

One visionary turned do-inary was Ray Signorello, Sr., who had the insight to pick up 100 acres of prime vineyard along the Silverado Trail with a plan to be a grower rather than a vintner—then as now, virtually all top estates purchase some quantity of grapes from independent farmers.  But, with Ray Jr. in the picture and the legendary abundance of 1985’s harvest, the family began to custom-crush excess fruit and a whole new phase of Signorello diversification was born.

The following year, work began on a winery, and by the end of the decade, the Signarellos had been more than ‘bit’ by the winemaking bug—they’d been pretty much devoured.

Since then, with Ray Jr. tag-teaming the leadership role until his father’s passing in 1998, Signorello Estate has produced some of the Valley’s most noteworthy Burgundian varietals, with the chardonnay bursting from thirty-year-old vines full of righteous clout, culminating in style and elegance with the night-harvested, unfined, unfiltered Hope’s Cuvée—named in honor of the family matriarch, Ray Jr.’s mother Hope.

Pinot noir, which appears to last have been vinified in 2005, was a product of Carneros and has been likened to Domaine de la Romanée-Conti; it saw lees contact throughout 17 months of French oak aging.

How Red Was My Valley

Beginning in 1990, the Estate began to concentrate on red Bordeaux varietals, with a couple of acres of syrah planted to spice up the mix.  The vineyards currently include two acres of semillon and a micro-plot of sauvignon blanc which is used to produce the lustrous, barrel-fermented Seta—a wine with the depth and complexity of a top estate Pouilly Fumé.

Cabernet sauvignon makes up the bulk of the Signorello plantings; 24 acres in all, most of which is blended with estate-grown merlot and cabernet franc.  Winemaker Pierre Birebent, a graduate of Lycee Agricole Macon-Davaye in Burgundy, translates more French into his technique than merely the blends: His cabernet sauvignon sees extended maceration and frequent pump-overs followed by 20 months on Troncais, Nevers and Alliers oak made into barrels by companies he refers to as tonnelleries rather than ‘cooperages’—even when they don’t. 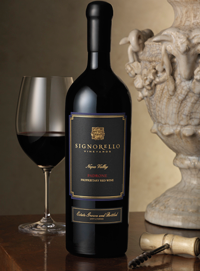 Without question, the Signorello flagship is an homage to Ray Signorello, Sr. in the limited-bottling of ‘Padrone’—a wine which Ray Jr. says, “…expresses the utmost quality of the Estate.”

Culled from two low-yielding (1.3 acres/ton) and rocky corners of the property, the concentrated and superbly-crafted cabernet/merlot blend erupts with huge, berry-saturated fruit underscored with the sort of exotic subtlety that only shows up in these brooding reds: Sandalwood, marzipan, eucalyptus.  At $135, the 2008 is neither for the faint of heart nor the faint of budget.

Now, just as we’ve pigeonholed Signorello as an opulent jewel in the heart of Napa whose wines, though exquisitely balanced and fiercely forward, can hit tariffs to make it a ‘special occasion’ choice alone, along comes a trio of smart, sassily named blends—mostly cab, but all three with a percentage of syrah—that retail for less than thirty dollars, and one, for under twelve.

Promises Ray Signorello, Jr.:   “These wines have my personal stamp of quality, providing cabernet sauvignon with integrity at affordable prices.”

By now, you should; he’s hit the quarter-century pedigree of gravitas, pietas, dignitas and virtus, which means he’s earned it.

Trim (Signorello Estates), California, 2010, about $12: Following a relatively cool, acid-reserving growing season, nature got a little cocky late in the day, tossing a heat spike at vineyards which brought the fruit to quick ripeness.  This wine is a notable $12 value, showing a lovely nose of plummy summer fruit, appealing sweetness and clarity, but with a touch of spice and earth to display more breeding than you’re used to finding at this price point.

Edge (Signorello Estates), North Coast, 2010, around $20:  A firm cab with discreet but scrumptious oak notes—the result of fifteen months of barrel age—wrapped around a core of current, blackberry, cedar and herbs.  The finish is long and touched with a twinge of coconut.