For those of you who think there is only one authentic martini—four parts gin, one part vermouth and an olive the size of Luca Brasi’s left coglione—Louie The Lush and me have an offer you can’t refuse.

And speaking of vermouth, for those of you who automatically free-associate a Martini (with his buddy Rossi) wine label with that odd botanical apéritif, believe me,  my Martini is a different guy.  Mine is Louis M.; the Genoan wanna-be winemaker who emigrated to California in 1899, realized his shortcomings, then hightailed it back to Italy to study the art among the Old World masters.

Beginning in 1911, Louis Martini began crafting rich, redolent reds in Pleasanton, 40 miles inland from San Francisco.   Like many of his countrymen, he not only scoffed at Prohibition but used it to make a killing—his, of course, was on law’s right side.  L.M. Martini Grape Products Co. specialized in sacramental wines and grape concentrates for homemade wine—a backbone of Italian family tradition that was hardly going to let Eliot Ness stick his untouchable schnozz into things.

In 1933, when the Washington Brain Trust finally woke up and passed the 21st Amendment, Louis M. built an eponymous winery in the heart of the Napa Valley and began to employ techniques that soon became signatures among his competition: Temperature-controlled fermentation, using wind machines to combat frost, planting cabernet sauvignon in red, volcanic soils (Monte Rosso on the Sonoma side of the Mayacamas Mountains) and ultimately,  becoming one of the first California vintners to bottle merlot as a stand-alone varietal.  His establishment of the Napa Valley Vintners Association in 1943 proved instrumental in raising the status of the region’s wines, chiefly by offering vintners a forum where they could exchange ideas and work collectively.

In 2002, after three generations of Martini management, E.J. Gallo bought the winery—although Mike Martini still makes the wine.  He lists a zinfandel, a chardonnay and a moscato in his wine line, but Mike’s focus—as it’s always been—is on cabernet sauvignon.

So that’s what I where I’ll direct my federal investigation. 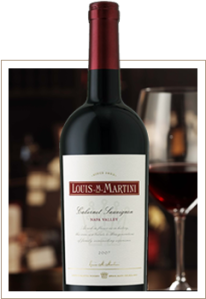 Louis M. Martini Cabernet Sauvignon, Napa Valley, 2009, about $30:  2009 was a pretty solid growing season in Napa with moist spring and mild summer than encouraged even ripening.  And then came October, when a pair of major downpours upset the Napa apple cart, which was, unfortunately, filled with grapes at the time.  Vintners who picked early did well; those who gambled did not.  I am thinking Martini played it safe, at least for a portion of this fruit, because there’s no obvious dilution of flavors evident.  The nose is big and black fruit focused; current, rum cherry, Damson plum and blackberry with some herbal notes.   The palate is jammy, showing components of mocha and tobacco with slightly grainy tannins and a rounded, integrated finish.

Louis M. Martini Cabernet Sauvignon, Alexander Valley, 2009, about $35:  This one is a genuine chest-thumper, Mike: An opulent, multi-layered cab with traction; you’d be wise to plunk down the extra fiver for the Alexander Valley fruit.  Dark and sensual with wildflowers notes to underscore a compelling concentration of brambly forest berries, cassis and anise; earth tones move in at mid-palate, with damp soil, damp stone and beautiful juicy saturation: A textbook wet Martini.  Grapes must have arrived at the crusher with tannins fully mature—the finish is long, silky, smooth and satisfying.  A wine for tonight, or a whole lot of potential tomorrow nights.

Plus, both wines show an elusive, intriguing character of ripe olives that occasionally shows up in cool-weather cabs; it should not be the slightest bit off-putting, despite its now inevitable association with Luca Brasi other testicolo.