“Now, because the chick grows rotten, she is gone but not forgotten.”

I’ll digress before I begin:

I recently read an Alice Feiring article in Newsweek called ‘Why We Should Love Natural Wines’, which I found interesting in part because Feiring—a respected and renowned wine critic, formerly with Time Magazine and named ‘Online Wine Writer of the Year’ by the Louis Roederer International Wine Writer Awards—claims that 95% of the wine she drinks is labeled ‘natural’.

As a non-respected, non-renowned wine critic who hasn’t won an award since my hairline was voted ‘Most Likely To Recede’ in high school, I am curious how someone who drinks wine for a living can so restrict her intake.  Either she’s pulling our collective hollow leg or intends to re-invent her popular blog to include only those wines which are dry-farmed, hand-picked, unfiltered and vinified without manipulation, added sulphur, sugar, foreign yeast or acid-adjusters.

Which—without stats to back me up—I’d guess comprises less than 1% of all wine made.

According to Alice, who admits in her opening paragraph that many wine people find natural wines to be ‘homogeneously cidery and coarse’ and compare them to bad vinegar, we should love them anyway.

The Phiering philosophy would likely phire-up the phunny bone of my hero Tom Wolfe, who in 1975 wrote a tongue-in-cheek assessment on why we should love abstract art—even art we found homogeneously cidery and coarse.  His conclusion (based on a quote by New York Times art critic Hilton Kramer suggesting that without a persuasive ‘theory’, abstract art cannot be appreciated) is that critics have become more important than either the art itself, the artist or the poor benighted consumer.

Wolfe says, “I had gotten it backward all along!  Not ‘seeing is believing‘ you ninny, but ‘believing is seeing’.”

Replacing enological terminology with art words, one re-reads Alice Feiring’s piece and concludes (as Wolfe did with all the Pollocks, the de Koonings, the Rauschenbergs and the Stellas he gawked at) that, within the genre known as ‘natural wine’,  it’s not ‘enjoying is believing’ you ninny, but ‘believing is enjoying…’

In 1997, in Champagne-Mouton, France (home of Pineau des Charentes, which has nothing to do with the story other than to justify its appearance in a wine blog), Ira Einhorn was arrested and ultimately extradited to the United States where he stood trial for the 1977 murder of the unstoppably-beautiful Holly Maddux.  He’d gone on the lam four years later, just days before his murder trial was to begin, by skipping bail and fleeing to Europe.

What gives the case it’s sickest, most Court TV-iest appeal is that, rather than doing the responsible thing and disposing of dead Holly, Einhorn kept her remains inside a trunk inside a closet inside his apartment.  In fact, he was caught when nature took it’s inevitably icky course and Holly began to seep into the neighbor’s apartment downstairs.

And So, Why Should We Love This Fleshy, Fumbling, Felonious Fuck, As My Headline So Pointedly Demands?

For the same reason that Alice Feiring incites us to love natural wine:

We should love Ira Einhorn because it’s Earth Day.

I mean, composting your girlfriend?  How much more ‘green’ can you get? 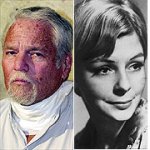 Now, before you start, People Who Think Earth Day Has Any Real Impact On Humanity’s Ecological Holocaust; yes, I know that event organizers have made sworn statements distancing themselves from Einhorn and saying it just ain’t so, but these are also the folks who petition to have carbon dioxide declared a ‘pollutant’ even though we exhale it, and who want electronics manufacturers to be liable for the cost of recycling TVs, even though real environmentalists shouldn’t be home watching TV—they should be out scraping British Petroleum sheen off of Mexican ducks.

Whether or not you accept Einhorn’s version of things, he insists that back in 1970, before he became a potbellied prisoner and was merely a whale-sized windbag, he alone created the largest secular holiday on the planet (this year, for example, over a billion people will refrain from exhaling on April 22) while he was hanging around the University of Pennsylvania campus writing poetry and seducing cute chicks.

What’s beyond question is that Einhorn was Master of Ceremonies at that first Earth Day rally in Fairmount Park, Philadelphia, introducing such photo-opportunists as keynote speaker Edmund Muskie (best known for the so-called ‘Canuck Letter’ in which he was falsely accused of making disparaging remarks about French-Canadians—like that’s a problem to begin with?) and Allen Ginsburg, author of the preternaturally awful ‘Howl’, which I still haven’t been able to entirely slog through even though he wrote it in 1955—but I’m trying; I’m trying…

So popular was the event at the time that in many places, Earth Day is now celebrated for an entire week—although most people opt out once they discover how hard it is to hold your breath for that long.

Despite the fact that Einhorn, obviously a charter member of the Pennsylvania Brain Trust, opted to defend himself (using as his central theory that the CIA framed him by murdering Holly and planting her body in his closet as payback for him investigating the agency’s  paranormal military research program), the jury came back after two hours of deliberation with a verdict of ‘repulsively guilty’.

I Know, Right?  I Couldn’t Believe It Either

Not that he was convicted, but that it took the jury two hours instead of two minutes.  But I guess after instructions, a lunch break and forty-five minutes of guffaws, giggles and belly-laughs, that’s about right.

Anyway, dear Ira is currently serving a life sentence in the Pennsylvania State Correctional Institution in Houtzdale, where it is unknown exactly how he intends to celebrate Earth Day, 2012.

My feeling is that we should all send him a aquifoliaceae sapling and request that he plant them in memory of every beautiful innocent slain by every sick narcissist everywhere.

Aquifoliaceae is Latin for Holly.

And should he respond that Houtzdale has no garden in which to plant them, we should suggest that he read the fine print on the Hallmark ‘Happy Earth Day, Psycho’ greeting card:

It’s our intention that he plant said shrubbery not in a garden, but within his fat, foul, fraudulent and festering sphincter.

And Happy Earth Day to you, too.

Here’s where to send holly bushes: