Mr. Natural Wine Sez: ‘YOU’RE The Right Tool For The Job, You Tool’

Unlike most wine columnists, I never get ‘writer’s block’.  Au contraire, I deny that the phenomenon—whereby people who can’t think of anything to say go ahead and say it anyway—even exists.

Oh, sure, sometimes our personal muses get all PMSsy, sometimes we’re in the middle of a sentence and realize, ‘Not only does this make no sense, but I’ve already said the same thing several times before,’ and occasionally, we are unable to string two words together due to a hangover caused by the very product we’re tasked to review.

And yet, the solution has always seemed to me as accessible as a Castello del Poggio Moscato d’Asti and boils down down this:

‘See what other columnists with writer’s block are coming up with and copy off of them.’

Today is no exception.  This morning I read an article by New York Times critic Eric Asimov entitled ‘Wines Worth A Taste, But Not The Vitriol’, which I instantly picked up on in the hope that ‘vitriol’ is some chemical additive that would cause a scandal like the one in 1986 where antifreeze was accidentally added to dolcetto.  OK, so it turns out that vitriol is actually N.Y. Timesese for ‘vituperation’ (which I also had to look up) and not something poisonous like sulphuric acid.

Even so, another column idea cropped up during Asimov’s very first sentence:

‘ROBERT M. PARKER JR., the powerful wine critic, called it “one of the major scams being foisted on wine consumers.”

I was intending to call my piece ‘Look Who’s Calling The Kettle Black’.

But then I read further, and realized that the genuine gist of the article concerned ‘natural’ wines, that newish and trendy category describing wine made the way people made wine before it needed newish and trendy categories.  In other words, wine that has not been surreptitiously shaped at any point during its life cycle, from field (chemical fertilizers, mechanical harvesters) to fermentation floor (reverse osmosis, spinning cone, cryoextraction) to  bottle (added sulfites).

Not all winemakers howl from the same hymnal when defining ‘natural’ wine, but it might be fair to suggest that the Aristotelian archetype is grown in an organic or biodynamic vineyard, dry-farmed without a Monsanto crutch, hand-picked and fermented without chaptalization or citric acid, aged without Sinatin 17 oak juice and bottled without sulfites.  Based on this, any profile of a natural wine contains more don’t than dos, but in general, is intended to restore wine to primeval purity and focus on the expression of terroir rather than the intervention of Dow.

This all sounds good on paper, but winds up a bit like the neocons saying, ‘Let’s return America to the ideals and standards upon which it was founded—right after we stole it from the Indians.’

Hence, the vitriol.  What yanks Robert Parker Jr.’s chain is that there are no government regulations determining the hoops through which you must jump to call your wine ‘natural’ nor any concrete definitions of what ‘natural’ actually means—as illustrated by my clumsy characterization above.  In other words, it’s an advertising buzz term meant to suggest that there is something inherently more wholesome about the product than something from (to use the California Wine Institute’s 500,000 case criterion) a large, commercial, mass-production wine corporation—like say, Cupcake,  ironically among the top selling wines at Whole Foods.

But does ‘wholesome’ translate into ‘more delicious’?  I suppose if you’ve ever eaten a rice cake or a plate of boiled tofu from Whole Foods, you can answer that question.  See, one problem with ‘natural’ wine is that the focus is necessarily on technique, whereas ‘unnatural’ vintners may be more concerned with the quality of their end result.  Mr. Jr. points out that his pet producers are mostly small French domaines making less than 5000 cases annually, and nearly all would fit into the colloquial interpretation of ‘natural’ by any rational definition.

Indeed, these boutique estates, like Domaine Gallety in the miniscule Southern Rhône appellation Côtes-du-Vivarais and Domaine Léon Boesch in Alsace make wine without additives or color enzymes, and only enough sulphur to prevent spoilage.  And say what you want about Robert Parker Jr., you can generally be assured that a wine he recommends is—under a pre-understood set of Parker preferences—pretty tasty.

One person who does indeed say what she wants about RPJ is Alice Feiring—and not only does she say it, she writes books about how much she hates him: The Battle for Wine and Love: Or How I Saved the World from Parkerization. 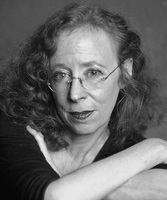 Not surprisingly, Feiring—a well-respected wine journalist who probably never gets really wasted, , hung over, or suffers from writer’s block—does not feel that natural wine is consumer fraud at all; rather, she thinks that ‘New World’ wine is the real scam, and refers to it as overblown, over-alcoholed, over-oaked and overpriced.  And not to over-do it, over-manipulated.  Recently, she has been getting a lot of positive press for her latest evangelizing effort, Naked Wine, which Amazon claims,  ‘peers into the nooks and crannies of today’s exciting, new (but centuries-old) world of natural wine’.

Admittedly, I have not peered into Ms. Feiring’s nooks and have scrupulously avoided her crannies, but I have seen her photograph, and I can assure you, if you were to attend a tasting with her, you’d be grateful that the wine was the naked one.

And then there’s loudmouth Rhône producer Michel Chapoutier, who considers ‘natural’ wine neither scamtious nor scrumptious, and uses a word which may have lost something in the Babelfish French/English translation: ‘Connerie’.  Since he’s obviously not suggesting that natural wine tastes like Sean, he may have meant ‘chicanery’ or, like Decanter Magazine’s Andrew Jefford dubs it, ‘charlatanry’—but in any case, Chapoutier calls natural winemakers ‘hippies’, thereby using a word which has not been used in half a century in the same sentence as he uses a word which has never been used at all.

So, What Are We To Conclude From All This Vile Venom, Vituperation and Virulence?

Absolutely nothing.  ‘Natural’ wine is as fictitious a term as is  ‘connerie’ or ‘Reserve’ on the label, and so, there is no real way to judge if such wines are better, worse or exactly the same as their competitors.  One vintner’s ‘natural’ may in fact be another vintner’s ‘manipulated’.

What I do conclude is that this column will garner hate mail excoriating me for suggesting that Alice needs a looking glass, that Michel is a silly little Frenchman with his head up his glass and that Parker Jr. is neither god nor devil, but an opinionated critic like us all.

Doubtless, I will be told that I will never, ever win a spot on the coveted and recently-released ‘100 Most Influential People In The Wine Industry’—a scenario so depressing that I’m tempted to chugalug a gallon of vitriol-laced Kool-Aid.

Without the enzymes or oak juice, of course—it’s healthier that way.