Can’t Get Much Cooler Than This Fonz: Fonseca Bin No. 27

What do Arthur Fonzarelli and Bin No. 27 have in common?

Both are feisty and irrationally cool, both dwarf their categorical co-stars in popularity, both have pinged in and out of cultural relevance—and prior to the early seventies, nobody had heard of either one.

Furthermore, did you know that both are from Portugal?

No?  Well, I suppose it is now time for a one-time-only shout-out to the punk band Fonzie, twice touted ‘Best Portuguese Act’ at the MTV Europe Music Awards.  Nominations notwithstanding, as representatives of the punk genre, they pretty much bite the bag.

From the oldest defined and protected wine region in the world, Port is often served as post-prandial (look it up) molar crumbler, but can be found in pre-prandial white, dry and semi-dry styles if you’re so inclined.   Like its neighbor Sherry, Port has the ability to change personalities to suit the role as easily as Henry Winkler—but unlike the latter, with Port it’s not called ‘acting’, it’s called ‘being’.

Tawny Port:  Speaking of rôle-playing, so enamored am I with the term ‘Tawny Porto’ that I used it as the name of a female impersonator in my unpublished, un-optioned and unproduced musical extravaganza Wholsom Prison Blues, which you and the rest of Western civilization have thus far chosen to ignore.  Well, short of wearing a peignoir and a gaff, to qualify as Tawny Port in Portugal you need to begin as a ruby port, then climb into an oak barrel for a minimum of two years, which would, of course, also qualify you as a nutcase, but would impart to your profile some nice, nutty overtones.  Tawny ports are slightly oxidized, accounting for their burnished brown-gold color, and rank medium-sweet to sweet on the cloy-ometer.  Those that bear an official ‘age’ designation are blends of Ports whose barrique-age averages 10, 20, 30 or 40 years.

Colheita:  A tawny port from a single vintage specified on the label.  Unlike ‘Vintage Port’, which sees about 18 months in oak, Colheita Ports may have been aged for up to 20 years.

Garrafeira: A rare incarnation that combines qualities both of oak aged and vintage Ports, the wine is highly regulated by the IVDP (Instituto dos Vinhos do Douro e Porto, Port’s legal advisory board).

Ruby:  The Joanie Cunningham of Ports.  Ruby is the youngest, lightest and easiest to understand of the myriad styles into which the species has evolved.  Characterized by fresh berry flavors, it is blended to the tastes of individual producers, but generally contains at least five of 48 allowable Port grapes.  Like Joanie, Ruby Port is bright, stable, sassy and (in later episodes) full-bodied.  I wouldn’t have suggested that either is ‘cheap’, but Joanie shaboinking Chachi was a game-changer; Ruby is the cheapest of the bottle-aged Ports.  Serve with: Shortcake.

Vintage Character Port:  The Chuck Cunningham of Ports.  Once a prominent member of the cast, ‘Vintage Character’ was dropped as a term by the IVDP following the 2001 season, and disappeared as though it never existed.  Such Ports are richer that Rubies and must be approved by the IVDP’s tasting panel—the Câmara de Provadores.  They are considered to be the standard-bearers for a producer’s ‘house style’ and legally, they now must be referred to as ‘Reserve’ Ports.

White Port: The Potsie of Ports.  Formerly a winemaker’s afterthought, prominent shipper Ernest Cockburn once loudly opined that ‘the first duty of port is to be red.’  Thanks for that slice of brilliance, Ernie, and also for your nonsensical name—when I was a sommelier and somebody asked, ‘Do you have any Cockburns?’ I always replied, ‘Only if I use sandpaper.’

Bouncy, lightweight and somewhat unsophisticated, white ports are made from a variety of white wine grapes, including esgana cão meaning ‘dog strangler’. They slip down nicely as an aperitif, lightly chilled and often mixed with tonic and/or Cointreau.  Serve with: Wonder Bread spread with Miracle Whip and Campbell’s Cream of Cracka soup.

Rosé:  The Ralph Malph/Pinky Tuscadero of Ports.  Silly but sincere, this is Port’s red-haired stepchild; a new category released by Pocas and Croft of the Taylor Fladgate Partnership.  Like the short-lived careers of Mr. Williams and Ms. Kelly, Rosé Port is a bit of a joke, with a critical reception like something out of the demolition derby—in part because it isn’t particularly good.

First released in 2008, Rosé Port may in fact be the moment when the appellation finally jumped the shark.

Late-Bottled Vintage (LBV): The Mork from Ork of Ports.  Perhaps the least understood, and in ways, most palatable among the Ports, LBVs are the product of a single, but often ‘undeclared’ harvest; for the most part, they are ready to drink upon release.  They can be found in two styles—filtered, which require no decanting, and unfiltered, which do—but which, unlike filtered Ports, can improve with a few more years of bottle aging.  Meant to replicate some of the character of Vintage Ports, they are lighter, less complex, and certainly less expensive than the blockbusters from declared vintages, but the latter make up only about 2% of the regions output and can be priced into the low stratosphere.  Nonetheless, LBVs undergo rigorous organoleptic testing by the Câmara de Provadores before they’re awarded the coveted Selo de Garantia—Port’s equivalent of an Emmy.

Crusted: The Mr. C of Ports.  A wine that wants to be all things to all people at all times, Crusted Port is blended from the two or three vintages and cask matured without filtration, resulting in its casting off a scab-like ‘crust’ of sediment made of grape residue. These wines are dense, velvety and ripe, but have never been well-known or particularly popular and today, the category is nearly as dead as Tom Bosley.

Vintage: The Mrs. C. of Ports.  Finally, the most venerable, concentrated and long-lasting of the Ports, from vintages ‘declared’ by conventional shippers only about three times per decade. They’re barrel-aged for a maximum of 2½  years before bottling in order to preserve the ruby color and fresh-berry flavors, but they require another ten to forty years in the bottle before they reach full maturity.  (Sensational wines from single vineyard sources in years not ‘declared’ are often sold as ‘Single Quinta’ Ports).

The oldest Vintage Port is from 1863—coincidentally, the same year that Marion Ross was born.  And, like Ms. Ross, it is still available.

I’ve looked online and stopped by two of the last three remaining Hallmark stores, and I cannot for the life of me find a greeting card category for this most sacred of fetes.

Hang on—it wouldn’t, by any chance, be one of those ‘made-up’ holidays, would it?  I mean, I’d hate for anyone to think I’m a cynic. 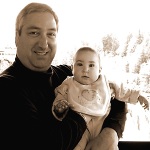 For The Love Of Port's Roy Hersh and Mini-Me

Alas, it turns out that International Port Day is indeed the fortified wine world’s answer to Kwanzaa.  Created by The Center for Wine Origins (CWO) and listed on the For The Love Of Port (FLOP) website, the event is an valiant attempt to shore up flagging Port sales worldwide, and to slap the wrists of anybody outside of Douro who dares use the demarcated and legally protected name ‘Port’.

As part of the effort to raise public awareness to the joys of their pet, CWO and FLOP have launched a contest where the grand prize winner will receive a berth in the April 2012 Port Explorer’s Tour of Portugal.  To qualify, you need to hold a Port-themed event in your restaurant, bar, hotel, basement, daycare center or prison block, and whoever comes up with most unique promotional idea wins.

Now, while the notion of a weeklong Iberian getaway certainly rocks my world, when you read the contest’s fine print you find that ‘airfare is not included’.  Which means that I’m expected to spend time organizing and filming (required to win) at a potentially rented facility, laying out cash for all sorts of wine on the off-chance that I might somehow come up on top of the Port pool.  Conservatively, that should set me back many hundreds of dollars.

For control comparison, the Michigan Lottery’s Mega-Millions Grand Prize is $50 million and costs a buck. 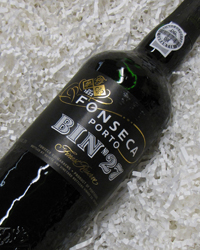 Still, if you’d rather visit Portugal than buy it, one of the wines that’s a must-serve at your Port Party is Fonseca Bin No. 27.

Created for the personal consumption of the Fonseca clan (and stored in private bin # 27), this Reserve Port produced primarily from wines from Fonseca’s own quintas in the Cima Corgo and thus shows an exceptional quality from year to year.  Decanting is unnecessary, and the wine can continue to age in the bottle.

At around $15 per bottle, Bin No. 27 is among the most approachable and consistent Reserve Ports available.  It is plush, firm and creamy with a deep bouquet of macerated blackberry and licorice intermixed with plum, cherry and sandalwood alongside a nice silken seam of tannins.

With respect, FLOPpers, you may keep your Theme Party contest—for me, a snifter of Port calls for reflective solitude: A roaring hearth fire, a blizzard outside the bay window (but naturally, Port in any storm) and most importantly, a copy of the epic book of poetry Os Lusíadas by Luís Vaz de Camões.

Of course, since I can’t actually read Portuguese I’ll probably get bored after a couple of pages and switch to TV Land and Happy Days re-runs.