Movers Need Shakers: In Search of the Perfect Martini

Posted on September 3, 2011 by intoxreport

You’re all grown up now, so it’s okay to admit it: There were a few things your parents got right.  For one, the universe is not at atom in the brain of God or anything else you thought of when you were high, staying up really, really, really late is not that much fun, and sex is not only overrated, but after a certain point it actually becomes a obligatory nuisance.

And, at the end of a workday, an icy, bone-dry martini is about as close to nirvana as you’re gonna get.

My own folks were little pockets of resistance during the ‘70’s, torchbearers of the world’s most sophisticated snort, holding their own throughout the martini’s Dark Ages, roughly 1965 – 1985.  During that span, the most noble of cocktail became passé—no, worse than passé, it became a metaphor for the indulgences of big business who piggybacked three martini lunches into a need for tax reform.

Lately, of course, the martini is enjoying a well-deserved, youthful renaissance, eagerly adopted by super-achievers of today. The steely clip of cocktail shakers, the effete tinkle of wide mouthed stemware can be heard resounding across the trendiest bars; throughout Urbania, the one genuinely adult libation so strong that it’s technically medicine (the drink, it’s said, that you can’t really begin to appreciate until you begin losing your hair) has again begun to reign fashionably supreme.

Evolving tastes have totally altered last generations recipe, however.  According to Sasha LeClerc of Royal Oak’s Goodnite Gracie, the standard old-school proportional recipe of 3:1 would elicit more shudders than sighs of satisfaction.  For some reason—ozone depletion, arguably—the recipe dries out every decade or so; currently, the standard acceptable martini is made Gobi-desert dry:  Say 8:1.  Order dry at Sasha’s bar, she is more than content to simply rinse the glass with vermouth and add the gin, which makes it more like 20:1

The origin of the species is lost in a straight-up sea of apocrypha.  Despite its association with rakish Brits, the martini (along with virtually every other classic cocktail) was an innovation of Americans.  The drabbest, least romantic—but most rational explanation for the drink’s name involves Martini & Rossi, a pair of Italians who produced the second ingredient of a bona fide martinis two essentials: dry vermouth, a wine-based aperitif.  Another possible source of the name can be found in the oft-quoted 1862 bartenders’ Koran, The Bon-Vivant’s Companion, or How To Mix Drinks, which defines ‘the Martinez’ as an ounce of gin, a wine glass of vermouth, a dash of bitters, two dashes of maraschino liqueur.  The proportional gin/vermouth flip-flop came later, as did the jettison of bitters and liqueur (a stroke of genius that must rank alongside booting Charles Manson out of the Beach Boys).

The martini had its first taste of popularity during Prohibition, when illegal bathtub gin required some kind of additive to smooth its harsh edge.  The cocktail quickly became a Jazz  Age symbol and in ensuring years found its way into twentieth century literature.  Dashiell Hammett may have drunk scotch, but his Thin Man character Nick Charles produced the consummate cocktail for his wife Nora by using a medicine dropper for the vermouth and a lot of gin for the glass.  In the classic comedy Auntie Mame, the title character eschewed olives, maintaining,  “they take up too much room in the glass.”  Mame also referred to her libido as ‘stirred, not shaken’  and demanded that her mid-afternoon tipple be mixed the same way.  By contrast, James ‘Let’s Slip Out Of These Wet Clothes And Into A Dry Martini’ Bond ordered his shaken, not stirred, and demanded an olive the size of a child’s fist, although according to Casino Royale, he liked his made with vodka, which technically makes it not a martini at all, but a Commie Cocktail.

Most bartenders disagree with that assessment, especially those working at the plethora of martini bars which have grown up in the Detroit area.  At Grosse Pointe’s Roberto’s, where seventy-five percent of the drinks made are martinis, a full ninety percent of those call for vodka.  A gin martini is an anachronism to the new breed of sippers.  Of course, that breed generally considers anything in the classic triangular-shaped glass a martini, and local bars vie with one another to come up with the widest variety of concoctions.

At Dearborn’s Double Olive Cocktail Lounge, 22 varieties of martini are ballyhooed (not one of them has gin as an ingredient), but all are clever:  the Dean Martini, for example, comes garnished with a Lucky Strike cigarette.  That, at least, resembles a classic martini; at Plymouth’s 336Main, the martini menu includes the Catch N’ Rays, made with coconut rum, banana liqueur and orange juice.  With his home in Jamaica, Ian Fleming might have approved but fair to say that if James Bond had a grave, he’d be rolling over in it.

Whatever the ingredients, however, martinis remain a status drink; the choice unwinder for the truly wound up, the preferred lubricant for those who dis the low-carb, new-Puritan morality.  It’s the ultimate sexy drink; one that makes you see double and think you’re single.  As for quantity, drink them with caution.  A short rule of thumb is that, like women’s breasts, one’s not enough and three is too many.

Any more than three and you’re likely to wake up in a strange city with a beard and a service revolver pointed at your head. 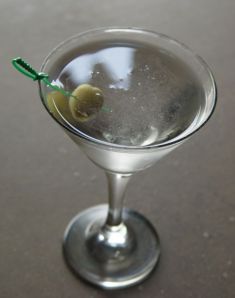 HOW TO MIX THE PERFECT MARTINI

Fill a stemmed (to keep warm fingers away), funnel shaped glass with ice water.  Let stand for at least five minutes.  Fill a cocktail shaker with ice, add four ounces of premium gin and one-half ounce Stock or Martini & Rossi dry vermouth.  Shake or stir for thirty seconds.  Drain ice water from glass.  Place in the bottom of the glass one (and only one) ace-quality, premium-reserve manzanilla cocktail olive, with or without pimento.  Strain martini into glass.

Most people routinely order their martinis dry, but the wise mixologist will memorize the following distinctions:

VERY DRY:  8:1 (The choice of F. Scott Fitzgerald, who married a lunatic and died young)

EXTREMELY DRY:  Add one eyedrop of vermouth to the shaker.

VERY EXTREMELY DRY:  Squeeze an atomizer of vermouth once into shaker.

BONE DRY:  Run a vermouth-wetted finger around the rim of the glass.

SUPERLATIVELY DRY:  Open a bottle vermouth, set it down on the windowsill and mix the drink on the other side of the room.

TOTALLY SUPERLATIVELY MAXED-OUT DRY:  Legislate the letter ‘V’ out of the English language.