Shigeru Yamada stands behind his array of designer sakes with a demure, otherworldly expression that seems to conceal, in a glance, all the profound mysteries of the Orient.

Then, the inimical owner of Novi’s Cherry Blossom Restaurant smiles and opens up and shares the wisdom and insight of his innermost meditations:

Chris Kassel is your garden-variety white boy and everything he knows about sake is wrong.

Okay, then; Yamada begins by kick starting my pronunciation. ‘Sake’ is pronounced sah-KAY, not SAH-kee, and it refers to alcoholic beverages in general, not just the stuff we call sake; in Japan, that’s known as nihonshu.  He moves on to methodology: Sake (as I will continue to call it anyway) is not rice wine but a complex brew that’s closer to beer, but with one important difference: In production, the unique koji fungus buddies up with the yeast in the starch-to glucose-to alcohol conversion, and results in a brew than can be close to 20% alcohol.

And finally, Yamada corrects my view on the taste factor—the biggest revelation of them all!

It turns out that sake doesn’t sucky.

Like most naïve yanks, I have in the past ponied up to sushi bars to sip warm—even hot sake from silly little cups, which is generally how they serve the cheap, low-end plonk that’s often woody-tasting and fortified with distilled alcohol.  Heat, like extreme cold, disguises flaws in a lousy sake, but may aggravate others, like intrusive potency and shuddery dryness, making yucky sake ickier.

My uninformed sake verdict?  Dōmo arigatō but no dōmo arigatō.

Yamada scoffs, setting up a horizontal tasting from his dizzying array of elegantly packaged sakes, one from each of the top six classifications known collectively as tokutei meishoshu, or ‘special designation’ sakes.  He promises, then proves that well-made and lightly chilled sake is a sublime creation; brewing technology and new strains of sake rice as well as improved technique have made it so.  Indeed, the line-up was fragrant, floral, delightfully refreshing, clear as ice and not only an ideal sushi accompaniment, but the only one.

These days, for this caucasian homeboy, it’s konnichiwa the good stuff.

Which brings us to Terlato Wines.

A while back, owner William A. Terlato announced a plan to market three premium sakes under the ‘shimizu-no-mai’ brand.  Short on capital letters but long on exclusivity, the trio is brewed by famed toji Noboru Minagawa at the historic Akita Shurui Seizoh brewery in Japan.

Says Terlato, “The shimizu-no-mai products uphold ancient tradition while producing sakes that can be enjoyed by expert and aficionado alike.”

Rather than pester Terlato on how an expert differs from an aficionado, I’ll suggest that his three, new, equally capital-letters-challenged sakes, ‘pure dawn’, ‘pure dusk’ and ‘pure night’ offer a lot more than pure hype.  Priced like boutique wines, between thirty-four and a hundred dollars a bottle, each reflects a distinct and fully intended flavor profile meant to express regional preferences and local food-style pairability.

Terlato expects a dynamic market for these brews, and based on the samples I tried, he’s probably right on the not-insignificant money.  Drink people, especially inAmerica, are easily jaded, and may well latch onto sake once they’re convinced of its role beyond Japanese cuisine.  For example, sake compliments many Western seafood dishes—poached lobster especially—better than wine.

As for me, no longer a sake lackey, I’m now on board the Tokyo bullet train to nirvana.  In fact, yesterday I bought a Costco-portion of Uncle Ben’s Converted Rice, then mail-ordered twenty-five grams of koji fungus from www.kagi.com

I’ve got a yen to home brew a batch, and I guess that makes me even more of a convert than the rice.

Notes on notes:  Evaluating sake is unlike wine tasting on a number of fronts; whereas a few of the sensory points (bouquet and finish) are similar, with sake you look for more elements tied into the elusive fifth ‘basic taste’ called umami—a Japanese loanword which may be translated (loosely) as savory or meaty.  In sake, a subtle but essential earthiness is sought after and prized; ‘presence’ is a descriptor that is akin to, but not identical to ‘body’ or ‘richness’.  ‘Impact’ is another sake term without an exact wine translation; it refers to the sensation a given sake makes between aroma and first taste. 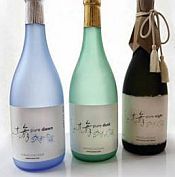 ‘pure dawn’, shimizu-no-mai, Junmai Ginjo, about $34 ($14, ½ bottle):  Delicate honey and cantaloupe on the nose; a racy and electrifying mid-palate with a refreshing sweet/dry balance diffused by a very soft bitterness at the finish.

‘pure dusk’, shimizu-no-mai, Junmai Daiginjo, about $40 ($16, ½ bottle): A striking, cherry-touched tone of sweetness at the outset dispersing into a full-body, slightly grainy and focused rice flavor, finishing with an elegance that’s clean, but persistent.