For some reason, zinfandel is the only grape varietal that really lends itself to excruciatingly lousy puns.

I mean, what do you do with gewürztraminer?  Petit verdot? Aghiorghitiko?  Chardonnay, maybe, if you pull a Fred Sanford, mix it with Ripple and call it ‘chardonipple’.

However, with zinfandel, winemakers can’t seem control their basest of instincts: the uncontrollable notion that the way to a consumer’s wallet heart is through his funny bone.  Thus, you end up with such groaners as ‘Zin Your Face’, ‘7 Deadly Zins’, ‘Zen of Zin’, ‘Inzinerator’…

And the latest offering from the Big House line: Cardinal Zin. 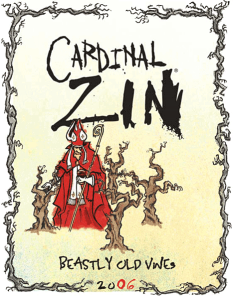 Formerly a stand-alone brand (with a gag-name like ‘Cardinal Zin’, chances are you would generally find yourself standing alone), CZ was recently picked up by Big House to round out a portfolio that did not include a zinfandel.  Winemaker (a.k.a. ‘The Warden’ in yet another Big House criminally cute jail-centric joke) Georgetta Dane uses such alliterations as fervent, fecund and frenzied to describe her wine; also, the puzzling descriptor ‘forbidden flavors’.  What, it tastes like black tar heroin?  Dane waterboards her grapes in cold-soak tanks, ferments them cool and runs them through the malolactic gauntlet before a lock-down in oak.  (See, Big House is not the only entity that can do prison humor).

The grapes (80% zin, 10% mourvedre, 8% carignane, 2% petite sirah, 0% convict-made pruno) are sourced from all over California, giving the wine a generic appellation, but allowing Dane to draw from numerous vineyards and some of the oldest vines in the state.  Hence, the trademarked byline ‘Beastly Old Vines’.

The result is a rich, peppery wine with soft tannins, a bit of toast and vanilla and a full palate of berry flavors—blackberry especially.  At ten bucks a bottle it’s a steal—your average inmate can afford one after a mere three days worth of license plates.

Other Big House offerings include Unchained Chardonnay, The Usual Suspects Cabernet Sauvignon, The Birdman Pinot Grigio and The Slammer Syrah.

As a house rule, these wines are solid bargains, well-crafted, easy on the nose, gentle on the tongue and quite reliable, although clearly, whoever named them should be locked up.

This entry was posted in Zinfandel. Bookmark the permalink.