…Or, as my buddy Elie says, Tintus Interruptus, which may be a direct translation into one of the several languages he speaks, possibly Latin, but probably not.

The term was coined as we tried to describe a wine at a midway point between rosé and red, a wine in which the free run juice is bled before the grapes are pressed.  In general, this technique is called saignée, and requires a few asterisks before it produces a wine of the sort over which we were confabulating. 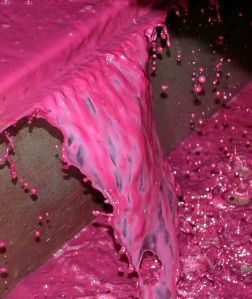 Some saignée juice never sees a bottle, or even a yeast cell, and is merely discarded as a useless by-product.  That’s because some wineries use the bleed-off method simply to concentrate the phenolics, color and flavor in the remaining  red wine. Lest this seem less conscionable than it is, a lot of the value in the run-off is found in the quality and ripeness level of the grape, along the length of the maceration, if any, before the juice is re-purposed. You’d think that simply throwing it away would be sacrilege, but when the run is substandard, fermenting it is an afterthought, primarily to increase cash flow for the winery and not to produce a wine of any particular merit.  In Provence, home to some of the world’s premium pinks, grapes are grown and harvested with rosé as the intended end product, and saignée may be treated with the same disdain as chaptelization—adding cane sugar to a wine.

Says François Millo, president of the Provence Wine Council, “Saignée wine is more of an afterthought; very few people in Provence use it. 85% of the wine we produce is rosé, so it’s at the top of our priority list—our grapes are grown for rosé and our harvest is done for rosé.”

Millo also tends to favor rosé with as little color extraction as possible, so that his top consumer choices from Provence are pale as an onion skin, no darker in the glass than pink lemonade, yet maintain the Provence flavor profile: “We’ve worked hard recently on methods that allow us to extract the maximum flavor while keeping the wine as light in color as possible. Techniques like night harvesting and macerating at lower temperatures have helped.”

Millo’s summation?  “The saignée method is a bad way of making rosé.”

Millo can go engage in a convoluted coital position involving himself: He never tried Cerasuolo d’Abruzzo from Tiberio (around $21).

It’s trendy to love rosé these days, and God knows I wouldn’t want to be seen on the outside looking in.  When well-made and bone dry, rosé is as delightfully refreshing a summer wine as exists anywhere on earth. But we’re all grownups here, so I can say honestly, without much fear of backtalk, that even the best of it can be somewhat one-dimensional. In other words, even if rosé crosses over into the oxymoronic land where it possesses several dimensions of one-dimensionality, my reams of tasting notes over the years all seem to center around a couple of key rosé descriptors—watermelon and strawberry—no matter what the parent varietal was. In a discipline where we look for unique characteristics in a wine based on what sort of grape (s) are at the foundation, this indicates to me that a degree of sameness is inevitable no matter what approach you take.

But, Tiberio’s Cerasuolo d’Abruzzo, made from Montepulciano grapes, bled after a short, cool maceration period prior to fermentation, upsets the grape cart. The name means ‘cherry-like’, and it has it’s own DOC, the newest one in the central Italian region of Abruzzo.  And cherry-like it is, from the brilliant, translucent, electric crimson color to the crisp, clean, tart cherry aroma, all the way through the palate with nary a watermelon or a strawberry to be found.

A Rosé By Any Other Name Would Smell Like Watermelon

The kicker is, talented winemaker Cristiana Tiberio, who produces wine from her family’s  74 acres in the Cugnoli area of Pescarese, a cooler micro-climate than the neighboring coastal areas, doesn’t consider the wine rosé—rosato in Italian—at all. In her vision, Cerasuolo d’Abruzzo is a red wine in which the fermenting must simply sees less time with the red grape skins, serving to lessen the pigmentation and tannic structure, and to produce a youthful, fruity red wine. 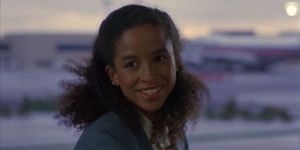 In the end, though, I’m afraid it’s a little like Rae Dawn Chong insisting she’s a Chinese Scotch-Irish Afro-Canadian Cherokee. Try to marry a Kennedy, Rae Dawn: You’ll find out what you are.

Likewise, the bottle of Cerasuolo d’Abruzzo is clearly labeled ‘Rosé’ for the American market, so it’s a matter of legalese if you want to call a case of it six-of-one and half-dozen of the other. For me, it is a sensational, rich and complex saignée, and if you and Millo want to drink wine that looks like onion peels, be my guest.  Give me a frosty glass of rosé the color of fresh Traverse City Morello cherries every time.

Call it what you want in whatever language you choose.  Edray Interruptedhay, by the way, is Pig Latin.