You can slice them and dice them, rank them and spank them, praise them or raze them, but there are really only three region on the planet that regularly produce Sauvignon Blanc of any true splendor—the Loire, Bordeaux and Marlborough, New Zealand.

The reasons for this are as abstract as any novel and as as explicable as any Nasco science experiment. Sauvignon Blanc’s flavor palette is generally dichotomized within tasting notes into two primary categories, grassy and fruity.  The grass often goes under synonyms like ‘new mown hay’, ‘herbal’ and ‘green’ while the fruity ones will be described with ‘grapefruit’ and ‘gooseberry’.  Many winemakers will assure you that they are aiming for a specific style, but terroir always triumphs: You can pick early or you can pick late, you can use this yeast strain or that, you can plant Clone A or Clone B, but the climate and the soil will ultimately nudge Sauvignon Blanc in one direction or the other, and this, of course, is a good thing.

The chemistry behind the categories can be simplified:

A concentration of thiols, notably the mercaptans, give Sauvignon Blanc it’s tropical fruit flavors and in extreme doses, account for the smells of sweat and urine that may mar an otherwise lovely sip.

Methoxypyrazines are the chemicals responsible for the herbal qualities in Sauvignon Blanc; this is a class of compounds so intense that detection thresholds are said to be two parts per trillion.  One of these molecules in particular,  3-isobutyl-2-methoxypyrazine (IBMP), appear in great quantities in green Capsicum peppers; you will taste the occasional Sauvignon Blanc that tastes like jalapeños.  It’s sister methoxypyrazine, isopropyl methoxy pyrazine (IPMP), is more frequently found in Sauvignon Blanc’s cousin, Cabernet Sauvignon, and accounts for those wines’ characteristic coffee tastes.

This concludes the dull, banausic portion of today’s story.

Among the three regions given in the opening paragraph, the Loire—especially the villages of Sancerre and Pouilly-sur-Loire, where Pouilly-Fumé is made—has long been a spiritual sanctity for pure Sauvignon Blanc, meaning a clean, crisp and acidic wine that showcases the minerality of the chalky hills of the region, sometimes at the expense of either grass or fruit.  When suspended in ideal balance in the top estate wines of Château de Tracy and Domaine Henri Bourgeois, Loire Sauvignon Blanc is nearly electrically charged.  It remains, in my book, the most beautiful version of the varietal. 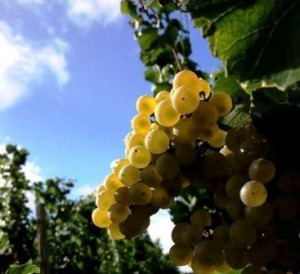 Which is not to say that I don’t appreciate a solid, hedonistic white Bordeaux.  Like the red wines, it is rare to encounter a pure Sauvignon Blanc int Bordeaux; they are nearly all blended with Semillon, and to a lesser extent, Muscadelle.  The dry ones—the wines that would slide into the same slippery slot as the Sauvignon Blancs from Loire and Marlborough—primarily hail from Graves on on the left bank of the Garonne river, and in Pessac Leognan especially. Here, the soil is composed of a blend of clay, gravel and large deposits of limestone, ideal for producing a rich cornucopia of tropical flavors in the wine, pineapple to mango, especially when combined with barrel fermentation and lees aging.  These dry white Bordeaux are not to be confused with that other, molar-crumbling Graves paragon, Sauternes.

The baby of the SB superstar siblings is Marlborough, who only started the marketing juggernaut that won it a spot on the podium in 1979.  In ways, the grape still seems to be finding its voice, but it is clear that the terroirs of the north-eastern corner of New Zealand’s South Island are some of the best in the world for Sauvignon Blanc. Although commercial quantities of wine grapes were not cultivated here until relatively late in the twentieth century, the first vineyards were planed a hundred years earlier by pioneering Scottish farmer David Herd.  Another David, David Hohnen, along with Kevin Judd may be credited with starting the cult status of Marlborough Sauvignon Blanc in 1985.  That’s when they founded Cloudy Bay.  So unique and potent was the wine that it began to draw hundreds, then thousands of visitors; arguably, that number is now in the millions, and the iconic SB is something of a bench marked style for the area—intensely expressive to the point where it may seem over-the-top, like some of the annoyingly-extracted fruit-bombs from Australia, too much of a good thing.

I tried a trio of Marlborough Sauvignon Blancs earlier today, provided by importer W. Gillett Johnson of International Vines, who assured me that to measure Marlborough based on Cloudy Bay’s style of overdriven Sauvignon Blanc would be a mistake.  There are plenty of subtle, steely, Sancerre-like Sauvignons available; they may not get the press of the hundred-thousand case Clo

udy Bay, but they offer the tighter, crisper angle on the appellation.

Arona, 2015, about $12:  Penetrating nose of honeydew melon and lemon=lime dominate; there is a sense of crushed stone with faint grapefruit in the background. What struck me as savory and sweet is not necessarily the herbal quality, but the spectrum of those herbs that rises from the glass after a brief period of aeration: Tarragon, oregano and woodruff each appear in quick bursts.  The wine finishes cleanly with a touch of sweetness.

Three Brooms, ‘Single Vineyard’, 2015, around $13:  A minimal mineral nose wafts up upon initial pouring, but the wine exploded after a minute, showing deep notes of sweet, creamy lemon, light green pepper, and an encompassing palate that reaches from tongue tip to tonsils.  Winemaker Simon Barker crafts the wine from select fruit grown in the micro-climate of Awatere Valley; the vineyard here nestles in a tiny zone that permits hang times up to two weeks longer than the surrounding terrain.

Ranga Ranga, 2015, about $11:  Insignificant bouquet; a little green fruit and hay, but not much.  Potentially a bit of bottle shock; there is, as tasters know, a ‘dumb’ phase that most wines go through where their expression is muted.  Still, for the price, I tend to think it is merely an aromatically-challenged wine.  It’s fuller in the  mouth, though, with bright Key Lime pie and gooseberry notes offering lift and vibrancy; a nice mineral and acid backbone run through the core of the wine and leave a sharp, crystal-clear finish.