Final online installment of sample chapters from ‘Starstruck in Lodi Again’.  Book’s pretty much in the can and will be released by June 1, 2016.

A tall, buff, Teutonic, well-spoken European wine pro in his early forties? Making unique wines that can, in ways, re-define his appellation?  Put this dude in any tasting room in any wine country in the world and you’d assume the lines would be out the door.  Yet when I asked Markus Niggli how many customers Borra Vineyards drew last weekend? 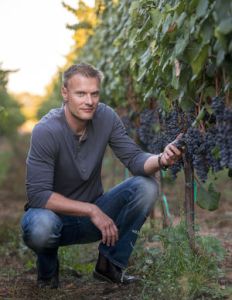 That figure does not have a couple of zeros after it in case you are reading it as a typo—leading one to all sorts of bizarre conclusions, none of them accurate. In fact, the tasting room is out of the way, and it’s not huge; Niggli’s personal brand is something of a Borra Vineyards afterthought and I did not ask the question during ‘the Lodi tourist season’ such as it may or may not exist.

Like the locale, some of Niggli’s varietal choices are a bit off the beaten wine trail path.  Kerner, for example.  Or Bacchus.  How do you lure non-geeks like me into your tasting room, right in the middle of Old Vine Zintopia, with obscure Swiss and German white wines?

Apparently, that remains an open question.

Kerner and Bacchus are cold-climate grapes developed during the last century and they are well suited to the winter wonderland of Germany, Austria and Alto Adige in Northern Italy.  They are a strange, but ultimately functional choice for the Mediterranean climate of Lodi.  Kern is a cross between Riesling and a red varietal called Trolligner; Bacchus was a hybrid created by viticulturalist Peter Morio at the Geilweilerhof Institute for Grape Breeding in the Palatinate, a three-way blend of a Sylvaner, Riesling and Müller-Thurgau.  Neither offers any genuine synergy with Riesling—that is, a sum greater than the whole of their parts—and likely couldn’t: Riesling is, without question, the most versatile grape in the world.  The crossbreeds were an attempt to ‘fix’ some of the limitations of the parent grapes.  Bacchus, for example, has a high must weight and can ripen in climates where Riesling struggles. Kerner, which at one time was Germany’s 3rd most planted grape, offers resistance to downy mildew, powdery mildew and botrytis and it produces an abundent crop.  It has been used as a sort of the poor volk’s Riesling, Kerner as the poor volk’s  Müller-Thurgau, with Bacchus more or less bringing up the rear.

But these grapes can at least bright and crisp and unique and Aryan, so along with Gewürztraminer and Riesling, they held immense appeal to winemaker Markus Niggli:

“I’m from Switzerland,” he told me over a glass of ‘Nimmo’—a blend of Kerner, Gewürztraminer, Riesling and Bacchus—“These are grapes I grew up with, grapes I identify with.”

It probably helped that he could identify them—there aren’t many grown in California, obviously, and across the state, all four Nimmo grapes combined probably represent less than ten thousand acres, and most of that is planted to the sort of perenniel Pacific pet-project, Riesling. 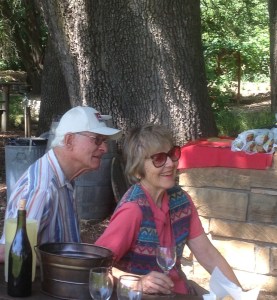 pullthatcork wants credit for this photo.  Revel in it!

Eight of those acres—the ones key to Niggli’s story—were planted in  by  Bob and Mary Lou Koth, about a quarter of the 26 acres that had been in their family since the early 1960s. They had been primarily Chardonnay and Zinfandel growers until their daughter daughter Ann-Marie, now a German language teacher at Lodi High School, returned from a Fulbright scholarship in Germany with a roster of new favorite wines.  In 1994, they planted an experimental ‘German Collection’ that included, along with the Nimmo quartet, Rieslaner, Schonberger, Ehrenfelser, Kanzler and Oraniensteiner and Weisser Burgunder.  There are also some red varietals planted: Blaufränkisch *, Zweigelt, Dornfelder and Spätburgunder—a German clone of Pinot Noir.

* As a brief digression, if I suggested that Blaufränkisch is the single most expensive varietal currently produced in California, you might think it was another typo, but according to the annual Grape Crush Report released by the USDA, Blaufränkisch went for $3,400 a ton—the only red grape to break the $3 k ceiling.

Niggli’s winemaking story didn’t begin until he was thirty; he  has a business degree in tourism and marketing, which may in fact make the relative scarcity of tasting room patrons even more ironic.  He worked for Swiss Railway and American Airlines, and in the course of his world travels—a perk of the position—he began to explore wine regions and learn what people were trying to express in their wines through regional traditions, indigenous grapes and personal imperatives.  In 2004, he decided he wanted to learn not only what winemakers did, but how they did it, and without having banked the quarter million dollars it takes to get an enology degree at UC Davis, he headed to Perth, Australia, where he spend a year studying viticulture until the money he did have ran out, then headed to Napa to look for work… any work.

“I couldn’t find anything for a long time, even though I’d just come from Swan Valley where I worked tasting rooms days and studied viticulture nights.  Apparently I still wasn’t qualified for a $10 per hour job changing hoses.”

Ultimately, he fell into a consulting gig in which he was responsible of shipping grapes to the East Coast, and in that role, met a few of the winemakers out there that remain part of his winemaking program today.  His private label  ‘Markus Joey Insieme’ (2014) is a blend of California Torrontés and North Carolina Riesling.  ‘Insieme’ means ‘together’ in Italian and ‘Joey’ means Joey Medaloni, a former nightclub owner who, like Niggli, began making wine in his thirties.  The spec sheet refers to Insieme as ‘a worthy substitute for a morning Bloody Mary’, which must be unique in the annals of wine tasting notes.

Unique is the name of the game, of course, and the wash of wine that I sampled with Markus that lonely afternoon in the tasting room reflected every bit of that, some with more success than others.  The problem with Kerner is that it can produce wines so sharp you can clean your teeth with it, and often does not provide sufficient fruit to sufficiently liven up the party.  Kerner-heavy wines tend to be high in minerality, austere and frosty, often strikingly acidic and Niggli’s tendency to pick grapes early, sometimes at 21° Brix, amplifies this.  Despite the use of native yeasts in his fermentation tanks, these wines are hightly stylized works of contemporary art.  The labels themselves are as well, having been designed by students at the University of the Pacific in Stockton—students who, Niggli says, “…have their passions in the right place.”

At my request, Markus walked me through a year-by-year overview of Lodi’s changing terroir, which he has followed with the keen sense of a climatologist.  The rap offered insight not only into some of the unusual flavors he seeks and elicits, but why, of all the terroirs in all the gin joints in all the world, he settled down in this one.

Since he began making wine at Borra in 2006,  Niggli has kept obsessive records of horticultural events at the vineyards he relies upon, and he sees patterns that show some drastic shifts in climate—tangible stuff, tasteable stuff, not charts from a NASA site.  All vineyard managers have noticed a red shift in the growing season; bud break occurring earlier and earlier, flowering following suit at aquickened pace, and grapes that may reach optimum ripeness as much as a month earlier today than they did twenty years ago.

“And it’s not just here,” Niggli points out.  “Look at the changing face of Spanish red wines.  Garnacha—today, it’s fruit forward, high acid, less hang time. Here, in 2013, we started picking Zinfandel at the beginning of September rather than the end, and in 2014, when we had a warm winter and a dry, hot summer, we brought in the first trucks of Zinfandel on August 20.   In 2015, we actually began to harvest Syrah before the white grapes.”

He further describes 2015 as an early bloom, with a cold snap during flowering leading to an initial loss of crop of around 20%.  Then the drought kicked in, and the season progressed well with great flavor intensity.  But, Niggli notes, a significant downside to warmer winters is that many insects that normally would have perished now survive and eradication programs are becoming progressively less effective.  The drive toward organic production limits the pesticides that can be used, and many of the natural ones are not potent enough to get the job done.

A bug boom and the resultant explosion of insect-borne is a reality which those who enjoy the benefits of a milder climate will need to contend.

A ‘niche’ may be literally defined as one of two things: An ornamental recess or a distinct segment of a given market.  In this case, during my visit,  the tasting room at Borra was both.  Sort of cluttered, but not with patrons—with cases and knick-knacks and awards; it’s cozy like a Swiss chalet.

Outside, Borra sprawls across two vineyards and many decades, with origins spanning back to Benevagiena in the Italian Piedmont.  That was the home of Stephen Borra’s maternal grandfather Giuseppe Manassero who emigrated to Lodi over a century ago and set up shop on Armstrong Road, where the winery sits today.

Stephen has owned the place since 1966, and prior to hiring winemaker Markus Niggli in 2006, the family focused on Barbera and Carignane and, in 1992, after purchasing an additional 200 acres planted to Old Vine Zinfandel and Chardonnay, further expanded into 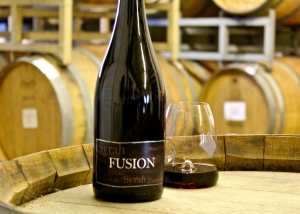 Merlot, Viognier, Cabernet Sauvignon and Syrah.  These remain the core varietals at Borra and as it happens, Niggli excels In producing them.  His Fusion Red 2009—a proprietary blend of Syrah, Petite Syrah, Zinfandel and Alicante Bouchet took home double gold at the 2012 San Francisco Chronicle Wine Competition; 2008 Fusion Red also found a spot on the Wall Street Journal’s Annual Dozen top wines, although ironically, the accompanying blurb mentions that the wine ‘regularly fills the tasting room’ (!)  Apparently, either they are sold out of the ‘08 or I caught the crew on the wrong day.

Either way, recombinant, Borra and Niggli are steeped in tradition while embracing the changes in climate and tastes, terroir and fashion, style and substance.

Niggli’s personal portfolio, produced by under the ‘Markus’ label, have been described as ‘feminine’, but I don’t see it—I see, perhaps, the opposite:  These wines are intense and angular, cool and daring…  just like the winemaker.