Mike McCay is on a treasure hunt to rival the most passionate pirate, the most corybantic Conquistador, the most frenzied ‘49er.  For a Mike strike, where the gold is closer to scarlet purple, he doesn’t need to cross any bounding mains or monstrous mountains, but he does have to wade through a pretty wide expanse of Lodi grape juice in order to track it down. 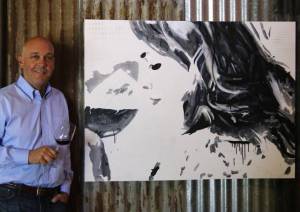 At the end of every one of McCay’s rainbows there’s a pot filled with something he can transform into enological gold:  Grapes from small, isolated vineyards scattered throughout Lodi wine country, occasionally neglected but more often producing fine juice that gets lost amid the production sea that major players like Gallo and Constellation suck up annually.  Frequently, this ignoble fate has been the result of land passing through families, where generations of patriarchs were content to have a regular, reliable customer for the produce every year.

These days, some of the sons and daughters have recognized that there might be a better market in small-lot productions and labels that sell for more that a fistful of dollars at Big Box outlets.

According to Mike McCay, who has already identified many of them, there are untold others out there, furtively flourishing, surreptitiously setting,  privately producing superb wine grapes, often right beneath the noses of the most observant geek from the Lodi Native project.

Mike McCay is a cornerstone of that group, which is dedicated to the proposition that all vineyards are not created equal, and I’ll refer to it again shortly.

I’m not sure I’ve ever been in a wine region where there is such a dramatic fault line between the viticultural generations, but that’s probably because I’ve never before been in a wine region quite like Lodi.  It’s the bread basket of California wine, producing a quarter of all the wine grapes in the state, but it also has a remarkably quality-friendly climate, with the sort of diurnal temperature shifts required to produce fully ripened grapes while safeguarding vital acidity. As such, the old guard growers had one commercial mindset while their spawn, in many cases, has another.

The American wine revolution (where our wines began to compete on the global stage) straddled that generational shift like the Colossus of Rhodes; one foot in the old world and the other in the new. 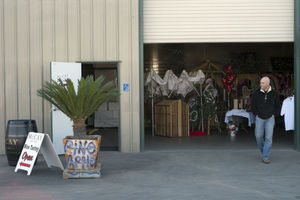 McCay is a pretty rugged example of the new.

He dragged himself out of a sick bed to hook up with me inside his tasting room, which happens to be about as unlovely a  location, at least from the outside—inside a warehouse backed up in an industrial park off E. Turner—as you could imagine.  But the sort of expansive-yet-cozy interior they’ve eked out here, staffed by bright, pretty young women and ringed with nominally decent artwork for sale, saves the day.  Toss in the spectacular range of wines produced in barrel quantities and relying exclusively on native yeasts while focusing on the ‘trueness’ of winemaking, and you’ve got a home-run like the one that broke the Louisville Slugger that McCay—a lifelong Giants fan—displays above the juice cooler.

I’ve met a few winemakers in Lodi whose original life’s mission was to make wine, but I’ve met more than a few whose primal mission wasn’t.  McCay is in the second category—he studied Marine Biology in UC Santa Barbara and soon decided that as far as primal missions go, taking plankton samples inside a mini-sub at midnight didn’t have much to recommend it either.  So he bought ten acres of Lodi land in 1994, farmed it to wine grapes successfully (farming something unsuccessfully in Lodi is something you have to work at), and began to vinify for himself in old milk vats.  He also had a chemistry background, which helped him come to terms with the treasure trove of vineyard sites throughout the region.

“I make wine in a style that I like, not necessarily to flood the market,” he says.  “If I do it that way, I can maintain the passion for my product.  It’s a lot easier to sell stuff you like.”

“Look around,” he continues, indicating the somewhat primitive ambience.  “I don’t court throngs of visitors; people come here to seek them out.  I don’t need sales reps—restaurants call me.” 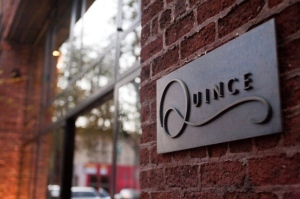 No brag, ma’am—just fact.  McCay Cellars wines can be found in some of the trendiest restaurants in California, like Quince in San Francisco, Biba’s in Sacramento and Nobu in Malibu.  These tend to be sommelier-friendly wines; wines that are clean and bracing, an honest exposé of the fruit.  His batch sizes are miniscule—he produces about 4500 cases annually, but 20 to 25 different wines.  His reds are intense—big without being muscular, assertive without being aggressive, opulent without being gilded.

But the whites were the real show-stoppers for me, because—silly boy—I didn’t yet realize that the Lodi terroir is so superbly suited for producing  layered, silken, spicy whites that when the French delegations come to town, they’re shocked that Lodi does not produce more of them.

Vinter/growers like Mike McCay are trying to edge the needle over.  For him, there are two periods during each vintage that he rates as monumentally more important than any of the others: The January prune and veraison, when he begins to drop fruit to determine ultimate yields per vine.

“If that’s not handled correctly, problems turn up later that the winery can’t fix.  When I buy grapes from other vineyards, I try to bring the growers over to my side early, even when they think I’m nuts, being wasteful.  I tell them I’ll pay them for eight tons an acre, then make them drop fruit so that they only produce three.  But that’s key.  Do a good job in the vineyard, and the wines will take care of themselves.”

I could (and did) rave about his exotically tropical and floral Viognier, but I stopped the presses over his Muscat, 2013.  It’s rare to see anyone outside the Grands Crus of Alsace attempt—let alone nail—a dry style of this sometimes overly-perfumed varietal.  Here, the aromatics were anchored, reined by elegance and a striking herbal nose, with woodruff and lavender hovering above oregano and ginger.  The tones were subtle, but luscious, with honey and lychee and the somewhat passé descriptor ‘muskiness’, which is actually sort of a perfumed and earthy spice, a hallmark of the grape.

This emerged as my personal favorite of the whites, but the red are a toss-up of superlatives.  All are deliberately extracted to the point that you take notice, but not to the point where you’re knocked down.  Cinsaut, Carignan, Petite Sirah, all from vines that range in age from thirty years old to over a hundred.

But, true to the heritage grape of Lodi, it is in the Zinfandel that Mike McCay sends his enological feelers out across the appellation, currently producing six vineyard-designated Zinfandels, with three more coming next year.  And, in the future, I imagine that he’ll bottle as many labels as unique terroirs his perpetual-motion treasure hunt turns up.

Naming a vineyard on a bottle of American wine is a tradition that post-dates most of these plantings; Heitz Martha’s Vineyard Cabernet Sauvignon was the first, and that didn’t happen until 1966.  As a marketing hook, it has probably been somewhat abused, since the cachet that a winery is aiming for is the suggestion that a named vineyard is a better vineyard, and that’s not always the case.

In the Lodi Native Project’s case,  you can be pretty sure that it is.  These innovative cheerleaders have taken solemn vows on the souls of their progeny to adhere to sensible viticulture and minimalist winemaking techniques, especially, using native yeasts exclusively, oak sparingly and filtering/fining not at all.  It’s a Zinfandel project, but ironically, the focus of the wine, from six growers who are part of the collective, is not on the flavor of the varietal but the flavor of the vineyard.  Five of the growers are in the Mokelumne River sub-appellation, and one is in Clement Hills.

The press for the Project has been phenomenal, probably because the group’s mission statement includes us little old wine writers: ‘To demonstrate to more sophisticated consumers, media (print and blogosphere…’ and don’t we just sit up and take notice when somebody in the winery sits up and takes notice?(!)

Not much to notice at the McCay tasting room beside the lovely lass with the pour spout and the array of pure, terroir-driven wines that raise the bar for the whole Lodi wine game.  The setting may put the ‘industrial’ back in ‘chic’, but as far as a treasure hunt, I see no reason to look farther.

Let’s drink and leave Mike to do the heavy lifting.