…I’m taking a brief sabbatical from Intoxicology Report to write a pair of wine books.  ‘Norton Wine: Walking Off To Look For America’, a book about a genuine native American varietal that can, in its best incarnation, rival vitis vinifera.  And ‘Starstruck In Lodi Again’, a book about that fascinating California appellation where some of the most intense and underappreciated wines are coming into their own.

In the meantime, I am releasing in serial form a supernatural novel set in the streets of Detroit,‘The Jinx Fragment’.

I will link the novel here with an excerpt from each chapter as it is released, and if you want more, you can follow the story through the ethers.  The novel is illustrated by my son Jesse, who has a supernatural gift of his own…

There was a long, deep stretch of the Little T River between Mason Bend and Old Tracy Road with a suspension bridge that straddled it. Here, if you knew where the plunge pools were and knew how smallies migrate—upriver in the springtime to spawn and back to Aceline Lake to winter—you could pull bass from the water until your arms gave out with exhaustion simply from setting the hook.

The Cherokee knew this—that’s why they put fish weirs here—and the black boys who picked berries and sold scrap iron in Knoxville knew it.  You could fine other fish in the heads and pushes of the Little T—redhorse sucker, bream, bluegill and catfish—but in Mason, Tennessee, smallies were king. And you knew a fat two-pound bass would make a wonderful supplement to the supper table of families living in persistent, generational poverty, growing gardens on old plantation lots, canning, making everything and buying almost nothing.

Dezmon Moore knew where the smallies were, although overall, he had it better than the other kids. His Daddy was Reverend Otis Turner Moore who served as conference evangelist at the Chapel African Methodist Episcopal Zion Church and the supper table was usually heavy with gifts from the congregation: Salt-cured ham, four-layer stack cake, wild turkey taken from the bordering miles of wooded hillside owned by Appalachian Iron & Coal, and Dezmon’s favorite, grits and red-eye gravy Gammy made from black coffee and bacon drippings.

A single family portrait remains from this time. It shows Otis in an immaculate pearl-colored suit and a white Borsalino hat, Bible-black and erect with religious rigidity.  Next to him, his wife and first cousin Devieta Moore holds the hand of ten-year-old Dezmon, also in a suit, with his right hand in his pocket. In Devieta’s arm is the baby Chevron; she’s clutching him as if with strange anguish. Behind them, the quaint, white-washed country church rises with its hipped-roof belfry.

The picture portrays the town face of the pastor’s dynasty; you’d have to peer closely into the pinched expressions to see the emotional dissonance, the dark negations, the nullifications and the tracks of violence.

Otis Moore was a secret fellow: He had the gift of gab, but he also had some acute pathologies and some were criminal. He was an alcoholic con man and a brutal autocrat and the church was his private playground. He filled the narrow, shotgun parsonage with terrifying stories of sin and retribution and was the sort of man who wouldn’t be told that he couldn’t do such a thing or have such a prize;  he reacted to the humiliation and degradation he’d suffered in savage America by brutalizing those around him.

His congregation was terrified of him, but they were simple folks who had grown with the discipline of Zion Methodism and they had historical faith in their leaders. Reverend Otis was salvation incarnate, and to them, that was as clear as the shine he kept in a quart jar beneath his pulpit.

So for Dezmon, the easy path was the one that led to the flaming tufts of wild azalea beneath the cottonwoods and down to the suspension bridge over the Little Tennessee River. There, he had a private pool by the shoal where people discarded Christmas trees, and this was a place where the panfish gathered; here was the spot that he spent time with his pole and the tarnished brass cornet that he’d been given by the church’s choir director. There, he learned to cast and angle and work out notes on the horn without disturbing his raging father. There he found solace with sunlight blazing, ravens cronking, breezes soughing and there, he was not swallowed by despair. 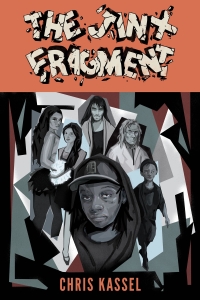 His mother had it worse. She had the multitask of keeping the children safe, keeping the church body fooled, covering tracks and keeping her husband sober enough to minister without a major malfunction.

The year after the family portrait was taken, Reverend Otis tried to strangle his wife with an electrical cord but was too shit-faced to succeed.  Afterward, he disappeared for a week and Devieta had to make up some story about a Christian Education Conference in Dallas. But at the end of the week he was shoved half-naked from a Cadillac Fleetwood by a very young woman, and adding insult to the injury, the drop-off happened directly in front of the chapel during the Women’s Home & Overseas Missionary Society meeting.

The Bishop of the Piedmont District was summoned, but by the time he showed up, Devieta and her sons had flown the coop and moved north to stay with her sister Claretta and Claretta’s daughter Sparkle on Cavalry Street in southwest Detroit.

Otis came looking for her once, but only once since Claretta’s baby daddy was a big motherfucker and a police officer, and he thumped the Bible thumper and sent the fat fool into the next chapter of his life with a concussion.

This entry was posted in Uncategorized and tagged Chris Kassel, Jesse Kassel, The Jinx Fragment. Bookmark the permalink.

2 Responses to ‘The Jinx Fragment’: Chapter 2